A teacher instructs students on the use of laptops at a container library. — Photo dantri.com.vn

(VNF) - Coming back to school after summer break, the teachers and students at Phan Ngoc Nhan Primary School in the central province of Quang Nam were surprises to see a used shipping container on their school yard.

The container is a present from the Dariu Foundation, a non-government organization from Switzerland to the school and has been turned into the school’s new library, painted in an eye-catching orange color and outfitted with a glass door and windows.

"No one imagined that we would have such a perfect library,” says school principal Luu Cuc. The air-conditioned room contains over 1,000 books, four desks and dozens of chairs. Four laptops connect the library to the internet. “No one thinks they are in a container when they come in,” Cuc said.

“We call it a five-star library,” Cuc said, adding that it was far superior to the school’s previous library, which failed to meet the demand of its 800 students.

Since the 27 sq.m container was opened, it has become a favourite destination of many students during breaks and after school.

A fifth grader, Nguyen Thanh Quy, said he usually went to the container library after school to relax and read new books. “I find many interesting books here. I will read all books in this library,” Quy. said.

In 2015, the first container library was built by Darius Foundation, in collaboration with Maersk Vietnam at the Long Binh Dien Secondary School in the Mekong Delta province of Tien Giang as part of a project to build libraries for children in rural areas. 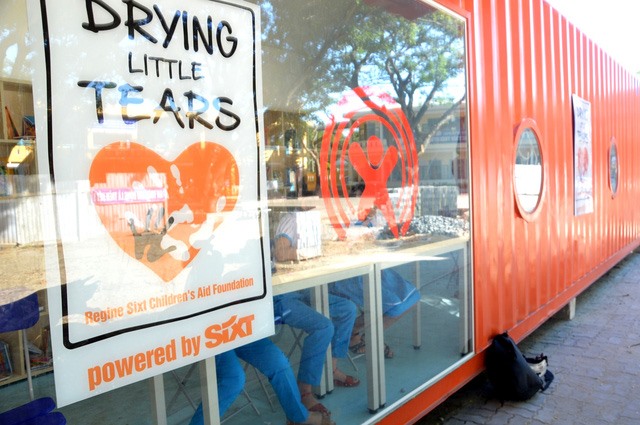 A used container turned into a library in Phan Ngoc Nhan Primary School in the central province of Quang Nam. — Photo dantri.com.vn

Mobile libraries provide children in rural areas with the opportunity to access books they would never have otherwise, as well as laptops with access to the world wide web. The libraries are expected to help narrow computer skill gaps between children in urban and rural areas.

All schools in Vietnam are supposed to have a library. However, school libraries often fall short of the needs due to modest investment.

In rural areas, children are facing numerous disadvantages to get access to reading materials.

At a recent conference on books for children in rural and mountainous areas, experts said there were 100 publishers throughout the country and 13,700 book stores and book centres, and nearly 300 private publishing companies. However most of the companies were based in large cities while there are very few publishing units in remote areas.

Some localities such as Yen Bai and the southern province of Dong Thap, have organised mobile libraries to serve children in remote areas.

Last year, the Library Department under the Ministry of Culture, Sports and Tourism established a project to open mobile libraries in cars, funded by private sources. As many as five such cars have reached five provinces -- Son La, Quang Nam, Nghe An, Gia Lai and An Giang.

Carrying both books and computers, these vehicles have been a boon for children in remote areas.

In other provinces, many people and groups have volunteered to bring books to needy children. The most active project among these is Sach Hoa Nong Thon (Books for Rural Areas), initiated by Nguyen Quang Thach. For more than 10 years, Thach and his colleagues have set up nearly 10,000 book cases in various provinces and cities.

Thach, 41, founder of the Centre for Knowledge Assistance and Community Development, spent 19 years studying library design and applying library models, with his first three libraries in 2007.

In 2016, Books for Rural Areas won Thach the 2016 UNESCO King Sejong Literacy Prize, a credible acknowledgement from the United Nations for his efforts in broadcasting knowledges in disadvantaged areas.

The programme is part of a campaign to encourage reading in Viet’s rural areas by bringing books to libraries and bookshelves in those areas, with an aim to motivate children to read more books and improve their general knowledge.

To date, the number has increased to more than 9,000 small libraries in 26 provinces.

It will be expanded throughout the whole country by 2020 under the support of the Ministry of Education and Training and the Ministry of Culture, Sports and Tourisms as well as the engagement of millions of local people and Vietnamese overseas.

Meanwhile, in Thanh Hoa, the Tu Sach Lam Son (Lam Son Bookcase) project by intellectuals and the business community from the province has also supported schools in setting up bookcases in their classrooms.

In Nam Dinh Province, a group of businessmen from Hai Hau district has launched a programme to set up 12,662 bookcases in the locality. The aim is to supply enough books to 10 districts in the province, benefiting children from kindergartens to high school students./.