Another geopark in Vietnam wins global status by UNESCO

The Central Highlands province of Dak Nong on November 24 received a certificate recognising its geopark as part of the UNESCO Global Geoparks Network.

The Dak Nong Geopark is the latest member of the global network and the third to obtain this title in Vietnam.

It covers an area of more than 4,700 km2, accounting for more than two fifths of the natural area of province and spanning over six out of eight districts and cities of the locality.

The geopark can be reached by several routes by land and air, including two international border gates with Cambodia. Characterized by sub-equatorial tropical monsoon and plateau climate, the area features an evenly distributed network of rivers, streams, lakes and reservoirs. About 416,000 people of 40 ethnic groups live in the area, occupied mostly in agro-forestry, trade and services, and small industries.

Many archaeological, historical and cultural relics as well as scenic spots are recognized and conserved. Many festivals and traditions celebrated by ethnic cultures, in particular the UNESCO “Gong Culture Space” intangible heritage also contribute to the values of the Geopark.

According to domestic and foreign scientists, the geopark has about 65 heritage sites, geomorphology, including a system of craters, a system of volcanic caves and waterfalls.

Worthy of note is that it has the most massive volcanic cave system in Southeast Asia with 50 caves stretching over a total length of more than 10,000m. the geopark also boasts many unique cultural identities of indigenous ethnic minorities such as M’Nong, Ma, Ede…

At the ceremony, Michael Croft, UNESCO Chief Representative to Vietnam, highlighted Dak Nong Global Geopark’s natural beauty and unique culture of indigenous people, which he said should be preserved during the process of economic and tourism development, VOV reported.

He called on local authorities and people to contribute to this preservation process and said UNESCO will work closely with local authorities towards exploiting the geopark’s tourism potential in a sustainable manner.

On July 7, the Programme and External Relations Commission of the 209th UNESCO Executive Board approved the Global Geoparks Council’s proposal to recognise the Dak Nong Geopark as a global geopark, the Vietnam News Agency said.

Earlier, the Dong Van Karst Plateau in Ha Giang province and the Non Nuoc Cao Bang Geopark in Cao Bang province, both in the north of Vietnam, had been named members of the Global Geoparks Network.

Vietnam is seeking to set up four more geoparks in Quang Ngai and Phu Yen provinces in the central region, Gia Lai in the Central Highlands and Bac Kan in the north./. 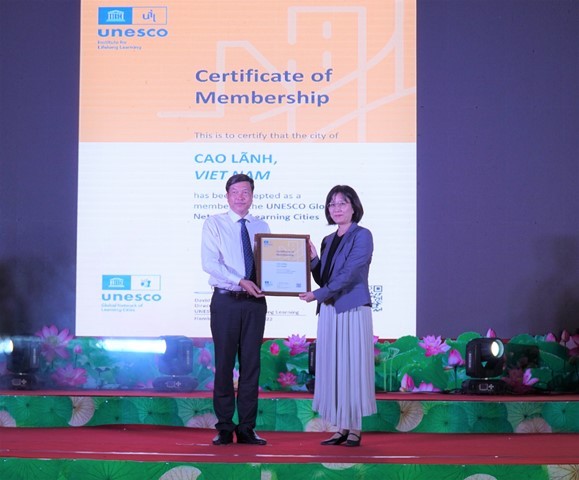 Cao Lanh, the capital city of the Mekong Delta province of Dong Thap, celebrated its membership in the UNESCO Global Network of Learning Cities (GNLC) with a ceremony on November 19.
November 21, 2022 | 07:37