Copa America 2021 final: When it is, venue, TV channel, streaming & how many fans can attend

Brazil became the surprise last-minute host of Copa America 2021 after it emerged that Argentina and Colombia would not be able to co-host the South American tournament.

The fourth Copa since 2015, the likes of Lionel Messi and Neymar have been to the fore, with Argentina and Brazil among the favourites to lift the coveted trophy, according to Goal.

Due to time difference, in the United Kingdom (UK), it will strictly take place on Sunday July 11 at 1am BST.

Fox Sports 1 and Univision will show the Copa final on TV in the U.S., with streaming platforms such as the TUDN app, Univision NOW and the Fox Sports app also showing the game.

Where is the Copa America 2021 final being played?

It is the second Copa final in a row that the iconic venue will host, having last been the stage for the 2019 Copa America final, and the third time overall.

Situated in the Maracana region of Rio de Janeiro, the stadium is one of the biggest football grounds in the world and has played host to two World Cup finals as well as the Olympics.

First opened in 1950, its current capacity comes in at just under 80,000 for football matches, but the venue remarkably held nearly 200,000 spectators in the past.

How many fans can attend the Copa America 2021 final?

Fans are not expected to be permitted to attend the Copa America 2021 final due to public health restrictions aimed at curbing the spread of Covid-19.

No spectators have attended any of the competition's games and, while there have been some rumours of a limited number being allowed into the Maracana, nothing official confirms that suggestion, as reported by Goal.

Brazil, who have never lost a Copa America on home soil and have won every match so far in this year’s edition will play against Argentina on July 11.

Brazil will seek its 10th title in the South American championship.

As reported by Inside Sport, Brazil were made to work really hard by Peru as they reached the Copa America final with a 1-0 win in Rio. The two sides both had their chances in the opening 30 minutes, but it was Brazil that took the lead when some fancy footwork from Neymar allowed him to escape three defenders and lay the ball off for a fine first-time finish from Lucas Paqueta.

A beautifully crafted cross by Neymar after evading from 2 defenders gave Paqueta an open shot at goal.

With no defender around, Paqueta volleyed the ball home to give Brazil the lead in the 35th minute. Brazil dominated most of the 2nd half but Peru missed some major chances to level the game.

Lionel Messi's Argentina got another chance to end their international title drought with a thrilling Copa America 2021 semi-final win over Colombia in Brasilia early Wednesday morning. And the hero of the high-octane clash was goalkeeper Emiliano Martinez, who blocked three Colombia spot-kicks at Mane Garrincha Stadium. Meaning, a Messi vs Neymar clash in Argentina vs Brazil final.

With no extra time in the knock-outs for this edition of South America's top football tournament, Argentina and Colombia headed to the shoot-out after ending the normal time 1-1. Then the drama unfolded as a confident Aston Villa goalkeeper denied Colombia their third final appearance, according to Outlook India.

For Argentina, Sunday's title clash against bitter rivals Brazil will be the 29th final. They last won the continental title in 1993, and lost the finals in 2004, 2007, 2015 and 2016. They had also finished third last term, after losing to Brazil in the semis.

During this period, on the global stage, Argentina came close to winning the World Cup in Brazil. But a Mario Gotze extra time goal ended their dreams in 2014 final. Now, Brazil presents Albiceleste with another chance to redeem themselves.

Colombia were bidding to reach their first Copa America final after failing in their six previous semifinals in a neutral venue. They only reached the final playing at least one game at home (1975 and 2001). And they looked a motivated lot.

Juan Cuadrado opened the shoot-out, beating Martinez. A bloodied Messi then buried Argentina's first to make it 1-1. Martinez guessed correctly to block Davinson Sanchez's kick and advantage Argentina. But Rodrigo De Paul failed to capitalise as he blazed over the bar. 1-1 after two kicks each.

Martinez produced another block, by leaping to his right to deny Yerry Mina. Leandro Paredes sent Ospina the wrong way to give Argentina a 2-1 lead after three kicks each.

Miguel Borja scored for Colombia but Lautaro Martinez, who opened the scoring during the open play in the seventh minute, made it 3-2 after four each. His namesake under the bar did it again by blocking Edwin Cardona. And Argentina won the shoot-out 3-2.

The 14-time champions took the early lead courtesy of a fine strike from Martinez (7th minute) after Giovanni Lo Celso linked up with Lionel Messi, who set up the Inter Milan forward. It was followed by chances from either side.

Argentina came close to doubling their lead when Nicolas Gonzalez picked up a header from Lionel Messi's corner-kick. But he was denied by David Ospina from close range.

Colombia's first real chance soon came but Cuadrado was denied by Martinez from close range. Then, Wilmar Barrios tested Argentina defence with a bullet shot from the edge of the box that hit Martinez's left upright after getting a deflection off Lo Celso.

Colombia, keeping the pressure on, forced Argentina's goalkeeper to produced a stunning save from a Mina header from a corner-kick.

Colombia, who defeated Argentina 2-0 the last time they met in Copa America in 2019, continued their domination after the restart. Then, Argentina were caught napping in the 61st minute with Luis Diaz scoring a beauty after a brilliant run following Cardona's release in the left flank. The FC Porto forward beat Martinez from a tight angle to get the deserved equaliser.

In the 73rd minute, Argentina failed to take the advantage after Colombia goalkeeper, for all his experience, left his post allowing Angel Di Maria to dribble past him. The PSG player, who came in for Gonzalez in the 68th minute, then released it for Lautaro, whose shot at the goal was blocked by Barrios. Di Maria, from the rebound, sent it wide.

Argentina got another chance to restore the lead in the 80th minute after Di Maria found Messi with a through ball. But the skipper's left-footed shot hit the right post.

Ten minutes later, Messi hit the wall from a free-kick, and it was their last lance in a frenetic closing minutes before heading for the penalty shoot-out.

Argentia and Brazil meet at the iconic Maracana in Rio de Janeiro on Sunday, while Colombia remain in Brasilia for their third-place play-off against Peru on Saturday.

Argentina (14) will become the joint-most successful side with Uruguay (15) if they beat Brazil. While Neymar's Brazil are chasing their 10th title. They are the defending champions. 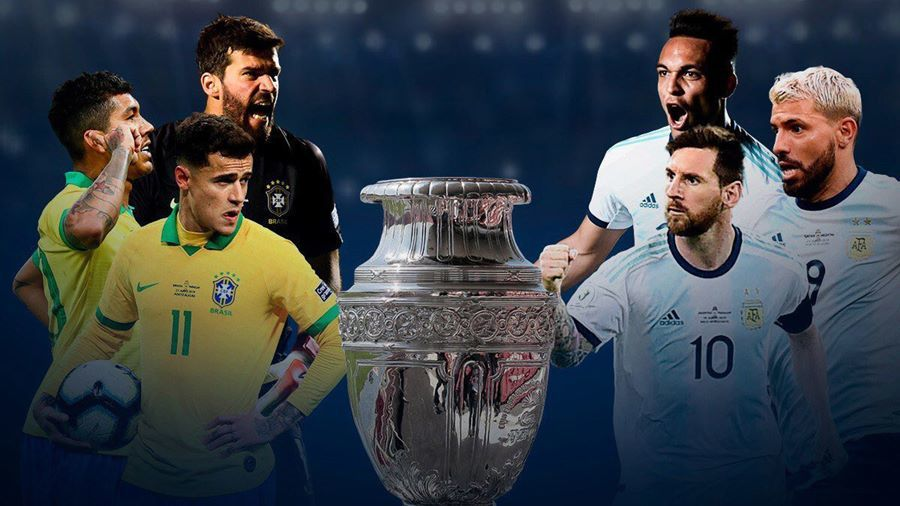 Brazil and Argentina will face each other in the final of the 2021 Copa America tournament on Saturday night. With both sides steeped in history in this competition, Brazil will aim to win the trophy for the 10th time, while their opponents would add a 15th Copa America title to their trophy cabinet with a win.
July 10, 2021 | 17:31