An abrupt decision to close all schools in more than two dozen localities to prevent the spread of the new coronavirus late on February 2 night has caught parents off guard, forcing many to desperately seek for an alternative to their children’s daycare. 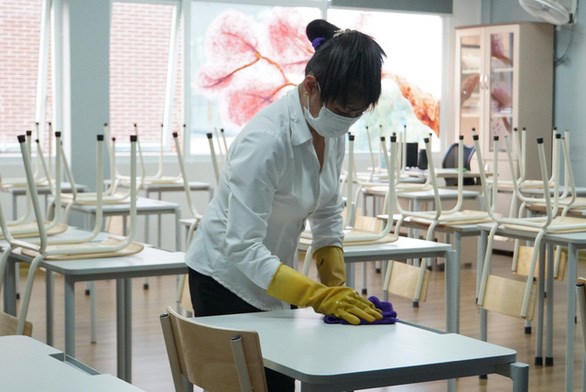 The Government Office on February 2 night issued an urgent document allowing all kindergartens, schools and colleges across the country to close amid an on-going public health emergency caused by the new coronavirus 2019-nCOv. Thirty-three localities, including Hanoi and HCM City, immediately ordered schools and education facilities to close starting on Monday. Many schools will be closed for a whole week.

Phan Thu Ngan, an office worker of a tech company in Hanoi, was only notified by her child’s kindergarten in the late hours of Sunday. Both Ngan and her husband had to go to work so she had to ask her mother to look after the toddler for the week.

“But the notice came quite in a rush so I had to take a half-day of leave this morning, waiting for my mum to arrive from the countryside. I’m going to go back to work in the afternoon,” Ngan told VietnamPlus newspaper.

Another mother Nguyen Thu Thuy from Cau Giay district also sought help from grandparents to take care of her children – one in primary school and another in kindergarten.

She said that she took a day's leave on February 3 to take the kids back to her hometown in Tuyen Quang province, and planned to leave them there with their grandparents until next week when schools are set to reopen.

“Actually I’m relieved that the kids don’t have to go to school. They’re still very young so they don’t know how to protect and take care of themselves against the disease. It would be worse if they caught the virus,” Thuy said.

But not everyone could turn to their family for help.

Many parents on Monday shared pictures of their children going to work with them on social media. Some expressed fears of taking their kids to crowded workplaces during the outbreak, but they had no other choice.

Mother Vu Thuy Dung said that she and her husband decided to take leave in turn so there would always one parent at home with the kids.

“We also planned to send the children to their aunts and uncles. But we can only manage for one week. If schools remain closed for longer, we don’t know what we can do,” she said.

As of February 3 night, 50 provinces and cities out of 63 in the country have announced days off for students, with 30 allowing up to one week off (February 2-9), at least for the time being.

Tien Giang, Ninh Thuan and Hai Phong are closing schools for three days from February 3 while Cao Bang and Soc Trang have students off on February 3 and 4.

The central province of Ha Tinh said the break will start from February 4 until further notice, without signifying an end date.

Khanh Hoa, where a Vietnamese receptionist was infected with the coronavirus due to contact with Chinese tourists, announced all schools would close from February 3 until further notice./.

Over 420 officers, soldiers in Quang Ninh get prioritized Covid-19 vaccine

NTUC LearningHub Survey: Despite More Employers Seeing the Importance in Training in the Wake Of Covid-19, Not Enough Is Being Done to Upskill Workers