As of October 11 night, torrential rains claimed 17 lives, left 13 missing and forced the evacuation of 49,700 others, according to the Central Steering Committee for Natural Disaster Prevention and Control.

The storm has uprooted dozens of trees, blown off the roofs of around 20 houses and sunk a fishing boat with a father and son on board in Quang Nam.

A tropical depression began brewing in the Bien Dong Sea (South China Sea) soon after Storm Linfa made landfall in the central region.

The eye of the depression was 770 km to the east of Vietnam's Hoang Sa (Paracel) archipelago on October 11 afternoon with 50 kph winds.

In the next 24 hours, it is likely to move west-northwest at the 10 kph, and could grow stronger as it moves, the National Centre for Hydro-Meteorological Forecasting said.

As of October 12 afternoon, it would be centred at around 450 km east-northeast of Hoang Sa with maximum wind speeds of 60 kph.

Due to the influence of the tropical depression in combination with a tropical convergence zone and a cold spell moving down from the north, almost all coastal areas of Vietnam would see heavy rains and rough seas, the centre cautioned.

Linfa was the sixth storm to have formed so far this year in the Bien Dong Sea. The fifth one, named Storm Noul, killed six people last month. 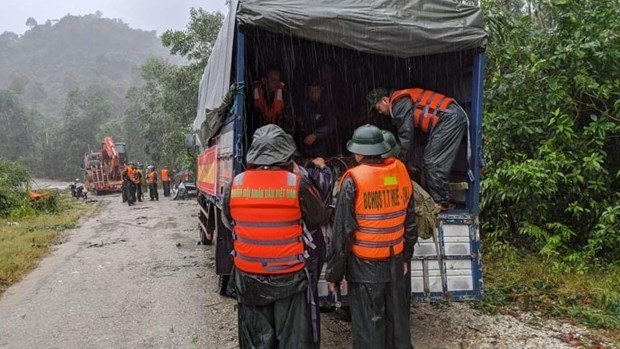 The Vietnamese Embassy in the United States received a number of artifacts and antiquities from the FBI
August 09, 2022 | 07:50
Phiên bản di động