If you are tired of staying in a normal or five-star hotel and want something new, ICEHOTEL in Sweden is where you can experience the mesmerizing natural beauty of ice, coldness and other interesting activities.
Charlotte Pho
September 23, 2021 | 15:23

The Icehotel is a hotel rebuilt each year with snow and ice in the village of Jukkasjärvi, in northern Sweden, about 17 kilometres (11 mi) from Kiruna. It is the world's first ice hotel.

After its first opening in 1990, the hotel has been rebuilt each year from December to April. The hotel, including the chairs and beds, is constructed from snow and ice blocks taken from the nearby Torne River. Artists are invited to create different rooms and decorations made of ice. Besides bedrooms, there is a bar, with glasses made of ice and an ice chapel that is popular with marrying couples. The structure remains below freezing, around −5 °C (23 °F).

History of the Icehotel

In 1989, Japanese ice artists visited the area and created an exhibition of ice art. In Spring 1990, French artist Jannot Derid held an exhibition in a cylinder-shaped igloo in the same area. One night there were no rooms available in the town, so some of the visitors asked for permission to spend the night in the igloo at the exhibition hall. They slept in the igloo in sleeping bags on top of reindeer skins, and were the first guests of the "hotel".

Why is it called “Icehotel”?

The entire hotel is made out of snow and ice blocks from the Torne River, even the glasses in the bar are made of ice. Each spring, around March, Icehotel harvests tons of ice from the frozen Torne River and stores it in a nearby production hall with room for over 900 t (990 short tons) of ice and 27,000 t (30,000 short tons) of snow. The ice is used for creating Icebar designs and ice glasses, which are used for ice sculpting classes, events and product launches all over the world while the snow is used for building a strong structure for the building. About 900 t (990 short tons) of what is left is used in the construction of the next Icehotel.

When completed, the hotel features a bar, church, main hall, reception area, plus about 100 guest rooms. The room rate starts at 1500 kr. The hotel also hosts an ice restaurant. The furniture is sculpted blocks of ice in the form of chairs and beds. The thick walls, floor and ceiling are made of ice. Even the beds, the fittings and decoration are carved from ice. No two rooms are the same; the rooms are unique works of art. At the Icehotel the beds are lined with reindeer furs and people are given special equipment to use while sleeping in the hotel. The guests sleep in polar-tested sleeping bags. There is no heating and the bedroom temperatures are constantly around −5 °C (23 °F). There is no plumbing at the hotel, but there is a sauna that is run on the premises of the Icehotel with a hot tub outdoors.

The ice suites do not have any bathroom facilities but bathrooms for guests are found in a warm building close by. There is also warm accommodation available next to the hotel. The Icehotel in Jukkasjärvi is known to be the biggest hotel of ice and snow in the world, spanning over some 6,000 square metres (64,600 sq ft). Each suite is unique and the architecture of the hotel is changed each year, as it is rebuilt from scratch. Each year, artists submit their ideas for suites, and a jury selects about 50 artists to create the church, Icebar, reception, main hall and suites. When spring comes, everything melts away and returns to the Torne River. The Icehotel only exists between December and April, and has been listed as one of the Seven Wonders of Sweden. The northern hemisphere's aurora borealis can be seen during the winter months in the location.

Can you sleep in the ICEHOTEL?

Yes, you can spend the night in the ICEHOTEL. It’s an incredible and totally unusual experience that you can boast about when you get home!

The hotel rooms are kept at a temperature of between -5 and -8°C (23 and 17°F) to ensure that the ice stays intact. They are beautifully adorned with hand-sculpted ice art and you sleep on a bed of ice. But, to make it comfortable, you have a thick mattress, thermal sleeping bags and reindeer hides.

The Riverside Lobby is open 24/7 and it’s where you can use the bathroom and shower. After sleeping in your cold room, you can get changed here, warm up in the sauna, and enjoy a hot cup of lingonberry juice.

Alternatively, you can opt for a guided tour of ICEHOTEL if you’d rather not spend the night here.

What else to see at Icehotel?

The local parish of Jukkasjärvi, part of the Swedish Church, runs the Ice Church. Following co-operation with the Icehotel, the Swedish Church operates the Ice Church as a regular church. Each year the church is consecrated at the Christmas Day service. During the winter period around 140 couples get married and about 20 children are baptized. Most of the baptized children live in the parish or have parents living there. The wedding coordinator can arrange for civil ceremonies to be carried out. Characteristics of a wedding in the Ice Chapel are the cold, the stillness, and a cappella singing. Reverend Jan-Erik Kuoksu from the Jukkasjärvi parish started the Ice Church. During his 17 years of service he has united 1,500 couples and baptized many children. Kuoksu worked alone as the priest in the Ice Church for the first 14 years. His wife, Lisbeth, volunteers as a church usher.

Icehotel AB searched for business partners during the early and mid-1990s, and the founder, Yngve Bergqvist, decided upon Absolut Vodka as the first sponsor. The first Absolut Icebar opened in Icehotel in 1994, and today the concept is used in three cities: London, Stockholm and Jukkasjärvi.

Several high-profile events around the Icehotel have since been initiated by Absolut Vodka. In 1994, the extension was an advertising shoot for Absolut Vodka to Jukkasjärvi, with photographer Herb Ritts. Models Kate Moss, Naomi Campbell, Mark Findlay and Marcus Schenkenberg were photographed surrounded by ice, wearing creations designed by fashion designer Gianni Versace.

Guests are served vodka in glasses made of ice from the Torne River, often described as a drink "in the rocks". Ice glasses at the bars are brought from the production hall in Jukkasjärvi to the Icehotel. This is also the case with the interior creations, because every six months they are replaced on-site by staff from the ice production and artists. This is done to ensure quality and safety.

How do you get to ICEHOTEL in Sweden?

Although ICEHOTEL is blissfully secluded, you’ll be glad to know that it’s easy to reach. The nearest airport is Kiruna, which is only a 15-minute drive away from the hotel.

You would usually need to fly from Stockholm – Sweden’s capital – to Kiruna. The direct flight takes approximately 1.5 hours and there are several departing every week.

Dining at the Icehotel

For two night stays, you can visit both restaurants for lunch or dinner and enjoy Swedish dining at its best. ICEHOTEL Restaurant has an ‘Ice Menu’ – a 4-course degustation menu served on ice blocks. Typically this will start with a fresh selection of local fish, like salmon sashimi and lightly cured Arctic char, accompanied by moose Carpaccio served with ‘lingon-berries’.

Exotic local meats such as fillets of reindeer or Arctic ptarmigan are expertly served for mains. To round the night off, and get you in the mood for a swing on the ice dance floor and a night on reindeer felts in a rather cold room; indulge in decadent chocolate Ganache for dessert.

Can you see northern lights at ICEHOTEL Sweden?

Visit the ICEHOTEL Sweden in winter and you have a good chance of seeing the northern lights illuminating the skies. That’s because the hotel is located in a prime spot in Swedish Lapland for aurora viewing.

ICEHOTEL is situated in the Arctic Circle, where intense aurora activity occurs. In fact, this part of Swedish Lapland lies within the “northern lights belt” – an area between 65 and 72 degrees north. Experts believe that this is where high auroral frequency and intensity takes place.

Here in the far north of Sweden, you’ll find yourself surrounded by pristine landscapes carpeted in glistening snow. With little to no light pollution, you can view the aurora borealis very clearly in the dark sky.

There are also long hours of darkness in winter, giving you more time to catch sight of the lights. We recommend you take a guided northern lights tour in Lapland to increase your chances of seeing this natural phenomenon. 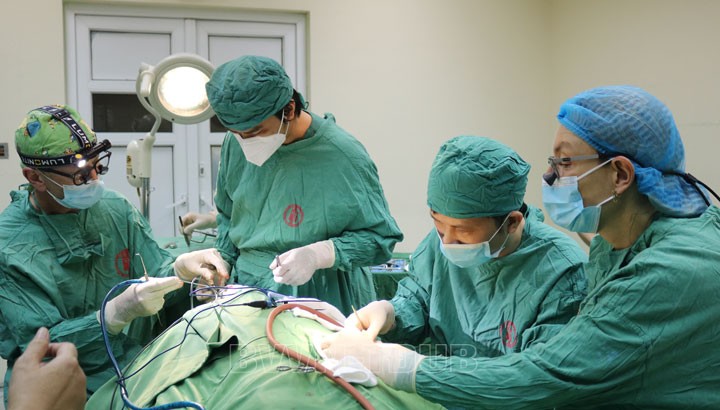 Na Hang is known by many tourists as “the forgotten paradise” because this destination seems separated from the outside world.
January 25, 2023 | 09:12
Phiên bản di động