As the first country that is Covid-19 free, Denmark is a beautiful destination with many gorgeous spots, delicious delicacies and interesting activities around the country.
Charlotte Pho
September 19, 2021 | 08:36

Denmark, country occupying the peninsula of Jutland (Jylland), which extends northward from the centre of continental western Europe, and an archipelago of more than 400 islands to the east of the peninsula. Jutland makes up more than two-thirds of the country’s total land area; at its northern tip is the island of Vendsyssel-Thy (1,809 square miles [4,685 square km]), separated from the mainland by the Lim Fjord. The largest of the country’s islands are Zealand (Sjælland; 2,715 square miles [7,031 square km]), Vendsyssel-Thy, and Funen (Fyn; 1,152 square miles [2,984 square km]). Along with Norway and Sweden, Denmark is a part of the northern European region known as Scandinavia. The country’s capital, Copenhagen (København), is located primarily on Zealand; the second largest city, Århus, is the major urban centre of Jutland.

In little over a decade, Copenhagen has gone from dining dowager to culinary powerhouse. The Danish capital claims no less than 15 Michelin-starred restaurants, more than any other Scandinavian capital. In recent years, sous chefs from numerous high-profile kitchens have spread their own wings, opening a string of thrilling new eateries where culinary prowess comes with a more approachable price tag.

Only here does the morning rush of cyclists look more like a runway show on wheels. Forget Milan; when it comes to style, it's hard to beat Copenhagen's denizens. Few people have such a knack for effortless cool, driven by a reverence for simplicity, detail and understated beauty.

From Viking treasures in a former prince's palace to iconic Danish chairs in a one-time baroque hospital, Copenhagen's cultural offerings are rich and eclectic. Snoop around royal palaces crammed with blue-blood jewels and art, muse on the world's largest collection of Danish Golden Age paintings, or get up close and personal with the finest booty of ancient Egyptian sculpture in northern Europe.

There is a very intimate and friendly feel to Dragør. If you feel peckish, there are several good restaurants and eateries to chose from here.

At the local museums located in the harbour area and in two large farm houses you can learn more about the special history and traditions, and in Summer many of the locals dress up in regional costumes and relive the past.

In the main street you will find small shops with gift items and art galleries, and down at the harbour you can enjoy nice sea views from the many excellent restaurants and cafés on the waterfront.

Dragør and the neighbouring village St. Magleby were founded by Dutch settlers who were invited by the King at the time to grow vegetables for the Court.

Fishing of particularly heerings has also played an important role in the history of the place. The settlement remains, and you can experience a very special atmosphere, narrow cobbled streets, and small colourful thatched houses.

Getting to Dragør from Copenhagen is easy. The bus 350S runs from Copenhagen City centre, and you can also bike there through the beautiful nature at the common Amager Fælled, Kongelunden Forest and by the coast.

Kronborg Castle has existed at Helsingør (Elsinore) since 1420. It’s been burned to the ground and rebuilt since, but always maintained its vital position at the head of the Øresund Sound. Ships passing into the Baltic Sea paid tolls at Kronborg Castle and Helsingør was once one of the most important towns in Europe. In 2000, Kronborg Castle became a UNESCO World Heritage Site.

Exploring the creepy crypts and catacombs of Kronborg Castle is a great experience. Hidden deep down under the castle you’ll meet Holger the Dane (Holger Danske), an imposing stone statue. Holger the Dane is a legendary figure in Danish culture. If Denmark is ever in trouble, he’ll wake from his rock throne under Helsingør and defend her!

Each summer, you can enjoy live performances of Shakespeare’s greatest plays from Danish and international companies, including the Royal Shakespeare Company. There are Shakespeare events for all the family at HamletScenen’s Shakespeare Festival at Kronborg Castle. It's a great summer day out from Copenhagen.

Aarhus is the second-largest city in Denmark and the seat of Aarhus municipality. It is located on the eastern shore of Jutland in the Kattegat sea and approximately 187 kilometres (116 mi) northwest of Copenhagen.

The largest city in Jutland, Aarhus anchors the Central Denmark Region and the statistical region Landsdel Østjylland (LØ) (Lit. Province East Jutland). The LØ is the second most populous statistical region in Denmark with an estimated population of 903,974 (as of 1 January 2021). Aarhus Municipality defines the greater Aarhus area as itself and 8 adjacent municipalities totalling 952,824 inhabitants (as of 1 January 2021) which is roughly analogous to the municipal and commercial collaboration Business Region Aarhus. The city proper, with an estimated population of 282,910 inhabitants (as of 2021), ranks as the 2nd-largest city in Denmark.

Aarhus dates back to at least the late 8th century and is among the oldest cities in Denmark. It was founded as a harbour settlement at the mouth of the Aarhus River and quickly became a trade hub. The first Christian church was built here around the year 900 and later in the Viking Age the town was fortified with defensive ramparts. The Viking Age was turbulent and violent, also for Aros, as the town was called back then, but in spite of the difficulties, the bishopric of Aarhus grew steadily stronger and more prosperous, building several religious institutions in the town during the early Middle Ages. Trade continued to improve, although it was not until 1441 that Aarhus was granted Market town privileges, and the population of Aarhus remained relatively stable until the 19th century. The 1600s, in particular, was a difficult time for Aarhus as the town suffered from several wars and the plague, and trade was also dampened by the state in favour of the royal seat of Copenhagen. Nevertheless, Aarhus grew to become the second biggest town in Denmark during that time, and in the middle of the 1700s, the once prosperous trade growth returned. The industrial revolution became an inflection point in the 19th century, as industry drove a rapid population growth, outpacing regional rivals, and the first railway line in Jutland was built here in 1862. In 1928, the first university in Jutland was founded in Aarhus and today it is a university city and the largest centre for trade, services, industry, and tourism in Jutland.

An hour and a half by train from Copenhagen, Odense is located on a quiet island with colorful half-timbered houses and crooked cobblestone streets. Hans Christian Andersen was born in the sleepy city, which this summer will see the opening of the brand-new H.C. Andersen House. Designed by Japanese architect Kengo Kuma, the museum was designed with his famous fairy tales in mind. Exhibitions include experiential tributes to the tales: in a Little Mermaid–­inspired area, for example, visitors can lie down beneath a glass ceiling to look up into a pool of water and imagine they are in the ocean. If traversing the magic of Andersen’s stories works up an appetite, the nearby Storms Pakhus street-food hall—a 100-year-old warehouse with stalls offering everything from freshly baked naan to fish and chips—is a decidedly contemporary counterpoint.

In the present day, Odense remains the commercial hub of Funen, and has a notable shopping district with a diversity of stores. Several major industries are located in the city including the Albani Brewery and GASA, Denmark's major dealer in vegetables, fruits and flowers. The city is home to Odense Palace, erected by King Frederik IV who died there in 1730, the Odense Theatre, the Odense Symphony Orchestra, and the Hans Christian Andersen Museum, situated in the house that was the birthplace of Hans Christian Andersen. In sports, Odense has a number of football clubs including OB, BM, B1909, and B1913, the Odense Bulldogs professional ice hockey team, and the city also hosts the H.C. Andersen Marathon. Odense is served by Hans Christian Andersen Airport and Odense station, which lies on the line between Copenhagen and the Jutland peninsula.

As the northernmost destination in Denmark, Skagen is a renowned town with amazing light, combined with a unique nature and white sand beaches. In the center of the city, you will find a wide selection of restaurants, shopping options, experiences for children, and interesting cultural attractions. Skagen is situated near Grenen on the east coast, whereas the old and historic part of the city Gl. Skagen is located next to the North Sea.

The vibrant town is home to a vast number of entertaining activities and events. Go shopping in the charming streets of Skagen's pedestrian precinct, or explore the great array of museums, such as the teddy-bear display at Skagen’s Bamsemuseum, the first and only museums with teddybears in Scandinavia. You can also visit the home of the famous Skagen paintings, Skagen's Museum, take a look at Anchers house and Drachmanns house.

Grenen is the most popular destination when visiting Skagen. Grenen is the place where the Baltic Sea and the North Sea, which shows in lively waves and strong currents. Råbjerg Mile, North Jutland's Sahara desert, and the sand-covered church, Den Tilsandede Kirke, are also very popular outdoor nature experiences.

Skagen has many delightful restaurants and eateries that serve delicious local food with ingredients from the two seas surrounding Skagen Odde. If you are into gourmet, Restaurant De 2 Have, Hjorths Hotel, Ruths Hotel, and Brøndums Hotel can be specially highlighted, where Ruths Gourmet and Brøndums Hotel are among North Jutland's best restaurants. You can also enjoy an exquisite seafood dish at Skagen's Fish Restaurant in the legendary and idyllic small red fish-warehouses at the local city harbor.

Whether you prefer to spend a holiday in a holiday home, campsite or hotel, Skagen has it all. Stay at Color Hotel Skagen or the classic bathing hotel Ruths Hotel in Gl. Skagen. 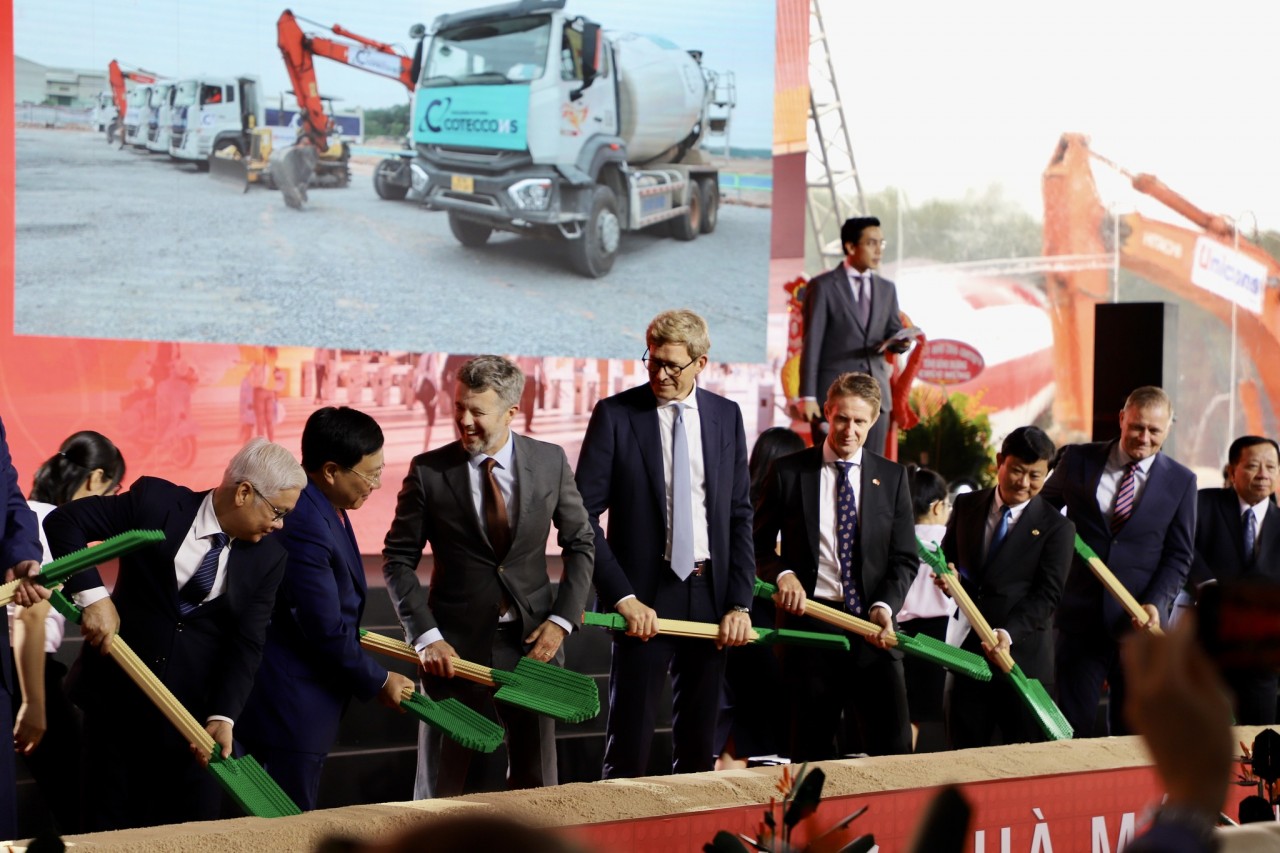