Many of Vietnam’s bridges have not only boosted transportation but also become world-famous, helping raise the country’s profile on the tourism map.

Inhabitat, a U.S.-based design and architecture website founded by world-famous designer Jill Fehrenbacher, wrote last year, "A prism of colors bathes the recently completed Nhat Tan Bridge in Hanoi, transforming it into an illuminated work of art."Earlier this year the image of the cable-stayed bridge appeared on the official website of the White House when U.S. President Donald Trump touched down in Hanoi to meet North Korean leader Kim Jong-un at their historic second summit.

Nhat Tan Bridge, also known as the Vietnam - Japan Friendship Bridge, was inaugurated in January 2015. It runs a length of 8.9 km (5.5 miles) over the Red River and has five ps representing the capital city's five ancient gates.

It cost VND13.6 trillion ($598 million), which came from the Japanese government's official development assistance (ODA) and the Vietnamese government.

The bridge, connecting Tay Ho District with Dong Anh District, opened to traffic together with the Nhat Tan - Noi Bai Highway, shortening the travel time between Noi Bai International Airport and Hanoi's center from one hour to 30 minutes.It cost VND13.6 trillion ($598 million), which came from the Japanese government's official development assistance (ODA) and the Vietnamese government.

U.K. travel guide publisher Lonely Planet described the bridge "a symbol of the tenacity and resilience of the Hanoian people" on its news site.

The 2.29-kilometer Long Bien Bridge, which connects the downtown district of Hoan Kiem with Long Bien District, was built between 1899 and 1902 by the French during their colonial rule.U.K. travel guide publisher Lonely Planet described the bridge "a symbol of the tenacity and resilience of the Hanoian people" on its news site.

It was the first steel bridge over the Red River and played a crucial role in many important historic events, including the independence wars, as the only bridge then over the river.

The bridge was initially called the Doumer Bridge after Paul Doumer, the French governor-general of Indochina in 1897. At the time of construction it was one of the world's longest bridges. After the country’s liberation it was renamed Long Bien Bridge.

The spectacular bridge held up by two giant hands that reach to the sky from the ground was an instant hit when it opened in June last year on Ba Na Hills in the central city of Da Nang.

Designed by Vu Viet Anh, design principal at TA Landscape Architecture, the bridge has quickly grabbed the world’s attention, becoming one of the most popular on photo sharing network Instagram.

It was named one of the world’s most striking pedestrian bridges by UK newspaper The Guardian last year.

Another UK newspaper,The Independent, listed the Golden Bridge in its top 10 list of the world’s most incredible bridges late last year. Other major news outlets like theBBC, AFP, Reuters, and CNN have also gushed over it.

The Dragon Bridge spans the Han River in Da Nang. It won the Grand Prize at the 2014 Engineering Excellence Award in the U.S., one of the world’s most prestigious prizes.

In 2015 the bridge was listed among the 30 ‘gorgeous bridges’ around the world by Italian-based travel and entertainment site Viralnova. CNN last year described the Dragon Bridge as "a symbol of the prosperity of Asia."

The modern bridge provides the shortest road link from Da Nang International Airport to other main roads in Da Nang, and a direct route to beautiful beaches like My Khe and Non Nuoc at the eastern edge of the city.

The bridge was designed and built in the shape of a dragon. It breathes fire and water every Saturday and Sunday night at 9 p.m., and makes the city shine in the night with 15,000 LED lights.

Last July, the image of Chua Cau (Pagoda Bridge) in the ancient central town of Hoi An appeared on the homepage of Google, making it the first Vietnamese destination to be honored thus.

The national relic that appears on VND20,000 bills is an iconic landmark of the 400-year-old town.

The bridge was built in the early 17th century by Japanese traders who once made up a large part of the town’s population.

A small shrine was built at one end of the bridge in 1653 to worship the God of Weather, who was believed to have the power to prevent natural calamities and bring happiness and wealth to people, and since then many have called it the Pagoda Bridge. 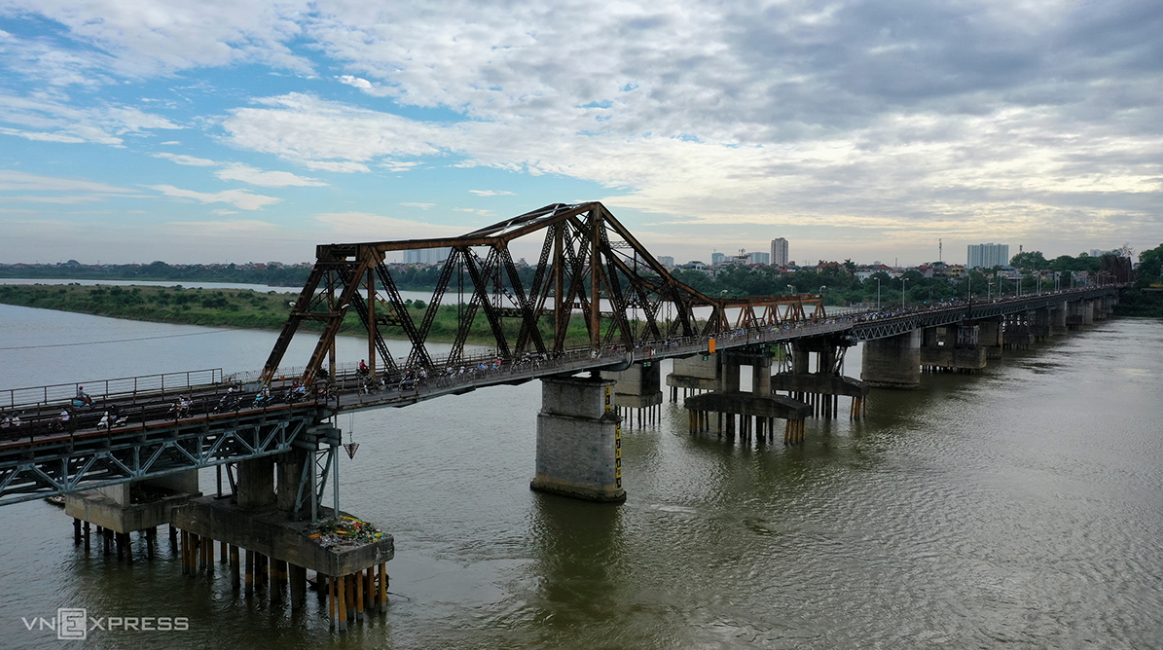 Despite preservation efforts and regular maintenance, Hanoi is losing the iconic French-built Long Bien Bridge that’s been in use for almost 120 years.
April 05, 2021 | 10:47 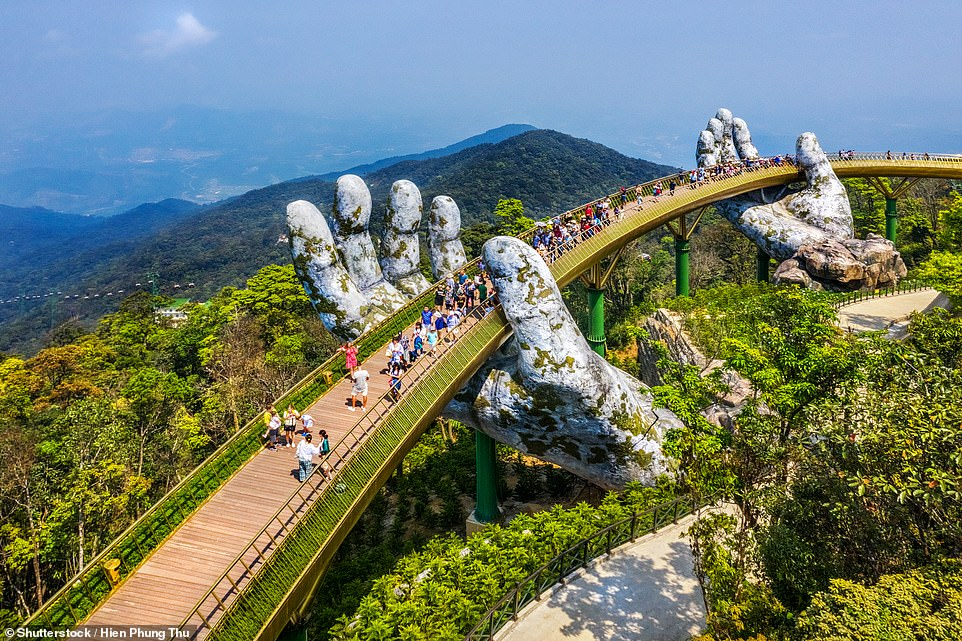 The UK-based newspaper Daily Mail has recently voted the Golden Bridge in Da Nang as a world’s fresh wonder.
March 22, 2021 | 14:00 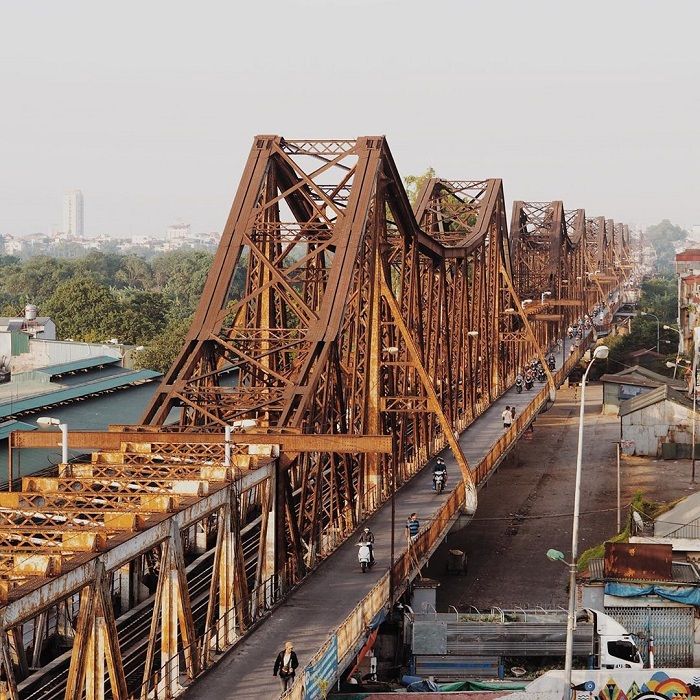 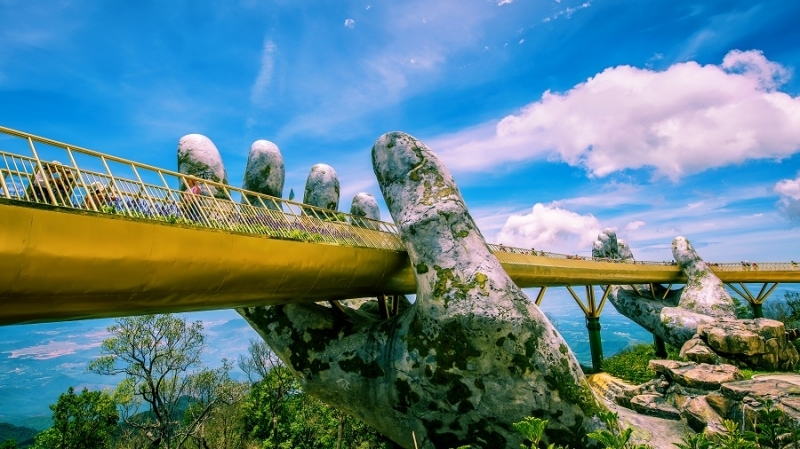 The UK-based newspaper Love Exploring has recently voted the Golden Bridge in Da Nang a world-class work of art, while Ha Long Bay is hailed a perfect stop for sunset watching in the world.
August 22, 2020 | 15:41