One spring morning, Vietnamese American Brian Hester went to a meeting of first generation Vietnamese adoptees in Maryland with no inkling that it would change his life forever.
Jasmine Le
lehang1997hanu@gmail.com October 31, 2021 | 15:20

At that event, Hester, whose Vietnamese name is Cao Hung Phi, met many others adoptees with similar stories of being adopted during the Vietnam War. The gathering was hosted by Holt International, a humanitarian organization based in Oregon, U.S., 21 years ago.

After talking with several other adoptees, Hester was overwhelmed that finally someone truly understood growing up feeling alone and different.

"It was the first time I really understood my circumstance and realized that I wasn’t alone," he told VnExpress International.

In the days following the meeting, Hester remained lost in thought, nursing a desire to learn more about his past.

When he was a kid, Hester was told by his adopted parents, an American couple, that he was adopted from Vietnam. They had found him in an orphanage in Vung Tau, which borders HCMC, in 1973 when he was less than a year old.

Nurses said that Hester's mother had left the hospital after giving birth. The couple, unable to have kids then, was following the advice of their younger brother who’d returned from the war. He said they should raise a child from Vietnam towards mitigating the suffering of disadvantaged children amidst the conflict.

At their home in Ohio, Hester had five siblings who were all adopted. They were close to each other and saw no difference between them, VNE reported.

Outside the home, however, Hester knew that he was different. As a mixed child, Hester was asked about his origin all the time, but no one guessed he was "half Vietnamese". With his distinct appearance, Hester found it difficult to try and explain his origin and often felt a disconnect with people around him.

However, despite his strange experiences, all he knew about his roots was that he "came from a war."

And on that war, he heard several contrasting versions from his uncle and friends' parents. Hester wondered "what the real truth was" and he tried to evade discussions about it.

As he grew up, Hester did not have any Asian friends around and he knew very little about the continent where he was born, except that people used chopsticks there. He learned to use them in a Chinese restaurants that his family went to sometimes after attending church on Sundays.

The meeting organized by Holt International "woke him up." Hester realized that he did not "hate" the war, he did not "blame" it for not knowing his mother and father.

In that meeting, for the first time, Hester felt connected with a group of people. They talked about feelings and problems that they went through since their childhood: being a mixed, adopted baby, unsure about their background and cultural heritage. The family tree was a concept that he had never perceived before.

The meeting had made him more curious about Vietnam and he started researching information and news about the country he was born in. It was only in his late twenties that he tried pho, the famous Vietnamese noodle soup, for the first time. He began having more regular conversations with a Vietnamese American living nearby in Ohio. Their discussions motivated him to "go to Vietnam to check it out."

Hester had no clue about who or what to look for. He had no idea who his birth mother was nor did he know his father’s nationality. All he had were a few photos of himself as a kid, a birth certificate and a Vietnamese passport that was issued before he left Vietnam in 1974.

In 2009, Hester finally visited the southern province of Dong Nai at the invitation of a Viet kieu friend. Everything was new. He was charmed by the endless paddy fields, farmers walking down the street with their buffaloes, and traditional local food that he tried. He was also amazed at the millions of motorbikes in HCMC and its bustling atmosphere.

However, no one seemed to believe that he was half Vietnamese. Some asked, "why don't you speak Vietnamese then?"

When Hester reached Vung Tau, no one believed that he was born there, either.

The orphanage he was adopted from was closed and rebuilt for other purposes. The landlord had passed away a few years earlier. Hester did not know how to find people who may have known him as a baby.

He felt an overwhelming emptiness and it took several days to look at his circumstances in a new light.

Talking to his friends, Hester found that if he had not been taken to the U.S. then, life would have been very difficult. It dawned on him that he was very fortunate to have a family, get educated and live a good life in America. But the link with the land of his birth kept pulling him back.

On his third trip to Vietnam in 2011, one morning, Hester opened his window in HCMC and in a trice, knew that "I want to live here." He loved many things about the country, the close family bonds, a community of people caring about each other and other aspects. He also loved life in the city as well as the countryside.

"It is hard for me to explain, but I was always pulled back here each time I left."

After that moment of epiphany, Hester quickly returned to the U.S. and prepared to move to Vietnam. Everything he had was packed in bags. His parents and siblings said they understood his choice and let him go.

On his "final" return, Hester worked in HCMC as an English teacher and opened a pho restaurant afterwards. He saw no need to dramatize his move, but engaged in small actions, volunteering and teaching English for free to children in difficult circumstances.

"I hoped I could help a kid to have a chance to change his or her life as I did."

Without "sufficient clues," Hester is aware that finding his biological mother will not be easy. In fact, it would be next to impossible. He’s read numerous articles about people making every effort to meet their biological parents.

"It would be a miracle if I can see my mother again. I will thank her for giving birth to me. I guess she must have had a reason for leaving at that time."

Early this year, Hester made another decision to move and live in Vung Tau, the town where he was born.

After 10 years of living in Vietnam, he said he felt confident that he belonged here. While he does not know how to describe "his Vietnamese part", he definitely loves the food and finds the culture unique, caring and loving.

Recently, after experiencing hardship during the Covid-19 outbreaks, Hester opened a Vietnam Car Care franchise in Vung Tau. He feels thankful and "so blessed with my life.

"I can say that I have come full circle... back where I started."

Last year, a Vietnamese French adoptee reportedly finally found his birth mother after 27 years thanks to the power of the Internet and social media.

“It took me by surprise that I couldn’t say a word. Happy, worry, anxious was how I feel. For days, I couldn’t sleep a wink”, Nguyen Van Tan was quoted by Thanh Nien.

Tan moved to the town of Athis-Mons, France with his adoptive parents on December 5, 1993. On that day, he was only 8-day-old. His is childhood was filled with love and care from his adoptive parents, relatives, and friends. But as he grew older, he started to question the difference in his skin color, his eyes, his hair.

Knowing he was actually a Vietnamese-born child, Tan gradually learned about Vietnamese people, nature, and culture.

Since 2018, Tan has traveled to Vietnam 5 times in search of his parents. However, due to language and cultural differences, yet is Tan to find his root, he had the chance to experience his home country more.

In December 2020, two days after his story published on a Vietnamese news outlet and got wide media coverage on social media, Nguyen Van Tan, 27, (French name is Loic Langeard) got a call from Vietnam. It’s his half-sister, Le Thi Ngoc Hoai , 22. In a statement with Thanh Nien, Hoai said she had a hunch that Tan is his long-lost half-brother the minute she saw his picture on the Internet. Hoai and Tan, who was in France that day, exchanged photos, detailed information. There are a lot of things in common between Tan and the woman supposed to be his mother.

“I was so emotional seeing my mom for the first time, though they were just her photos. I had a strong feeling that the blood flowing in my body is hers", Tan said. He added that although it wasn’t genetically certified, he pretty much physically resembled his mother.

From French, Tan video-called his mother in Vietnam. With the help of a virtual interpreter, the two could talk to each other for the first time after decades of separation.

“I had a big scar in my soul. Today, the scar seems to have gone away”, Tan almost cried talking about his reunion with his birth mother after 27 years.

As much as happy he is, Tan is trying to learn Vietnamese so that he could communicate with his mother and other family members in Vietnamese. 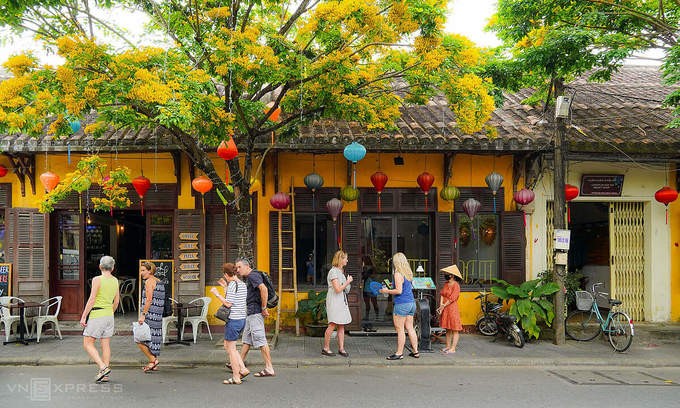 Vietnam Extends Automatic Stay for Stranded Foreigners due to Covid-19

The Department of Immigration has issued a notice on automatic extension of stay for foreigners stranded in Vietnam due to Covid-19
November 09, 2021 | 08:08 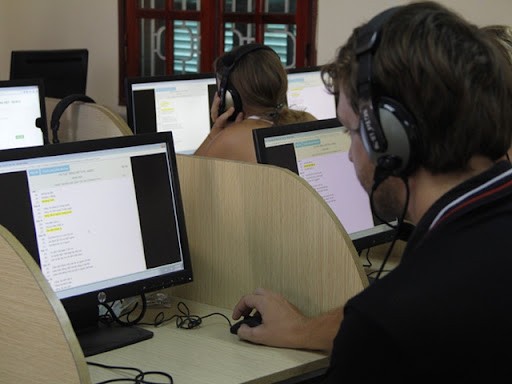 New policy on assessment of Vietnamese language proficiency for foreigners will come into effect in November.
November 02, 2021 | 08:35 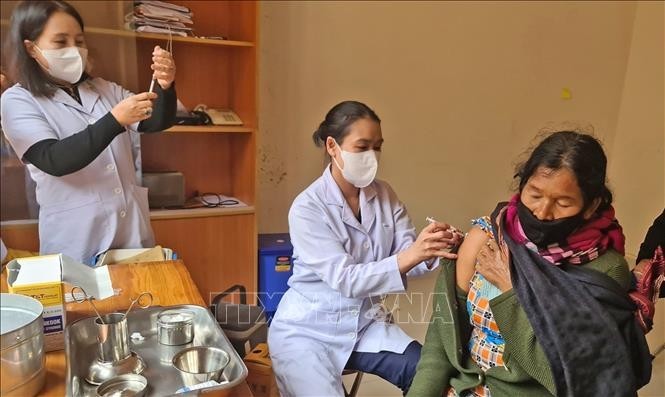 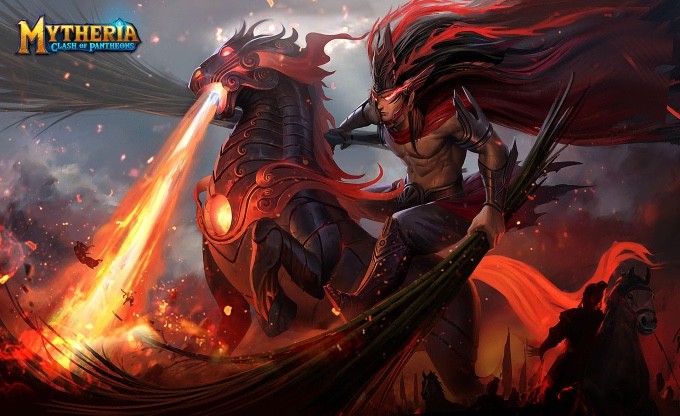 Dozen of beautiful photos from the "Homeland View from the Sea" national photo contest will be featured in a 2022 calendar.
December 04, 2021 | 12:35
Phiên bản di động