Happy Festivus! All you need to know about the holiday, meaningful quotes

It’s almost time for Festivus! Since first being introduced in the Seinfeld episode “The Strike” on December 18, 1997, Festivus has been celebrated every December 23 as a protest against the hustle and bustle of the holiday season.
Malie Nguyen
Dieuhuong270198@gmail.com December 24, 2020 | 07:43

Festivus is a non-religious holiday, started by Daniel O’Keefe in 1966 and popularized by “Seinfeld” in a 1997 episode written by his son, Dan O’Keefe. Celebrated every Dec. 23, it aims to protest the commercialism of Christmas, instead celebrating the season with an undecorated aluminum pole (instead of a tree or Menorah), the “feats of strength” (a wrestling match) and the “airing of grievances” (an opportunity to complain about anything and everything), according to Syracuse.

The Origins of Festivus

Festivus was made popular by the Seinfeld episode "The Strike", written by Seinfeld writer Dan O'Keefe. However, Dan based the Seinfeld story on a "Festivus" holiday that his own father invented back in the 1960s/1970s.

The O'Keefes (The "Real Festivus")

The idea of Festivus originally came to Seinfeld writer Dan O'Keefe from a tradition started by his father Daniel O'Keefe, said

Daniel O'Keefe Sr. originally invented Festivus as a way to have a holiday that was secular and not burdened by the religious and commercialism of the holiday season. According to family folklore, the first Festivus occurred in 1966, on the occasion of the first date of Daniel and his soon to be fiancée Deborah. Throughout the 1970s/80s Daniel O'Keefe continued to make Festivus an annual tradition among the O'Keefe clan. 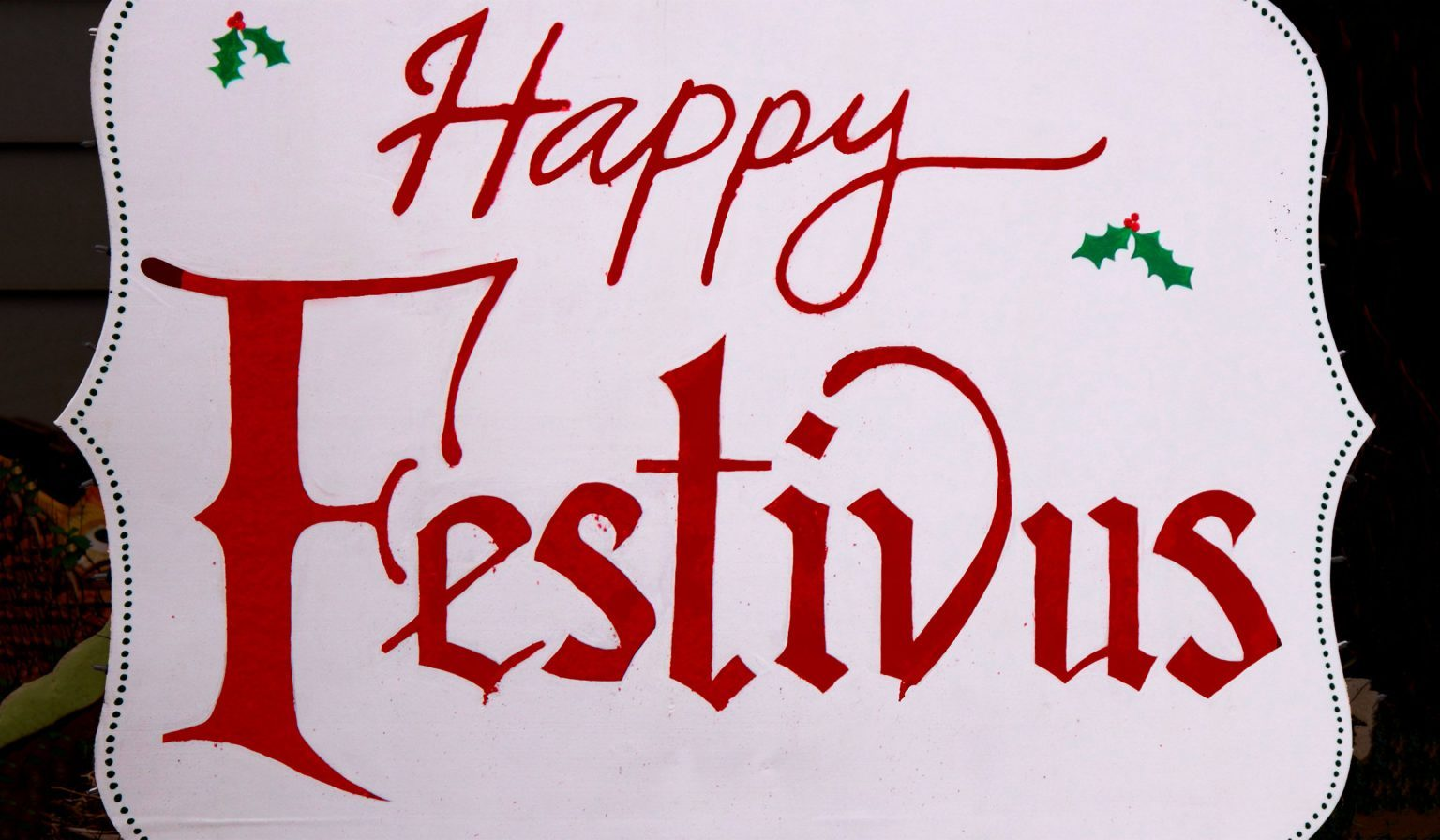 Festivus had no set date. It could occur at any time of the year, and usually never happened at Christmas. Daniel O'Keefe, who was inspired by the Samuel Beckett play Krapp's Last Tape, whose protagonist tapes himself speaking at different times in his life, used a tape recorder to record the proceedings, which included a portion where the family members spoke out about what was bothering them (Like the Airing of Grievances, but not officially named as such). In fact, the O'Keefe family still retains some of the tapes recorded at their own Festivus celebrations in the 1970s.

How did Festivus come to Seinfeld

In 1996, a young Dan O'Keefe became a writer for the hit television program Seinfeld. It is common for writers to draw from their own experiences, however, it never crossed Dan's mind that his father's crazy holiday was worthy for television. It wasn't Dan's idea to include Festivus in the plot of a Seinfeld episode; it was the other Seinfeld writers who convinced Dan to make "Festivus" a sub-plot of an episode.

In a 2013 interview with Mother Jones Magazine, Dan O'Keefe admitted that he was originally not convinced the Festivus storyline was a good idea, and he actually "fought against it". Fortunately, for Festivus aficionados, his fellow writers, and Jerry Seinfeld himself, backed the idea.

The Festivus that most people know of is the version that is depicted in the Seinfeld Season 9 Episode, "The Strike".

In that episode, the origin of the Festivus celebration was the result of one man's refusal to conform to the increased commercialism and consumerism which has saturated the December holiday season. Frank Costanza, during a routine outing to secure a Christmas gift for his son George, realized that there should be a new holiday

The Seinfeld episode, "The Strike", included many other Festivus oddities that were invented by Frank Costanza. The Festivus Pole, for example is a favorite today, but if you read above you will see that the Festivus pole was only part of the Seinfeld version of the holiday, and not an invention of the original O'Keefe version of Festivus.

Skip the hassle of buying a real Christmas tree or assembling a cheap imitation. Opt to set up an aluminum pole, which you can find in a crawl space, a basement, an abandoned lot or other vacant location. The best Festivus Poles are made from aluminum, so as to have a very high strength-to-weight ratio. There’s no need to spend money on breakable ornaments or other superfluous adornment. As Frank explains, “Requires no decoration. I find tinsel distracting”, Parade.com reported.

Everyone is invited to Festivus dinner. The modest meal traditionally consists of sliced meatloaf on a bed of lettuce, with a dish of peas on the side, as George’s mom, Estelle (Estelle Harris) likes to serve. According to festivusweb.com, some people choose to serve food from other episodes of Seinfeld, like Crab Bisque (from the episode with the Soupman).

The Airing of Grievances

Once you’re all comfortably seated at the table, the host welcomes the newcomers and starts the Airing of Grievances. Instead of sharing thoughts of gratitude with those around you, relieve some built-up stress over your annoying relatives and freeloading friends by telling them all the ways they have disappointed you over the past year. Don’t be shy. Take the lead as Frank does and let everyone know, “I got a lot of problems with you people! And now you’re gonna hear about it!”

Festivus miracles are circumstances that have completely reasonable explanations, but are celebrated all the same. Verbal recognition with a sense of awe is given to such occurrences, such as, when someone shows up to the party and is asked how they knew about it, to which they reply that they were invited by a member of the group. At this point, someone should exclaim, “Another Festivus miracle!”

Festivus doesn’t officially end until a guest has pinned the head of the household in a wrestling match called Feats of Strength. The special guest can be selected by the head of the household or nominated by another guest. When Festivus began, audio recordings of the events were made on cassette tapes for future generations to enjoy. Feel free to record a video of the event for an Insta story or live stream the match on Facebook. You may want to remove your ugly Christmas sweater to avoid any damage that may ensue, before wildly calling to your opponent, “Let’s rumble!”