This will be one of the major multilateral foreign relations activities of Vietnam in 2022, especially in the context that the annual meeting of this major global economic forum has been postponed over the past two years due to COVID-19, according to Ambassador Le Thi Tuyet Mai, Permanent Representative of Vietnam to the United Nations, the World Trade Organisation (WTO) and other international organisations in Geneva.

She said that since Vietnam and the WEF set up their relationship in 1989, leaders of both sides have paid great attention to the promotion of bilateral ties in many fields.

The first WEF's Country Strategic Dialogue on Vietnam was held on October 29, 2021 in the in-person format, which was evaluated by the WEF as the most successful dialogue that it had held in coordination with a country in all aspects, said the diplomat.

She stressed that the WEF annual meeting in 2022 is taking place at an important time when the world is facing many challenges. With the participation of nearly 2,500 state leaders, representatives from international organisations, businesses, international non-governmental organizations (NGOs) and scholars, the event aims to seek solutions to the challenges of the world, cited VNA.

Urgent issues to be discussed include global pandemics, the armed conflict in Ukraine as well as geo-economic shocks and climate change. The central theme as well as the solutions to be discussed and proposed at the meeting reflect the common concerns and aspirations of mankind towards prosperity, stability and development after two years of COVID-19 pandemic that has affected the whole world, as well as in the context of increasing geopolitical tensions today, she said.

The diplomat said that the meeting will mark a new era of global responsibility and cooperation, aiming to formulate strategies and seek solutions to the world's greatest problems as well as to advance long-term economic, environmental and social priorities, towards reinforcing the foundation of a stable global system in an increasingly complicated multipolar world.

For Vietnam, the event will be a chance for the country to introduce its socio-economic development strategy in the new period, policies on reopening tourism, promoting trade, investment and inclusive economic recovery towards the transformation to a green growth model, digitisation and sustainability, as well as Vietnam's strong commitments to upholding and promoting multilateral cooperation and realising sustainable development goals.

The diplomat cited Professor Klaus Schwab as saying that Vietnam’s participation in the 2022 WEF meeting along with leaders of other countries and international organisations and global corporations, provides an opportunity for the country to promote its role as an active partner of the international community and contribute to efforts to orient ideas and strategic policy mindset for the current turning-point period.

The nation remained top of the leader board at the ongoing 31st Southeast Asian Games (SEA Games 31), earning an additional 10 gold medals on May 21 to surpass its initial target of winning between 140 and 150 gold medals at the event.

Fighter Le Hong Tuan earned gold in the men’s 55kg category in Vovinam competitions on May 21 after defeating rivals from Laos, Cambodia, and Thailand.

In other events held on the same day, the Vietnamese women’s handball team trounced Thailand 39-27 and claimed another gold medal for the nation.

Pham Thi Hong Thanh bagged a gold medal in the women’s 64kg category, while setting two new SEA Games records in the process with 126kg in the jerk event and 230kg in the total lift.

Elsewhere, weightlifter Nguyen Quoc Toan obtained a bronze medal in the men’s 81kg category after recording a total lift of 340kg, with the gold and a silver medals going to the weightlifters of Thailand and Indonesia.

Furthermore, canoists brought home to two gold medals for Vietnam on May 21, with Nguyen Thi Huong grabbing a gold medal in the women’s 200 metres after clocking a time of 49 seconds. This marks Huong’s third medal at SEA Games 31 after coming first in the 500 metres and 1,000 metres, according to VOV.

In the men’s team blitz chess event held on the morning of May 21, Le Quang Liem and Le Tuan Minh trounced their rivals from Indonesia, Thailand, the Philippines, Malaysia, and Myanmar in five matches to win a gold medal for Vietnam.

The Singaporean top legislator was quoted by Strait Times as speaking at a media doorstop in Hanoi on May 20 that it is really difficult to organise a major Games and amidst Covid-19, it makes it even more complicated, (there are) so many moving parts.

"To be able to do what they've done really is first class. Talking to our athletes and officials, they have felt nothing but warmth, friendship and hospitality,” said Tan, who is also President of the Singapore National Olympic Council (SNOC).

"I'm very grateful to Vietnam for hosting this and providing this blessing to all of us,” he stated.

He also called on Singaporeans to throw their full support behind the Republic's athletes taking part in the ongoing SEA Games and at international competitions beyond, reported VNA.

When asked for his take on Team Singapore's performance at the May 12-23 SEA Games, he stressed the need for the athletes, who have yielded 47 gold medals so far, to get the backing they need from their countrymen.

"We are all a part of the broader Team Singapore, and it's really important for us to back (national athletes) and cheer them on," he said.

SEA Games 31 is taking place in Hanoi and 11 nearby localities until May 23. This is the second time Vietnam has hosted the Games, after the first in 2003.

A delegation from the Supreme People's Court of Vietnam led by Deputy Chief Justice Nguyen Van Du paid an official visit to Cuba from May 18 to May 21 to promote bilateral professional relations and attend the 10th International Conference on Justice and Law of Cuba.

During a meeting held with Chief Justice of the Supreme People's Court of Cuba Rubén Remigio Ferro, Deputy Chief Justice Du reviewed bilateral co-operation in both nations' court sector and other major activities of the Vietnamese court system in recent years. This includes reviewing the increase in the publicity of judgments, improving the quality of judicial services for the people, and modernizing facilities.

In response, Chief Justice Rubén Remigio Ferro touched upon orientations aimed at modernizing the Cuban court system, especially in the field of digitalisation, and pointed out a number of coincidences in the process of revamping the two countries' judicial systems.

Showing a keen interest in the experience of judicial mediation in Vietnam, Comrade Rubén Remigio Ferro suggested enhancing professional exchanges or organising seminars as a way of better exploiting the similarities between the two countries, cited VOV.

As part of this occasion, Deputy Chief Justice Du presented a symbolic gift of laptops from the Supreme People's Court of Vietnam to Cuban partners.

The International Conference on Justice and Law of Cuba is viewed as a venue for scientific exchanges of outstanding judicial topics, with the participation of many prestigious scholars, judges, jurists, and researchers both in Cuba and globally.

During the course of their visit to Cuba, the delegation of the Supreme People's Court of Vietnam attended the flower offering ceremony to celebrate the 132nd birthday of President Ho Chi Minh (May 19, 1890 - May 19, 2022) at Peace Park located in Havana.

The ‘Vietnam Day’ program was held by Moscow State Linguistic University for the first time on May 20, offering international friends the opportunity to gain a better understanding of Vietnam’s culture, land and people.

The event also aimed to celebrate the 10th anniversary of the signing of the Comprehensive Strategic Partnership Agreement between Russia and Vietnam and the 132nd birth anniversary of President Ho Chi Minh.

Rector of Moscow State Linguistic University Irina Kraeva shared that the university has been trainingVietnamese students since the 1960s, with 300 Vietnamese students having graduated, many of whom have held positions in the government, diplomatic agencies, and become business owners in Vietnam.

The university has also started teaching Vietnamese to Russian students since 2017. Kraeva also noted that ‘Vietnam Day’ will become an annual event at the university, NDO reported.

Head of the Economic-Scientific-Education Department of the Vietnamese Embassy in the Russian Federation Le Thi Huyen Minh appreciated the initiative of organising ‘Vietnam Day’, stating that this event not only promotes cooperation between the two countries in the field of education and training but also boosts Vietnamese language and Vietnamese culture in Russia.

At the event, Vietnamese students performed dances and songs praising the country and people of Vietnam. The most outstanding performance was the play My Chau-Trong Thuy, which was directed and performed inVietnamese by Russian students. 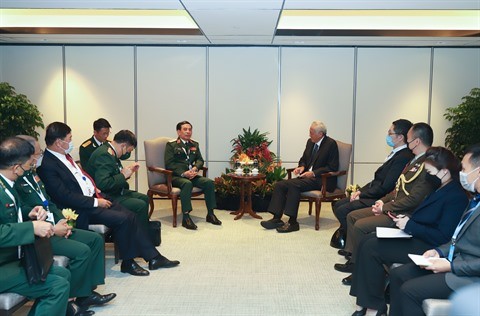