An event titled “Vietnam in Germany” is taking place within the framework of the AFA Augsburg spring fair 2020 in Augsburg city of Germany’s Bavaria state from January 24-28. 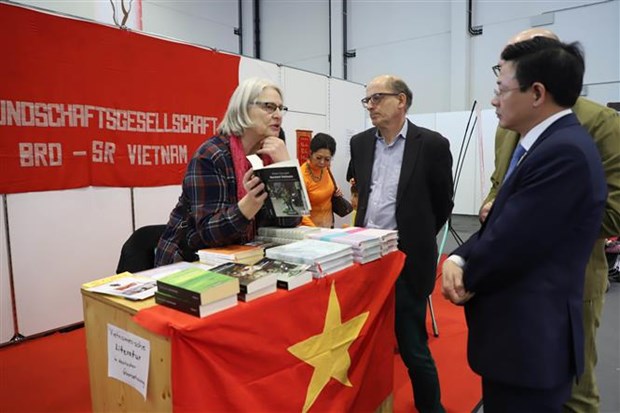 Vietnamese literature works are introduced at the event (Photos: VNA)

The event, part of activities to mark the 45th founding anniversary of the Vietnam-Germany diplomatic ties (1975-2020), is organised by Huong Viet magazine, which is among the best providers of online news in Vietnamese in Germany, in collaboration with the city’s exhibition centre.

Products and traditional cuisine of Vietnam are on display at the five-day fair, notably Vietnam’s famous literature works translated into German. Besides, the tens of photos on Vietnamese landscape and people taken by photographers of the two countries are also introduced at the event.

Editor-in-chief of Huong Viet Pham Khanh Nam said the event aims to promote Vietnam’s landscape, people, culture and cuisine to German and international friends, as well as strengthen the links among Vietnamese people in Augsburg and the surrounding areas.

Vietnamese Defence Attache to Germany Nguyen Tuan Minh said as Vietnam and Germany signed a strategic action plan for 2019-2021, the bilateral strategic partnership will continue to thrive this year.

Reiner Erben, a member of the Augsburg city council, said the event has helped local people better understand the countries’ culture. The Vietnamese community in Augsburg plays a significant role in the local development, he added./.