The remain of thousand-year-old mask that was believed to belong to a China's lost civilization, found at an archaeological site in China's Sichuan province.
Chau Polly
March 24, 2021 | 14:13

Weighing about 280 grams (0.6 pounds) and estimated to be made from 84% gold, the ceremonial mask is one of over 500 items unearthed from six newly discovered "sacrificial pits," according to the country's National Cultural Heritage Administration.

The finds were made at Sanxingdui, a 4.6-square-mile area outside the provincial capital of Chengdu. Some experts say the items may shine further light on the ancient Shu state, a kingdom that ruled in the western Sichuan basin until it was conquered in 316 BC, according to CNN Edition.

In addition to the gold mask, archaeologists uncovered bronzes, gold foils and artifacts made from ivory, jade and bone. The six pits, of which the largest has a footprint of 19 square meters (205 square feet), also yielded an as-yet-unopened wooden box and a bronze vessel with owl-shaped patterning.

More than 50,000 ancient artifacts have been found at Sanxingdui since the 1920s, when a local farmer accidentally came upon a number of relics at the site. A major breakthrough occurred in 1986, with the discovery of two ceremonial pits containing over 1,000 items, including elaborate and well-preserved bronze masks.

After a long hiatus in excavations, a third pit was then found in late 2019, leading to the discovery of a further five last year. Experts believe the pits were used for sacrificial purposes, explaining why many of the items contained were ritually burned as they were dropped in and buried.

During the summer of 1986, construction workers accidentally uncovered an astounding cache of ancient jades, bone, pottery, elephant tusks, and monumental bronzes at Sanxingdui, about 40 kilometers outside of the Sichuan Province capitol of Chengdu. This chance discovery of two “sacrificial pits” would be one of the most important archaeological finds of the 20th century and force scholars to rewrite early Chinese history. The objects were dated to about 1800 BC, a time when it was thought that the cradle of Chinese civilization was 1200 kilometers to the northeast on the Yellow River in China’s central plain region.

However, the cast bronzes of Sanxingdui were far larger and much stranger in appearance than anything seen before. The Sanxingdui culture left no written record or human remains and appears to have existed for only about 500 years before it vanished. In 2001, another archaeological discovery, this time in the city of Chengdu at Jinsha, revealed possible clues to the mystery of where they might have gone. This exhibition will present many of the most important discoveries from both Sanxingdui and Jinsha and examine the great mystery of where this 3500 year old culture could have come from and where and why they abruptly vanished, according to Archaeology.

Much of what is known about Sanxingdui civilization comes from two pits dating to around the time of its disappearance. The pits contained hundreds of jade, bronze, and ivory objects that had been ritually broken or burned and then buried, and their discovery in 1986 shook up the world of Chinese archaeology.

Although some jade and stone artifacts had been found in the area in 1929, experts had thought that sophisticated Chinese civilization at the time was centered along the Yellow River in the distant Central Plains region. But the pits, which yielded expertly worked bronze items, including several giant masks with strangely distorted features, made clear that the Sanxingdui civilization was quite advanced as well. In 2001, the Jinsha site, discovered within the modern-day provincial capital of Chengdu, was found to contain bronze items that share a similar artistic vocabulary.

Niannian Fan, a scientist specializing in rivers at Sichuan University in Chengdu, says his interest in the Sanxingdui-Jinsha puzzle was first piqued when he noticed that the ravines and beds holding a number of waterways leading to and passing the Sanxingdui site were much wider than their current rate of flow would suggest. It seems they had once held much larger rivers. After the devastating 2008 Sichuan earthquake, Fan hypothesized that another massive earthquake had struck the same area more than 3,000 years ago, causing a landslide high in the mountains that changed the course of the Minjiang River.

“The earthquake would not have destroyed Sanxingdui directly,” says Fan. “But the water level in Sanxingdui would have decreased sharply just one or two days after the earthquake.”

Fan has gathered preliminary evidence to back up his hypothesis. Using Google Earth, he found that a stretch of mountainous terrain through which the old river would have flowed on its way to Sanxingdui lacks signs of glacial erosion that should be present, suggesting that this section may have been covered up by a landslide. In addition, he notes, an ancient text records that an earthquake occurred in 1099 B.C. in the capital of the Zhou Dynasty in Shaanxi Province. This is around 300 miles from what he presumes to have been the quake’s epicenter, but its magnitude would have ensured it was felt there. (Neither the Sanxingdui nor the Jinsha civilization left any written records.) 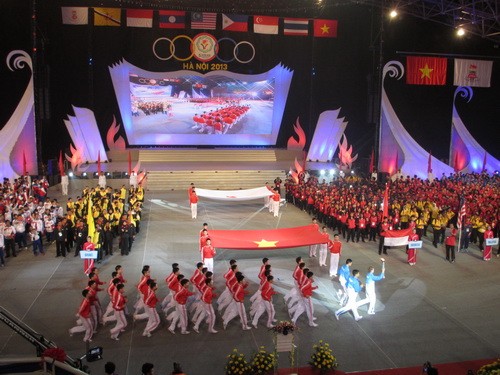