A seal and a double stamp impression dated to the Persian period, about 2,500 years ago, were discovered in ancient Jerusalem, announced the Israel Antiquities Authority (IAA) recently.
Tony Nguyen
[email protected] July 16, 2020 | 10:25

The findings were discovered by the IAA and Tel Aviv University next to the rubble of a large structure that was destroyed during the Babylonian destruction of the city.

According to Xinhua News, the double seal impression was discovered on a large piece of a 4.5-centimeter-long clay, indicating that it was used to seal a large container, perhaps a jar, and not a document.

The imprint bears a Babylonian-style image of a person, probably a king, sitting on a large chair with two columns in front of him, representing the gods Nabu and Marduk.

The seal is made of a large, locally made pottery shard, with a circular frame engraved on its outer side, and is divided into two sections containing several linear inscriptions, probably representing two characters.

On the other side of the seal is a fragment, which may be indicative of a handle that was attached to it in the past. The size of the seal, about 8-centimeter in diameter, indicates that it was used to seal large objects.

“The finding of the stamp and seal impression in the City of David indicates that despite the city’s dire situation after the [Babylonian] destruction, efforts were made to restore the administrative authorities to normal, and its residents continued to partly use the structures that were destroyed”, cited Times of Jerusalem with the archaeologists' comments.

According to the researchers, the artifacts most likely date back to the Persian period, about 2,500 years ago, and offer groundbreaking archaeological evidence that even after the terrible destruction it underwent in 586 BCE at the hands of the Babylonians, Jerusalem maintained the rank of an important administrative center.

“We discovered the objects a few months ago in a palace that was probably built around the end of the 8th century,” TAU Prof. Yuval Gadot told The Jerusalem Post. “While we cannot be sure about when the structure was first erected, we do know that it was destroyed in 586 and then rebuilt and reused.”

Other artifacts were discovered along with the two items, including a broken pottery vessel decorated with a face of the Egyptian god Bes

“The Persian period is a black hole in archaeology,” Israel Antiquities Authority’s Dr. Yiftah Shalev told The Times of Israel on Tuesday. “Every time we find something, it’s like lighting a new candle — it gives a new light”. 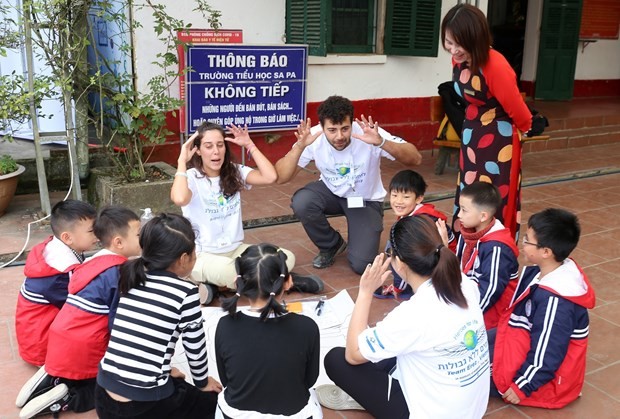 22 volunteers from Israel’s "Heroes for Life", coordinated with 20 students of Thai Nguyen University to organise interactive English classes for children at Sa Pa Town from October 24 to November 3.
October 25, 2022 | 06:17