To celebrate International Women's Day (March 8), Google Doodles takes us in a journey in celebrating a series of firsts in women’s history. Respecting the trailblazers of past, present and future, Google’s doodle highlights female pioneers who challenged the status quo in their times and made ready in education, social rights, science, art and significantly more.
Chau Polly
March 08, 2021 | 15:51

Google is celebrating the annual holiday with an animated Doodle that highlights women's "firsts" in history. The Doodle focuses on the hands that opened the doors for women today, including those of the first women to cast a vote and other activists. Other hands in today's spotlight include those of pioneering female scientists, writers, athletes and artists from around the world.

This year's famous animation starts with a blue background portraying the sky and all you can see are hands in the air. Some hands are holding each other while some are just in the air. Google is written in white in a cursive format and one of the pairs of the holding hands make for the first O of Google. And the play button makes for the second O. If you hover your mouse over the doodle, the words International Women's Day 2021 pops up.

However, things get interesting once you play the video. Peppy music begins in the background and an animated montage is shown of various women who have changed the course of history by achieving things that were not possible for women before them. It also showed the areas of life where women were thriving and making a name for themselves. Interestingly, these were similar to areas where men have been thriving for decades. This doodle honoured the trailblazers of the past, present and future.

While explaining about the doodle, which has been illustrated by Helene Leroux, Google wrote, "From the first woman astronaut to the first woman to climb Mount Everest, in the past year, the world searched for 'the first woman' more than ever before. See how Google is celebrating the women who have achieved historical firsts, as well as the many who have come after them."

They also wrote, "Today’s annual International Women’s Day Doodle takes a journey through a series of firsts in women’s history—highlighting female pioneers who have challenged the status quo and paved the way in education, civil rights, science, art, and so much more. (sic)."

The explanation further read, "The video Doodle pays homage to these (s)heroes by depicting the hands that have opened the doors for generations of women. While some firsts achieve something spectacularly new, others are receiving a recognition or right that is long overdue. (sic)."

"Suffragists, academics, gold medalists, entrepreneurs and more—today’s Doodle celebrates the women around the world who overcame the obstacles of their time to create a lasting legacy. These firsts stand on the shoulders of countless others—women who laid the foundation, in the past, for today’s doors to be finally opened and glass ceilings broken. In honor of the trailblazers of the past, present, and future—Happy International Women’s Day," they wished everyone across the globe.

International Women's Day, also known as IWD for short, grew out of the labour movement to become a recognised annual event by the United Nations (UN).

The seeds of it were planted in 1908, when 15,000 women marched through New York City demanding shorter working hours, better pay and the right to vote. It was the Socialist Party of America who declared the first National Woman's Day, a year later.

The idea to make the day international came from a woman called Clara Zetkin. She suggested the idea in 1910 at an International Conference of Working Women in Copenhagen. There were 100 women there, from 17 countries, and they agreed on her suggestion unanimously, according to BBC.

It was first celebrated in 1911, in Austria, Denmark, Germany and Switzerland. The centenary was celebrated in 2011, so this year we're technically celebrating the 110th International Women's Day.

Things were made official in 1975 when the United Nations started celebrating the day. The first theme adopted by the UN (in 1996) was "Celebrating the past, Planning for the Future".

International Women's Day has become a date to celebrate how far women have come in society, in politics and in economics, while the political roots of the day mean strikes and protests are organised to raise awareness of continued inequality.

It's on 8 March. Clara's idea for an International Women's Day had no fixed date.

It wasn't formalised until a war-time strike in 1917 when Russian women demanded "bread and peace" - and four days into the women's strike the Tsar was forced to abdicate and the provisional government granted women the right to vote.

The date when the women's strike commenced on the Julian calendar, which was then in use in Russia, was Sunday 23 February. This day in the Gregorian calendar was 8 March - and that's when it's celebrated today.

Purple, green and white are the colours of IWD according to the International Women's Day website.

"Purple signifies justice and dignity. Green symbolizes hope. White represents purity, albeit a controversial concept. The colours originated from the Women's Social and Political Union (WSPU) in the UK in 1908," they say.

International Women's Day is a national holiday in many countries, including Russia where the sales of flowers doubles during the three or four days around 8 March.

In China, many women are given a half-day off work on 8 March, as advised by the State Council, although many employers don't always pass the half-day on to their female employees.

In Italy, International Women's Day, or la Festa della Donna, is celebrated by the giving of mimosa blossom. The origin of this tradition is unclear but it is believed to have started in Rome after World War Two.

In the US, the month of March is Women's History Month. A presidential proclamation issued every year honours the achievements of American women.

This year will look a little different because of coronavirus and more virtual events are expected to take place around the world, including this one from the UN. 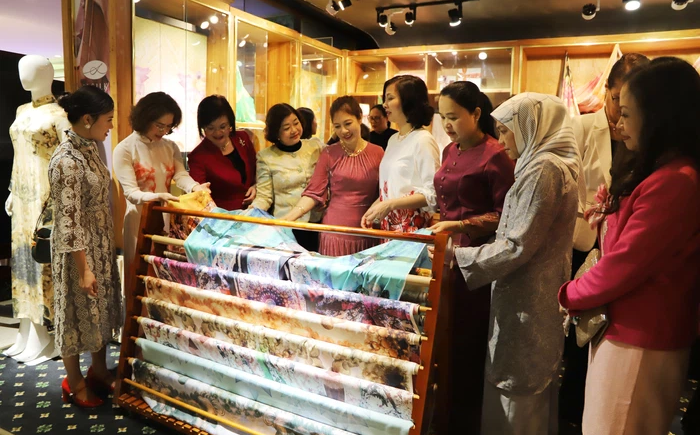 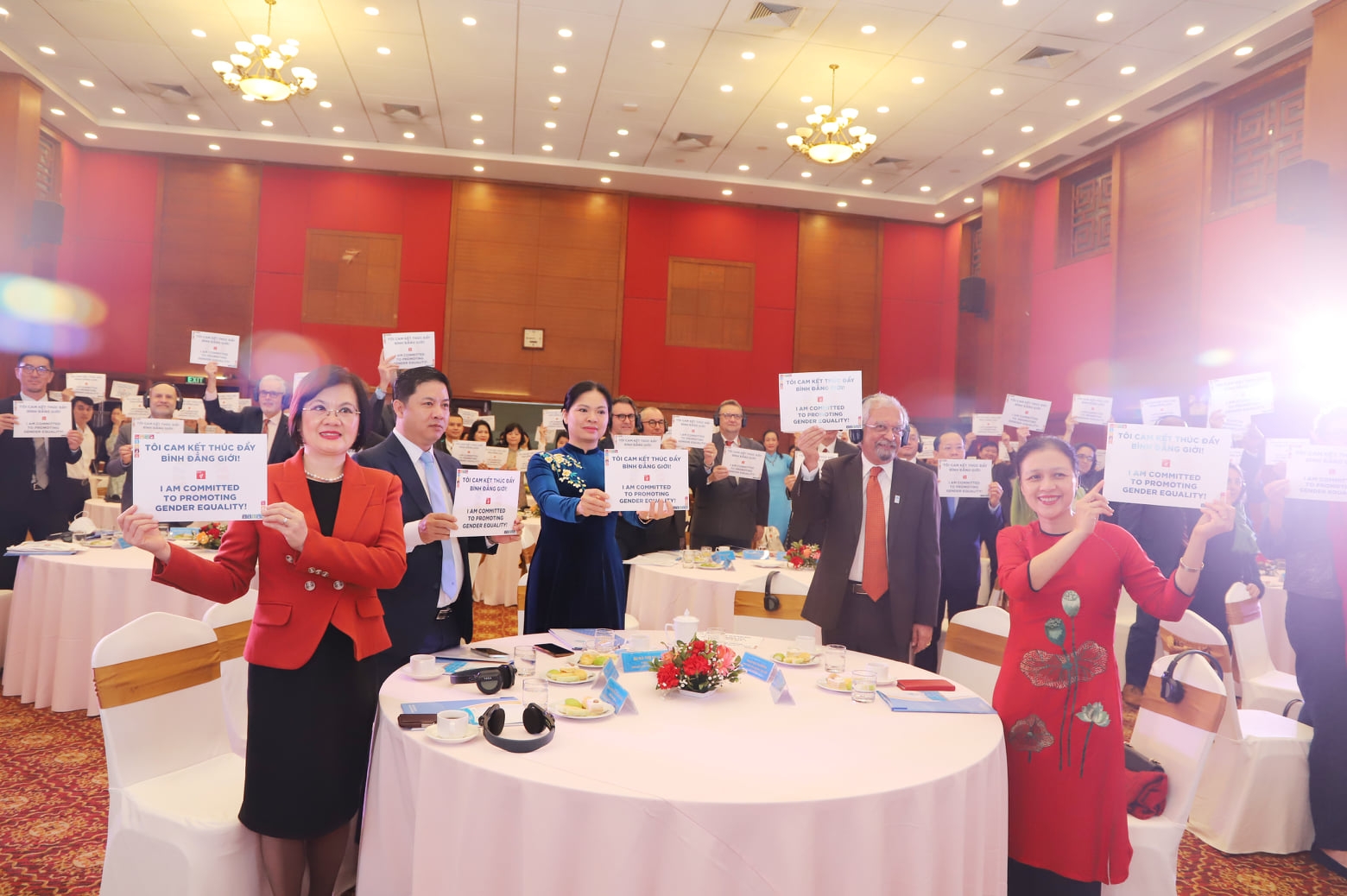 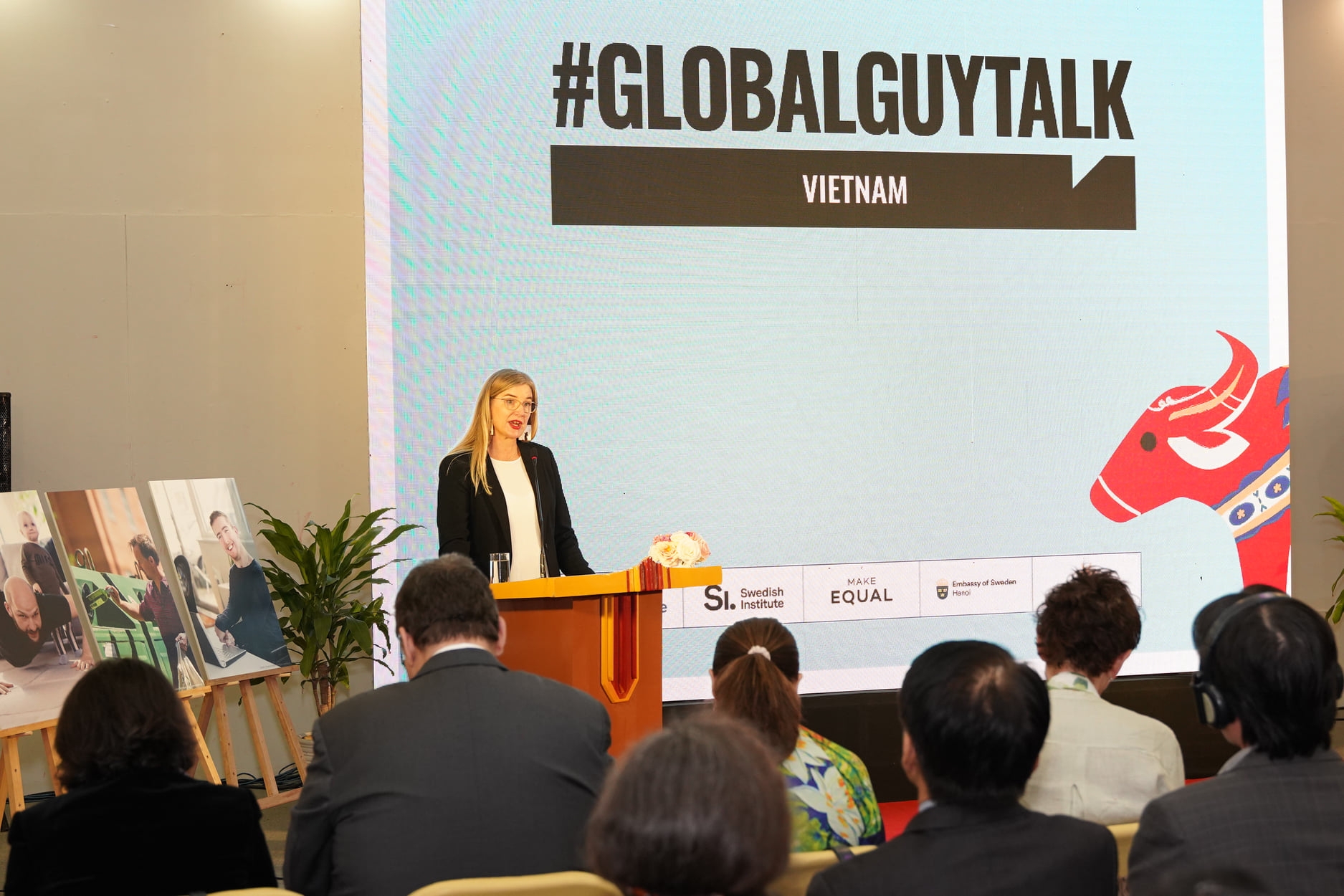 In cooperation with the Swedish Institute, Make Equal, the Vietnam Women's Union, the Vietnam Women's Museum and Ministry of Labour, Invalids and Social Affairs, the Embassy of Sweden in Hanoi launched Globalguytalk in Vietnam on the occasion of International Women's Day 2021.
March 10, 2021 | 16:27