Hoi An to celebrate Lunar New Year with various activities

Popular Japanese singer Ueno Yuuka, who was appointed Goodwill Ambassador for the Hoi An-Japan Cultural Exchange, will perform with singer Kawamura Yui and the Kolme band from Japan on Lunar New Year’s eve at the Sculpture Park in the ancient city on January 24. 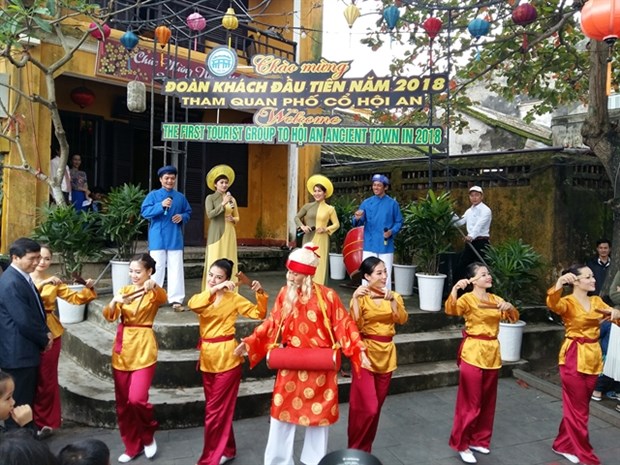 A folk performance is staged on the Hoai River bank in Hoi An. The ancient city will host a series of programmes in celebration of the Lunar New Year from January 21 to February 9 (Photo: VNA)

The city said the performance will begin at 10.30pm and be followed by a firework display.

The show is part of events to celebrate the New Year in the UNESCO world heritage site.

Local craft demonstrations, folk performances, a photo exhibition and a boat race will be organised in the evening on the Hoai River bank from January 24-29.

A glutinous cake making competition will be held among communes and villages in suburban of Hoi An from January 21-24.

Craft villages in Hoi An will host festivals to honour their traditional products, including tree planting at Tra Que vegetable village; Kim Bong carpentry village; and a maize festival in Cam Nam village from January 29 to February 9./.

Cham Island's Irresistible Beauty Through The Lens Of A Greek Traveller

Captivating Hoi An under the lens of a foreign photographer