Widespread rainfall with thunderstorms, lightning and gusty winds are expected to hit over Andaman & Nicobar Islands during the next four days.
Ruby Lee
[email protected] March 31, 2021 | 17:00

According to Skymet Weather, a low-pressure area is over the south-east Arabian Sea and the adjoining Equatorial Indian Ocean. An associated cyclonic circulation is up to mid-tropospheric levels.

A cyclonic circulation is over the south-east Bay of Bengal. It will induce a low pressure over the same area in the next 24 hours, which will further intensify into a well-marked low in the subsequent 24 hours.

During the next 24 hours, light to moderate rain with isolated light snowfall may continue over Western Himalayas until tonight. The weather will clear up by tomorrow. Light to moderate rain and thundershower with isolated heavy to very heavy spell may occur over northeast India. Landslide and inundation in low-lying areas are also possible in some parts. Moderate to heavy rain and thundershowers are possible over Andaman and Nicobar Islands for the next 3 to 4 days.

Events will be moderate to strong over the south-east Bay of Bengal near Andaman and Nicobar Islands. Fishermen are advised not to venture into the sea for at least the next 2-3 days. Light rain with one or two moderate spells may occur over Kerala.

Strong surface winds from the Northwest direction are expected to continue over Indo Gangetic Plains during the next 2 to 3 days. Wind speed maybe around 30 to 40 kmph.

Parts of Northeast India will continue experiencing the rain spell that began drenching the region at the start of this week, with heavy showers particularly likely over the states in the next 24-48 hours.

According to the India Meteorological Department (IMD), the strong lower-level south-westerly winds blowing in from the Bay of Bengal, coupled with other favourable meteorological conditions, will cause rainfall, thunderstorms, hailstorms, thundersquall and lightning over the Northeast for the next two days, i.e. March 31 and April 1.

Fairly widespread to widespread showers, thunderstorms, hailstorms, thundersquall and lightning are all expected at isolated places across Northeast India on Wednesday and Thursday, although maximum rainfall activity is expected on Wednesday itself.

Assam, Meghalaya, Nagaland, Manipur, Mizoram and Tripura will all witness isolated heavy falls on Wednesday, whereas Arunachal Pradesh and Sikkim will be in for heavy downpour on Wednesday as well as Thursday.

As per The Weather Channel’s met team, a 3-day total precipitation of 50 mm to 120 mm is possible over Arunachal Pradesh and adjoining areas from Wednesday to Friday.

According to Hindustan Times, dry, dust laden winds from Rajasthan have started blowing over Delhi leading to a deterioration in air quality and visibility in the Capital.

Scientists from the India Meteorological Department said the air quality is likely to deteriorate further as strong, westerly winds is likely to blow over the city till April 1.

“The change in the colour of the sky is mainly due to dust. There is loose soil floating around and strong winds is raising this soil and dust particles. Westerly winds, which is blowing at about 40kmph, is also bringing dust from Rajasthan. These conditions will continue till April 1, following which temperature will rise further,” said Kuldeep Shrivastava, head, regional weather forecasting centre.

The relative humidity was only 16% to 17% on Tuesday afternoon.

“Our models are showing that these strong winds will prevail for 2-3 days. There is no moisture incursion over the region. Winds are blowing from dry regions to the west and northwest. Heat wave conditions were recorded over parts of Uttar Pradesh, Rajasthan, Gujarat, Madhya Pradesh and Delhi on Monday because of clear skies, uninterrupted solar radiation and low wind speed. But the strong winds will help keep the maximum temperature in check for now. Maximum temperatures will shoot up again from April 2 or April 3,” said K Sathi Devi, head, national weather forecasting centre.

According to Weather.com, under the influence of the cyclonic circulation over Southeast Bay of Bengal and adjoining south Andaman Sea, a low pressure area has formed over the same region. The associated cyclonic circulation extends up to 5.8 km above mean sea level, and is likely to become more marked over North Andaman Sea and neighbourhood during the next 24 hours, as per the India Meteorological Department (IMD).

This system will cause widespread rainfall with thunderstorms, lightning and gusty winds over Andaman & Nicobar Islands during the next four days. Isolated heavy to very heavy falls are also on the cards over the Islands during March 31-April 1. Fishermen are also advised not to venture into Southeast Bay of Bengal and adjoining South Andaman Sea on March 31, and over the Andaman Sea and adjoining areas of Bay of Bengal on April 1-2.

Meanwhile, strong lower level south-westerlies from the Bay of Bengal and other favourable meteorological conditions are set to bring fairly widespread to widespread rainfall with thunderstorms, hailstorms, thundersquall and lightning at isolated places of Northeast India on March 31-April 1, with maximum activity on March 31.

Accordingly, isolated heavy falls are expected over Assam, Meghalaya, Nagaland, Manipur, Mizoram and Tripura on March 31, and over Arunachal Pradesh during March 31-April 1. These conditions may also cause landslides and inundation of low lying areas at isolated places over south Assam, Meghalaya, Tripura and Mizoram during March 31-April 1. 3-day total precipitation of 50 mm to 120 mm is possible over Arunachal Pradesh and adjoining areas from Wednesday to Friday.

A trough and cyclonic circulation also persist over Southern India, which will bring isolated to scattered rain with lightning over Kerala in this period.

Lastly, a fresh western disturbance could affect the Western Himalayan Region from Sunday onwards. Dry weather is likely over Central, Western and Eastern India in this period, and over Northern India from Wednesday to Saturday.

Isolated rain with lightning is possible over Kerala. Heatwave conditions have been predicted in isolated pockets over Maharashtra, Odisha and Telangana. 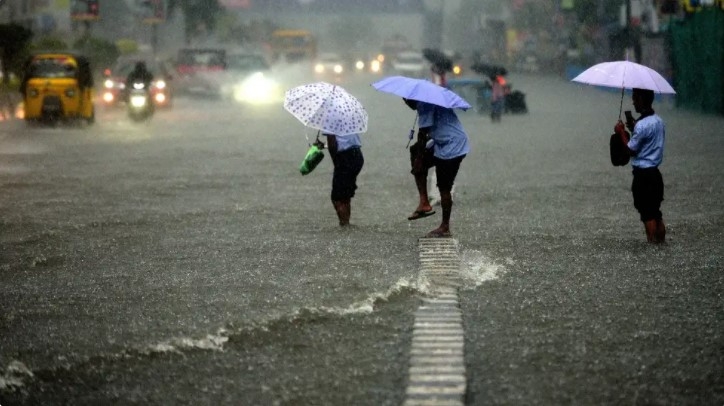