Kon Tum and Gia Lai: Perfect destinations for a spring tour in Vietnam

Spring is a wonderful time for a tour to Gia Lai and Kon Tum, where the tourists can enjoy the fresh breeze, explore the local cultures, and appreciate the beauty of nature.
Chau Polly
March 15, 2021 | 08:10

The Great Lake or Ho T'nung Lake (another way of writing is Tơ Nuêng Lake, Tơ Nưng Lake) is a freshwater lake located northwest of Pleiku city, Gia Lai province, about 7 km from the city center along Highway 14, located on a flat topography plateau about 800 meters above sea level. This is an important freshwater lake for this city.

According to scientists, the T'Nung lake is a crater that has been inactive for million years. The lake has an oval shape with an average depth of about 12 to 19m. People call it the Great Lake because of the large area of ​​the lake, up to 228 hectares of gardens and mountains, in the rainy season, the water surface can spread over 400 hectares. T'Nung Lake is one of the most beautiful lakes in the Central Highlands. Local people called T'Nung, meaning "sea on the mountain".

Lake T'Nung is the refuge of birds such as kingfisher, black coot, cuckoo bird, sometimes have lotus and water lily clusters in the water surface; le le bird (local name), geese often dive in reeds, and in the sky.

On November 16, 1988, this place has been granted by the Ministry of Culture and Information with a certificated of National heritage.

T'Nung Lake, also known as Bien Ho Lake, meaning "Eyes of Pleiku", is considered a treasure given to the Gia Lai mountain city with its large lake area, fresh air and surrounding green pines. But only local people know that Bien Ho Lake is still divided into two parts, separated by a small suspension bridge, with one side called "Bien Ho Lake" (T’Nung Lake), the other side is tea fields located around a hundred-year-old road, called Bien Ho Tea.

The entrance to tea hills passes through two rows of ancient pine trees that are over 100 years old. Gia Lai youth call this the "Korean road" because of its romantic beauty.

In the early years of the 20th century, the French began to appear in Pleiku to exploit the northern land of the province, they built the first tea plantations of Gia Lai Province, the precursor of Bien Ho Tea now. The tea hills are considered as a green lung to regulate the air for the whole region, attracting a lot of tourists, as well as famous photographers, and becoming the famous checking-in place of Gia Lai's youth.

Travelling on Lake T'nung by a unique wooden boat, watching the scene while listening to the people here tell stories of the legendary land, you will experience the feeling of full of lyrical and mysterious.

Located in the middle of a green tea hill with peaceful scenery, Buu Minh Gia Lai Pagoda is one of the attractive check-in spots that many young people love. This is the oldest temple in Gia Lai and still retains its impressive ancient beauty.

Referring to the pagoda in Gia Lai, visitors will immediately think of Minh Thanh pagoda , a very hot place and very famous for moving followers. However, in the mountain town, there is another temple, although not too famous, but a peaceful meeting place that many people love is Buu Minh Pagoda. The temple is located on the road to explore many famous landscapes of Gia Lai, so it attracts more and more visitors. Visiting Buu Minh Gia Lai Pagoda , you will surely have peaceful moments in the tranquil space and immerse yourself in the green color of tea hills near the pagoda.

Wat Buu Minh Gia Lai is located in the area of ​​Nghia Hung commune, Chu Pah district, 15 km north of Pleiku city center. This temple is quite famous in the Central Highlands with the ancient temple architecture in the North and the Central combined with the style and architecture of Taiwan and Japanese temples.

Buu Minh Pagoda has a very unique architectural style, a combination of many architectural styles and the Northern religion. The head of the temple roof and the roof are softly designed like a canoe, the temple space is mainly built of concrete and reinforced with a large scale. The area in the main hall is 520m and the height of the big tower is 47.25m.

The roof of the pagoda has a design like that of the communal house in the Central Highlands. The front of the pagoda faces T’Nung lake , with its back resting on Tien Son mountain, creating an extremely fast feng-shui position, helping the temple’s veins always flow and flow.

Mang Den Ecotourism Site is situated in Kon Plong district, Kon Tum province. With the fresh cool air all year round and natural and majestic beauty of landscape, the site attracts more and more tourists in Vietnam travel coming here. It is also proud of “the second Dalat tourist city” in the Central Highlands.

The Mang Den Ecotourism Site is located at a height of 1,200m above sea level. Year-round, it has an average temperature of 18-20 degrees celsius. This feature has earned the area fame as "the second Da Lat tourist city" in the Central Highlands. The area nestles amidst primitive forests and a large area grown with age-old pine trees, spotted by natural lakes, waterfalls and springs. Such rare species of flora as red pine trees and Fujian cypress, medicinal plants as cinnamon and Aquilaria plant, and wild animals as python and chamois have made the Mang Den area different significantly from Da Lat in the Central Highlands province of Lam Dong or Sa Pa in the northwestern mountainous province of Lao Cai.

Living in the area are mainly the M'Nong, Xo Dang and Hre people who have well preserved their authentic lifestyle, distinctive culture and customs, and traditional crafts. These ethnic minorities have often settled nearby lakes, waterfalls or rivers and built their communal houses next to slash-and-burn rice and food crops.

The Mang Den Ecotourism Site is a part of the tourist route "Green Road in Central Highlands" connected to other ones such as "Central Heritage Road" and "Legendary Ho Chi Minh Trail" to form the transnational tourist route "Indochina Heritage Road" linking the world heritage sites in Viet Nam with ones in Laos and Cambodia.

When tourists come to Kon Tum city, there is an address that they should not overlook: Kon Tum wooden Cathedral which is beautiful and unique with a hundred year old.

Zone of the church garden has a statue of Mary holding Baby Jesus in her hands made from a pristine woody with rustic carved style of ethnic in Highlands. The crucifix and the statues decorating the outside and inside of the church as: the sheep and the saint statues were made of tree’s root in the forest making the space is tinted with colors of mountain and jungle.

You can visit Kon Tum wooden church at any given time. If you come in the season of bean flowers blooming, on the way to the church you will see the red and white color of the flower road making splendid beauty of KonTum. If you visit here at Christmas, you will see thousand parishioners belong to a lot of ethnic groups. They come to the church; they stay on the ground beside the church all the week to attend the Mass. That is the bustling and vibrant day of the church with bustling purchases scenes. And in this fair has many craft products from the village showed for sale. And if go to the church in a certain normal day, you will see the silent of a church. Two-rows of seats beside the church in the Mass are the place for people pray becomes a place for students to study in this time. 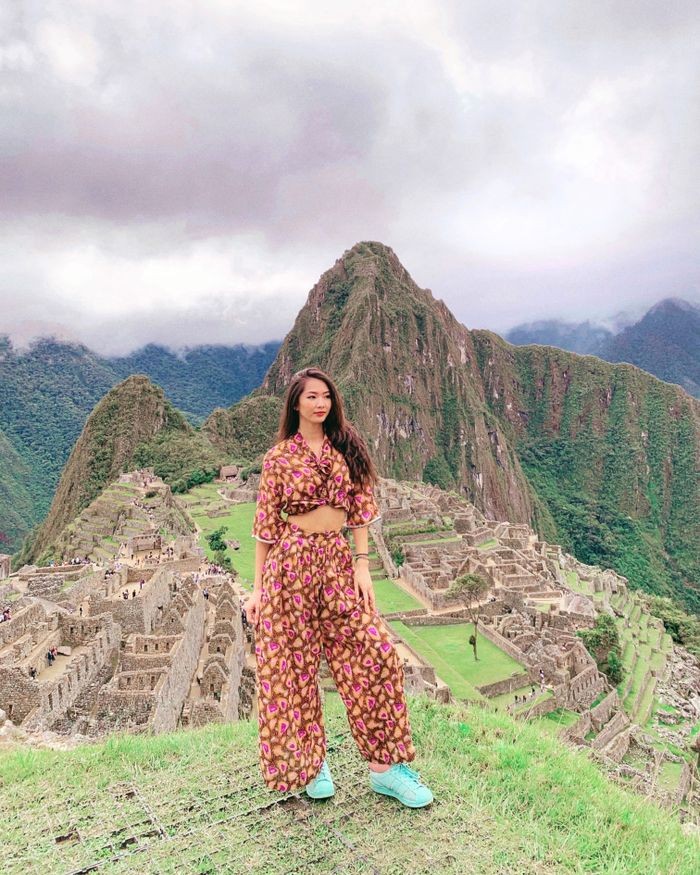 The story of the young man's journey through Vietnam below has received a lot of admiration and admiration from everyone. This is really a valuable one-in-a-lifetime experience for this young man.
August 13, 2022 | 10:26
Phiên bản di động