“I was a little dizzy after the first shot in February, no fever. The reactions were stronger after the second shot in late March, with dizzy and mild fever which wore off after two days”, the Deputy Prime Minister said on April 1 afternoon, adding that he had been well informed of the possible reactions post-inoculation and the rest of the volunteers reported no serious side effects.

“After the first dose, my body produces antibodies at a good level. However, everything is still under human trials, we couldn’t ascertain when the exactly homegrown vaccine is available. If things go as planned, Vietnam might have the first domestic Covid-19 vaccine in late Q3 or early Q4”, he was quoted by VNE.

The Vietnamese Government in early 2020 determined to urgently expedite homegrown Covid-19 vaccine researches and manufacturing, for the country is populous and might face financial troubles when it comes to importing vaccines during a prolonged pandemic period.

“I had told myself I would volunteer for the human trials in the first place”, Dam said. “Everyone’s health is equally precious. I am the Deputy Prime Minister, but first and foremost, I am a Vietnamese citizen. As the head of the National Steering Committee for Covid-19 Prevention and Control, I should do everything I could so that vaccines are doled out in Vietnam in the earliest time”.

The Military Medical Academy started injecting the second dose of Nanocovax vaccine on all volunteers during phase 2 of human trials from March 25 – April 6. Deputy PM Vu Duc Dam and Deputy Minister of Science and Technology Pham Cong Tac were given the second shot at the Academy on March 26 morning.

Do Quyet, director of the Military Medical University, said that after the second shot, the safety and efficacy of antibody generation and its antiviral ability will be re-assessed. These criteria were met after the first shot, he said.

"The Nanocovax vaccine is effective against the U.K variant," he added.

Quyet also said that Vietnam can compare the efficacy of Nanocovax with that of the AstraZeneca vaccine, which has been approved by the World Health Organization (WHO), obtaining an international license if the comparison is favorable.

He expressed confidence that Vietnam will have a commercially viable vaccine by the end of September, according to VNE.

Nanocovax, developed by Nanogen Biopharmar since May 2020, is the first locally-made vaccine candidate in Vietnam to enter human trials. It is priced at VND120,000 ($5.17) per dose. Along with injections, Vietnam’s COVID-19 Nanocovax vaccine will also be developed in the form of eye-drop and nasal spray for special subjects. 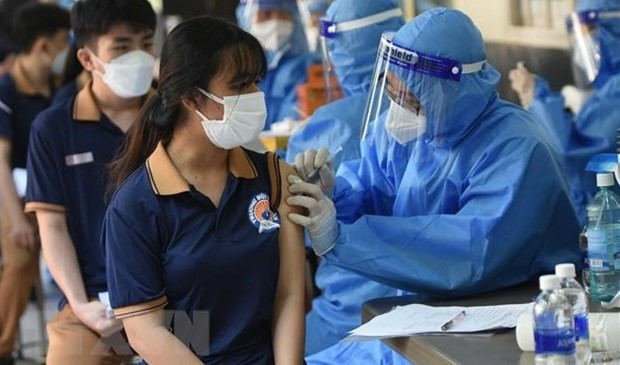