Under the auspices of the State Committee for Overseas Vietnamese Affairs (COVA), the Ministry of Foreign Affairs (MOFA), the Association for Liaison with Overseas Vietnamese (ALOV), and The Vietnamese Buddhist Cultural Center in the Republic of Korea (RoK) held an art event "Vietnam - Korea Cultural Exchange" on November 20, 2022.
Phuong Nguyen
November 22, 2022 | 08:02

This event was held in honor of Vietnam and RoK's thirty years of diplomatic relations.

Vietnamese language and culture contribute to a multicultural Korean society

Mai Phan Dung, Deputy Chairman of the COVA said that over the past 30 years, Vietnam-RoK relations have been promoted strongly by both nations.

Vietnam and S. Korea have built a strategic partnership and become leading partners of each other in all fields. People-to-people diplomacy and cultural exchanges also bring the two countries closer together.

“Nowadays, more than 200,000 Vietnamese people are living, studying, and working in the RoK, and tens of thousands of Vietnamese-Korean multicultural families have bonded the two countries together. Along with the wave of Korean investment and trade, the Korean community in Vietnam is as populous as the Vietnamese one in Korea. In that close relationship, we highly appreciate the community organizations of the two countries that have actively supported in stabilizing the lives and the development of Vietnam and RoK and contributed to strengthening the relationship between the two countries," shared Mai Phan Dung.

According to Mai Phan Dung, language and culture play a significant role in connecting the overseas Vietnamese community with their homeland. Vietnamese language and culture also actively contribute to building a multicultural Korean society, becoming a bridge connecting the people of the two countries. With that meaning, "Vietnam-Korea Cultural Exchange" is expected to be an event responding to the "Day for Honouring Vietnamese Language in Vietnamese Communities Abroad" launched by the Government.

Strengthening the friendship and cooperation between Vietnam and the RoK

Ambassador Nguyen Phu Binh, Chairman of the ALOV highly appreciates Vietnamese Buddhist nun Thich Nu Gioi Tanh in her role as President of the Vietnamese Buddhists’ Association and Director of the Vietnamese Cultural Center in the RoK. According to the Ambassador, the nun has devoted her great efforts to promoting Vietnam’s distinctive cultural identity in the host country, especially during the epidemic. Besides, she has actively contributed to the relationship between the people of the two countries. Through cultural activities, she has spread Vietnamese language and contributed to building a multicultural Vietnamese-Korean society.

Ambassador Nguyen Phu Binh, Chairman of the ALOV spoke at the event.

“Hopefully that tonight, we will hear the enthusiastic opinions of the nun and those who have had a lot of experience and effort in spreading the Vietnamese language, culture, and Vietnamese Buddhist culture in the world. They are important factors in connecting overseas Vietnamese and strengthening friendship and cooperation among Vietnam and other countries in the world.

We will also enjoy the special art performances of Vietnam and the RoK which show a part of the vivid life and the emotion of overseas Vietnamese, who are immersed in the Vietnamese and Korean culture", Ambassador Nguyen Phu Binh added.

“The event is expected to spread the good values ​​of Vietnamese and Korean culture, thereby contributing to promoting the cultural, economic, and political development and the friendship relationship between Vietnam and the RoK”, shared the nun Thich Nu Gioi Tanh.

This event included cultural activities such as a Talk Show on the topic of Vietnam - Korea Culture, and a series of articles under the theme of "Day for Honouring the Vietnamese Language in Vietnamese Communities Abroad". The fashion show with Ao Dai, Korean traditional costumes, and Vietnamese Buddhist robes was another highlight of the event.

Additionally, this event also honored organizations and individuals who have made significant contributions to the community on the occasion of the 30th anniversary of the establishment of Vietnam - the RoK diplomatic relations. 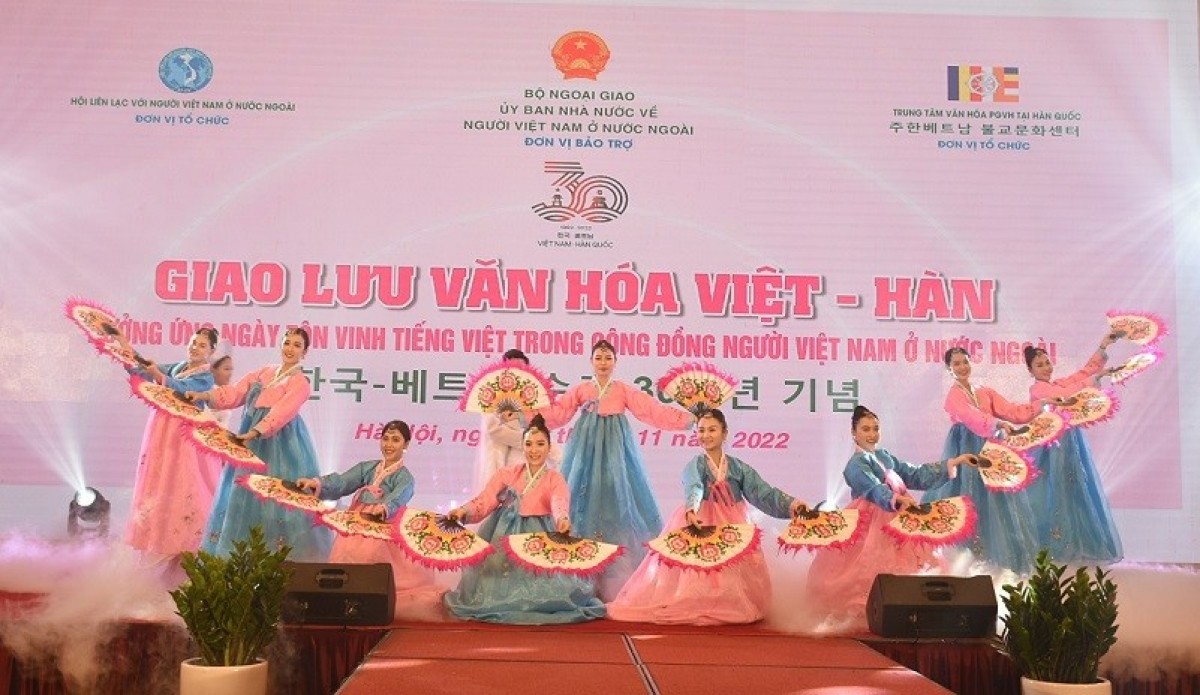