India, the United States, Japan and Australia began their largest joint naval exercises in over a decade on Tuesday, seen as part of efforts to balance China’s vast military and economic power in the region.

The annual “Malabar” wargames that India holds with the United States and Japan have been expanded to include Australia this year to cover all members of the Quad, an informal group of the four largest democracies in the Indo-Pacific.

Australia returns to the exercises after 13 years when its participation triggered strident Chinese objections. But this time the Malabar exercises will endure as all four participants seek a long-term counterbalancing strategy to China, according to VOA.

Five ships of the Indian Navy, including a submarine, were deployed in the exercise along with U.S. Navy’s John S McCain missile destroyer, Australia’s Ballarat frigate and a Japanese destroyer. Later this month, India and the United States will deploy aircraft carriers in the drills, Reuter reported.

“The exercise will showcase the high-levels of synergy and coordination between the friendly navies, which is based on their shared values and commitment to an open, inclusive Indo-Pacific and a rules-based international order,” the defense ministry said in its statement.

A drill to counter China

USS John McCain Commander Ryan T. Easterday said that "Malabar provides an opportunity for like-minded navies, sharing a common vision of a more stable, open, and prosperous Indo-Pacific, to operate and train alongside one another," emphasizing that "a collaborative approach toward regional security and stability is important now more than ever, to deter all who challenge a free and open Indo-Pacific."

And while no challenging nations were mentioned by name, the training is widely seen as sending a message to China—with which all four participating countries have been recently locked in tensions, as President Donald Trump called on the international community to rethink their relations with Washington's top strategic competitor Beijing, said Newsweek.

The exercises come at a time when the host, India, is locked in a military stand-off on the disputed land border with China. Thousands of troops are in close proximity in the western Himalayas, where India says Chinese troops have intruded across its side of the de facto border. Beijing denies any intrusion and says India has been building roads and other infrastructure in the disputed area, causing the crisis.

Australia’s diplomatic relations with China also worsened this year after Canberra led calls for an international inquiry into the coronavirus pandemic and Beijing imposed trade sanctions on Australian beef and barley. Japan is embroiled in a dispute with China over ownership of islands in the East China Sea.

Chinese Foreign Ministry spokesperson Wang Wenbin told a regular press conference that his country hoped the Malabar maneuvers could be used for the good of the region, and not to further stir divisions.

"We hope the relevant countries' military exercise could be conducive to regional peace and stability, instead of working in the opposite way," Wang said.

The U.S. has actively tried to portray the Quadrilateral Security Dialogue as a means to counter Beijing, which Secretary of State Mike Pompeo accused the Chinese Communist Party of "exploitation, corruption and coercion" during last month's Quad meeting in Japan.

Beijing's embassy in Washington accused the top U.S. diplomat at the time of "reckless smearing and groundless accusations against China" in remarks sent to Newsweek at the time.

Chinese officials have repeatedly stated that they planned to work with whoever ended up in the White House, and have denied Trump administration accusations that Beijing sought to influence the vote in any way. 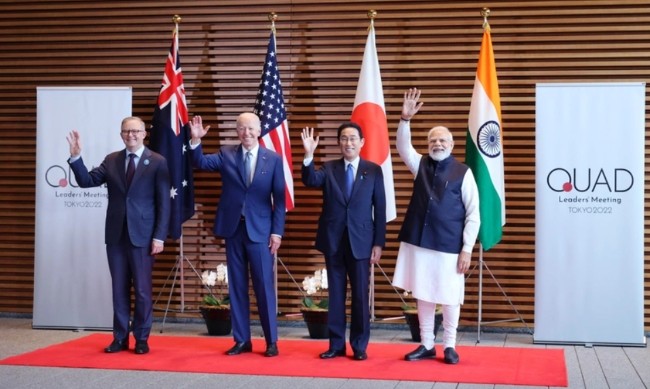