Due to Covid-19 pandemic, all events relating to the most anticipated Worldwide Developer Conference (or WWDC, as it’s known.) of Apple go entirely online and here are the annual keynote including details on updates coming to iOS, macOS, and all of the other software it builds in-house.

According to the Verge, in this event Apple gave the first look at iOS 14, the new update coming to iPhones later this year. The most notable change comes in the form of widgets that you can place on the home screen. It’s like if Apple Watch apps invaded the iPhonehome screen — it’s a really big deal that changes the look of the iOS software.

Apple is debuting these new widgets in different shapes and sizes, and the idea is that you’ll be able to have more data-rich info on your home screen. If you want more, you’ll be able to get them through the Widget Gallery.

It is also adding App Library, a new feature that automatically organizes apps based on their categories. It seems great for quickly accessing apps that normally live outside of the first or second page.

Picture-in-picture is coming to iOS 14. If you swipe away while watching a full-screened video, the window will float on your home screen, allowing you to resize and move the video. PiP isn’t a super unique feature, but Apple is making it its own by letting you minimize the PiP into a small button on the side of the screen. That way, you don’t have to exit the video if you need to look at the whole screen for a moment.

Memoji are getting an improvement in the next big software update, including more age options, accessories for Memoji, like face masks, and emotions, like blushing. This might seem like a small addition, but it’s great if you’ve been wanting to live the dream of communicating solely through Memoji.

TechCrunch reported that coming with iOS 14 is a big update to Apple Maps that includes a new cycling-specific navigation, among other things. It can alert you to increases in elevation as well as a notification if you’ll need to carry it up stairs to get where you’re going. Apple says this is coming first to New York City, Los Angeles, San Francisco, Shanghai, and Beijing, though more will come in the months following iOS 14’s release.

Additionally, it will get a view that lets EV drivers know where chargers are along their routes.

Apple introduced a new way to unlock and start your car, well, just the BMW 5 Series for now. You can register a key in your Apple Wallet, and when you walk up to a supported car, you’ll unlock it via NFC, then start the engine once your phone is resting on a pad. The keys are stored on-device, and it can be deleted from the cloud if you need to. What’s also cool about this feature is that you can create unique driving profiles for other iPhone users, giving user-specific permissions for, say, your kid, or no restrictions at all for someone else, like a spouse or other trusted person.

App chips are coming in IOS 14

Apple has debuted App Clips, which are like its version of Android’s Instant Apps. The gist is that you won’t need to download a full app to be able to gain access to what it offers, in addition to being able to make a purchase through it via Apple Pay. It seems great if you’re someone who doesn’t want to download more apps than you really need.

Ipad has a few changes when upgrading to IpadOS 14

Apple is touting a new sidebar as its way of making it much easier to navigate apps. It showed it working on Apple Music and other apps. If you’re using your iPad as a laptop replacement, the sidebar should make it easier to do more without having to touch the screen. Similar to iOS 14, widgets are coming to the next version of iPadOS. It’s not clear yet if you can bring those out of the today view and into the home screen, like you can on iPhone.

Apple also redesigned search on iPad, and it looks almost exactly like Spotlight on macOS. It can help you find contacts, search on the web, or serve as a Launchpad-like function to launch apps. 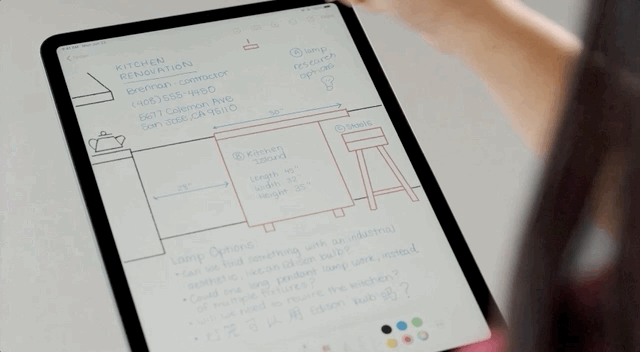 Apple debuted a new feature called Scribble, which allows you to write in any text field with the Apple Pencil, then it will be automatically converted to text. The feature can automatically detect the context of the information you write, like a phone number or address, then direct you to the correct app when it’s tapped.

This feature can also render handwriting in multiple languages into text on the iPad.

Airpods will soon be able to seamlessly switch devices 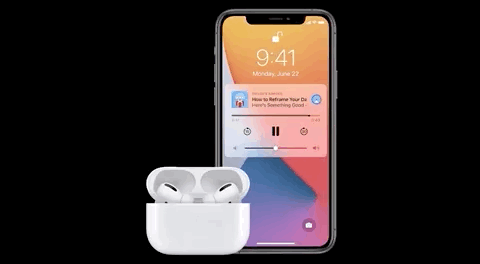 Apple is updating the software running on AirPods to let them connect automatically to whichever paired device starts playing audio. You’ll no longer need to manually select which source you want to connect to. You can see it working in the GIF above.

Sleep tracking is coming with WatchOS 7

Apple is using machine learning to track your sleep. It utilizes the Apple Watch’s sensor to track your motion. The companion app on iPhone doesn’t require an Apple Watch to use, but your metrics will likely be a little more in-depth with one. Apple didn’t dive into the specifics on how sleep is tracked, so we’ll be on the lookout for that in the future.

Handwashing is a big deal right now, given the coronavirus pandemic. With that, watchOS 7 is getting a feature that uses machine learning to determine when you start washing your hands. The watch’s microphones listen for the sound of splashing water to confirm that you’re actually washing your hands, then it starts a cute countdown on the watchface.

Apple develops a new smart home standard alongside Google, Amazon and others

Apple wants to broaden what kind of smart home tech that its users can use, in addition to HomeKit-compatible devices, so it formed a new alliance with the likes of Google, Amazon, Zigbee, and other companies to do just that. It absolutely flew through this section without much other info, but we’ll be watching to see where this goes.

If you’ve ever wanted to easily switch profiles so someone else can play an Apple Arcade title without deleting your progress, you’ll be able to easily do that with an upcoming update. Apple is also bringing support for the Xbox Elite 2 wireless controller and the Xbox Adaptive controller.

Apple TV is getting picture-in-picture in TVOS 14

Any video app in tvOS 14 will be able to display in a PiP formation on Apple TV. Simply put, you’ll be able to watch more stuff on your TV without having to switch apps. To give an example, you can keep tabs on the news while you work out.

Apple debuted its next major desktop software update, called macOS Big Sur. It features a big overhaul in design that brings it more in line with where iOS and iPadOS have been heading for the past few years. It’s even getting a lot of the features coming to iOS 14 and iPadOS 14, like widgets, messaging improvements like grouping and pinned conversations, and the ability to edit your Memoji.

Safari is getting better tab management in macOS Big Sur

Apple has been using Intel-based processors for years, but it’s making the long-rumored switch to its own silicon. It has been using its own tech for iPhones and iPads, and it’s not making the jump to covering its entire suite of computing products.

The change is huge. It’s a big change for hardware, unleashing Apple’s own efforts in making components instead of being tied it to Intel’s progress, but it’s also a huge shift in software. Apple is making it possible to run apps made for Intel-based apps on the new Macs, as well as apps from other environments, like Linux. Additionally, thanks to using custom hardware, it can even run iPhone and iPad apps, which is a huge deal, to say the least.