Step Into The Wilderness: Visit The Mesmerizing “Garden of The Gods”

Garden of the Gods, a mesmerizing public park with 300-million-year old sandstone rock formations, is a famous destination in the United States.
Charlotte Pho
October 12, 2021 | 16:12

Garden of the Gods is a public park located in Colorado Springs, Colorado, United States. It was designated a National Natural Landmark in 1971.

History of “Garden of the Gods”

The garden's red rock formations were created during a geological upheaval along a natural fault line millions of years ago. Archaeological evidence shows that prehistoric people visited Garden of the Gods about 1330 BC. At about 250 BC, Native American people camped in the park; they are believed to have been attracted to wildlife and plant life in the area and used overhangs created by the rocks for shelter. Many native peoples have reported a connection to Garden of the Gods, including Apache, Cheyenne, Comanche, Kiowa, Lakota, Pawnee, Shoshone, and Ute people.

In 1879 Charles Elliott Perkins, a friend of William Jackson Palmer, purchased 480 acres of land that included a portion of the present Garden of the Gods. Upon Perkins' death, his family gave the land to the City of Colorado Springs in 1909, with the provision that it would be a free public park. Palmer had owned the Rock Ledge Ranch and upon his death it was donated to the city.

Helen Hunt Jackson wrote of the park, "You wind among rocks of every conceivable and inconceivable shape and size... all bright red, all motionless and silent, with a strange look of having been just stopped and held back in the very climax of some supernatural catastrophe."

In 1995 the Garden of the Gods Visitor and Nature Center was opened just outside the park.

Hiking & Events - There are 15 miles of trails in the park. The Perkins Central Garden Trail is a 1 1/2 mile paved trail that is wheelchair and stroller accessible. Stop by the Visitor & Nature Center to pick up a free map with all of the hiking and biking trails or take one of their guided walks. From nature walks, Geo-Trekker Theater, arts & crafts, children’s programs, and history talks -- the Garden of the Gods Visitor & Nature Center hosts a wide variety of fun and educational experiences year-round. Every guest has different passions and interests, so a variety of programs have been created to encourage visitors to enjoy the park in the way which is most meaningful to them. There is rock climbing, hiking, yoga, adventure tours, interpretation, meditation, painting – the sky’s the limit at the Garden of the Gods Visitor & Nature Center!

Other Ways to See the Park - Explore Garden of the Gods on a Segway or on a Jeep tour! Short and long tours are provided by Adventures Out West.

Birding - A variety of birds can be seen in Garden of the Gods Park.

Rock Climbing - Rock climbing is permitted in the park. You must fill out the free registration form and abide by all rules.

The outstanding geologic features of the park are the ancient sedimentary beds of deep-red, pink and white sandstones, conglomerates and limestone that were deposited horizontally, but have now been tilted vertically and faulted into "fins" by the immense mountain building forces caused by the uplift of the Rocky Mountains and the Pikes Peak massif. The following Pleistocene Ice Age resulted in erosion and glaciation of the rock, creating the present rock formations. Evidence of past ages can be read in the rocks: ancient seas, eroded remains of ancestral mountain ranges, alluvial fans, sandy beaches and great sand dune fields.

The Garden of the Gods Park is popular for hiking, technical rock climbing, road and mountain biking and horseback riding. It attracts more than two million visitors a year, making it the city's most visited park. There are 21 miles of trails. Annual events including summer running races, recreational bike rides and Pro Cycling Challenge Prologue also take place in this park.

The main trail in the park, the 1.5-mile Perkins Central Garden Trail, is paved and wheelchair-accessible, running "through the heart of the park's largest and most scenic red rocks". The trail begins at the North Parking lot, the main parking lot off of Juniper Way Loop.

Because of the unusual and steep rock formations in the park, it is an attractive destination for rock climbers. Rock climbing is permitted, with annual permits obtained at the City of Colorado Springs' website. Climbers are required to follow the "Technical Climbing Regulations and Guidelines", which includes using proper equipment, climbing in parties of two or more, and a ban on staining chalks. Precipitation makes rocks unstable and therefore climbing is not allowed when the rocks are wet or icy. There are fines for unregistered climbers and possibly rescue costs. Several fatalities have occurred over the years, often when unlawful climbers fail to use proper safety equipment, or, more rarely, when a lawful climber falls due to equipment failure or user error. 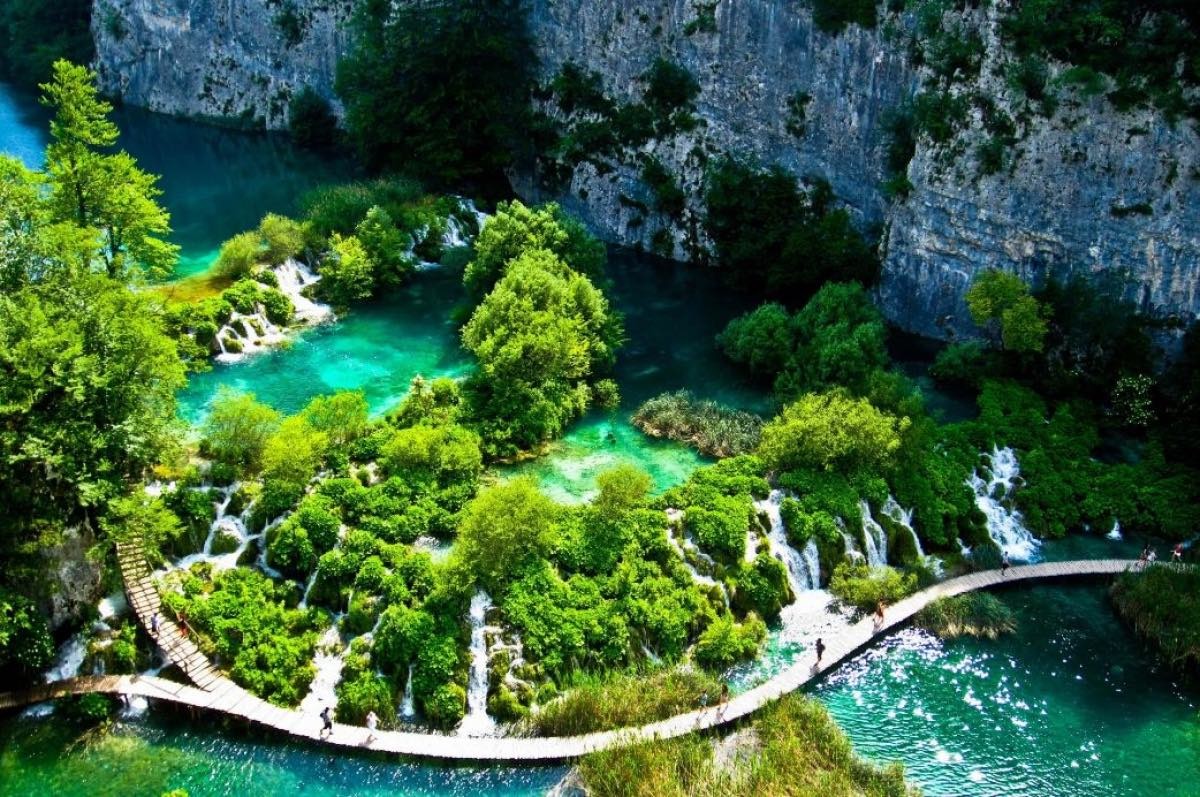