Nguyen Ngoc Cam, aged 44, becomes the first Vietnamese-Korean chosen by the ruling Democratic Party of Korea (DP) to run for the 21st parliamentary elections scheduled for this April. 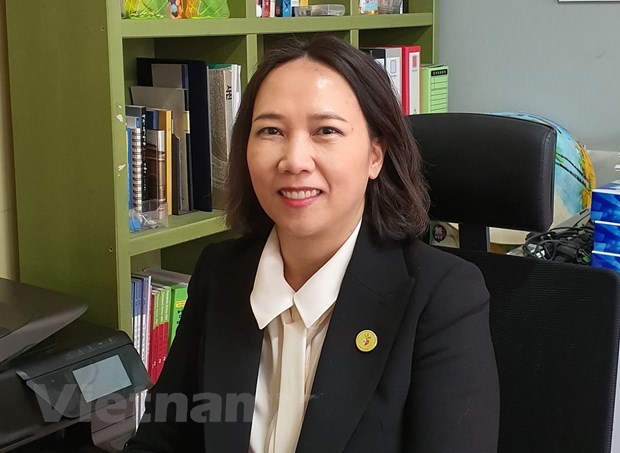 Nguyen Ngoc Cam, a Vietnamese-Korean, was chosen by the ruling Democratic Party of Korea (DP) to run for the 21st parliamentary elections in the Republic of Korea (Photo: VNA)

Cam, born in Long Thanh district, Vietnam’s Dong Nai province, got married with a Korean engineer when she worked as a translator for a Vietnamese construction firm in 1996. She left for the RoK in 1997, and was granted Korean citizenship one year later.

While managing a forum on Korean-Vietnamese multicultural families in 2004, she gave advice, and helped many Vietnamese brides handle challenges such as language and culture differences when they began a new life in the country.

She then became an activist for the rights of immigrants in the RoK after studying Korean and getting master’s degree on law at Konkuk University. Cam recommended local authorities with rational policies for immigrants, as well as made efforts to build a multicultural society in which people respect each other, contributing to nurturing the Vietnam-RoK relations.

Three years ago, she was elected as Chairwoman of the Vietnamese People Association in the RoK with 200,000 members. She is now a member of the Presidential Committee to Commemorate the 100th Anniversary of the Establishment of the Provisional Government of the RoK, Director of the Korea Support Centre for Foreigners and Managing Director of the support centre for migrant workers in Seoul.

With considerable contributions to the Vietnamese community in the RoK and the immigrant community there in general, Cam received a multitude of certificates of merit from the Korean President, and Vietnamese State.

The RoK’s upcoming legislative elections will be on April 15./.

Vietnam to conduct 12 repatriation flights for citizens stranded in US