Prime Minister Nguyen Xuan Phuc has requested ensuring democracy, fairness, safety and thrift in the election of deputies to the 15th National Assembly and the People’s Councils at all levels for the 2021-2026 tenure.
Tarah Nguyen
thuyhang.vietnamtimes@gmail.com January 15, 2021 | 14:56

In a directive dated January 14, PM Phuc asked the Ministry of Information and Communications (MIC) to coordinate with relevant agencies to direct news agencies to disseminate the significance and importance of the elections, the right to vote and to stand as a candidate of citizens to officials, public servants, armed forces and people from all walks of life.

The Ministry of Planning and Investment should instruct the General Statistics Office to guide its provincial and municipal chapters to provide population data until December 31, 2020 to serve as a foundation to count the number of NA and People’s Council deputies at each administrative unit.

The Government leader directed the Ministry of Transport and the MIC to work on specific plans to ensure smooth transport and information during the preparation and organisation of the general election, especially before and in the election day of May 23, 2021, according to the VNA.

The Defence Ministry and the Ministry of Public Security should have plans to deploy personnel to ensure political security and social safety and order, and stay ready to respond to natural disasters.

The Finance Ministry has to promptly allocate funding for centrally-run agencies and localities to carry out election work.

Meanwhile, the Ministry of Agriculture and Rural Development should work with relevant agencies to have plans to actively respond to possible disasters, while the Government Inspectorate has to guide the asset declaration for candidates, and promptly solve denunciations and complaints of citizens before, during and after the elections.

The Government leader asked the Ministry of Internal Affairs to be responsible to ensure the progress of the general elections.

Meanwhile, the People’s Committees at all levels will organise the general elections as directed by the National Election Council, the National Assembly Standing Committee, the Government and the Prime Minister, and the Vietnam Fatherland Front Central Committee.

Also, a press center for the 13th National Party Congress will be opened at the National Convention Center in Hanoi next Friday.

Regulations on reporting and attending press conferences have been announced by the Party Central Committee's Commission for Information and Education.

500 domestic reporters and technicians and 60 correspondents from foreign news agencies have registered to work at the press center. More than 60 reporters have also registered to cover the Congress online.

At the request of organizers, all reporters covering the Congress will undergo COVID-19 testing.

On January 13, the Vietnam Fatherland Front's (VFF) chapters at all levels must perform their duties in holding consultations to select and nominate candidates for the election of deputies to the National Assembly and all-level People’s Councils in the 2021-2026 tenure, said President of the VFF Central Committee Tran Thanh Man, reported the VNS.

He required all-level VFF chapters to participate in the supervision of the election, and coordinate with same-level People’s Committees and People’s Councils to set up organisations for consultation work in candidate nomination, ensuring objectivity, impartiality, and accuracy.

According to the official, the standing board of the VFF’s Central Committee has issued plans and documents regulating and guiding consultation work in candidate nomination.

The board will also receive petitions and denunciations related to the election in line with regulations.

The first consultation conference on candidate nomination will take place on February 5. The second conference will be held before March 19 and the third before April 18. 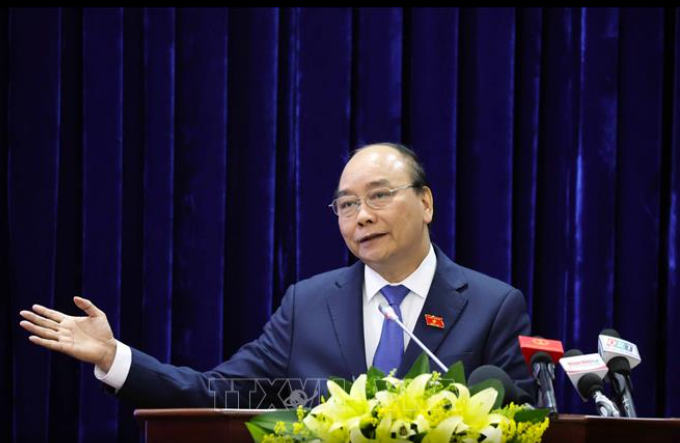 Prime Minister Nguyen Xuan Phuc attended a ceremony on January 3 in the central province of Quang Nam province to mark the 75th anniversary of the first election of the Vietnamese National Assembly (January 6).
January 04, 2021 | 11:05