United Nations Peacekeeping medals were given to Vietnamese peacekeepers at Vietnam’s Level-2 Field Hospital No. 2 (L2FH2) in South Sudan for their outstanding contributions.

At a medal parade ceremony held in Bentiu, South Sudan on January 22, Head of the United Nations Mission in South Sudan (UNMISS) Bentiu Field Office Hiroko Hirahara and Sector Unity Commander for UNMISS Major General Shamim Kamal presented the medals to all 63 members of the L2FH2.

This is a recognition from the UN of the hospital’s efforts during their mission in South Sudan, as well as being a testament to Vietnam's contributions as an active and responsible member of the UN, contributing to peace and stability around the world.

Speaking at the event, Hiroko Hirahara expressed her sincere thanks to the Vietnamese government for deploying the hospital to the UN peacekeeping mission.

According to Nhan Dan, Hiroko Hirahara affirmed that amid the complicated developments of the COVID-19 pandemic, Vietnam’s field hospitals have played an important role in pandemic control and prevention at the Bentiu base, as well as actively contributing to the implementation of response plans and strictly following the regulations of the mission as well as those of the World Health Organisation.

The UN official also hailed the L2FH2 for its active participation in Civil-Military Co-operation (CIMIC) activities, including HIV/AIDS counseling, supporting Bentiu Hospital, sharing medicine and equipment with local authorities, and providing useful devices and learning tools for local students, in addition to their consistent and professional work.

Thanking the UNMISS and other relevant units for their support at the hospital over the past year, Director of the L2FH2 Lieutenant Colonel Vo Van Hien, expressed how it was both his and his team’s honor to make contributions to solidarity and cooperation within the UN’s organs.

In the conference held on January 7 chaired by Deputy Minister of National Defence Sen. Lt. Gen. Nguyen Chi Vinh, who is also head of the Ministry of National Defence's steering committee for participation in UN peacekeeping operations, Major General Hoang Kim Phung, Director of the Vietnam Department of Peacekeeping Operations, said that from June 2014 to December 2020, Vietnam sent 179 officers and soldiers, including 126 military medical staff of two level-2 field hospitals, to UN peacekeeping missions in South Sudan, the Central Africa Republic and the UN Peace Operation Department at the UN headquarters, adding that the move was highly appreciated by the UN and supported by domestic and world opinions.

According to Deputy Defence Minister Senior Lieutenant General Nguyen Chi Vinh, Vietnam has so far deployed two field hospitals with 126 staff members to South Sudan. The term of the field hospital No.2 has been extended for nearly five months, and during the extended time, the hospital has not been supplied with materials and equipment from the UN for its operation, Vinh said, according to Vietnam Plus.

After more than a year in the UN peacekeeping mission, L2FH2 has received and treated over 1,600 patients, performed 28 surgeries, and transported seven patients for emergency treatment by airway to higher-level hospitals, while successfully handling complex medical emergencies that require a high level of expertise.

In particular, the hospital examined, screened, and treated more than 59 suspected COVID-19 cases while protecting the hospital staff, participated in anti-epidemic support for other units in the mission, as well as providing professional training and advising on disease prevention and control measures in the stationed area, Dan Tri cited.

The hospital earlier received compliments from the UN health division based in New York as the hospital with the best preparation within the UNMISS in response to COVID-19, in addition to other commendations from the heads of the UN health agency, the UN peacekeeping force’s medical division, and the UNMIS health department. 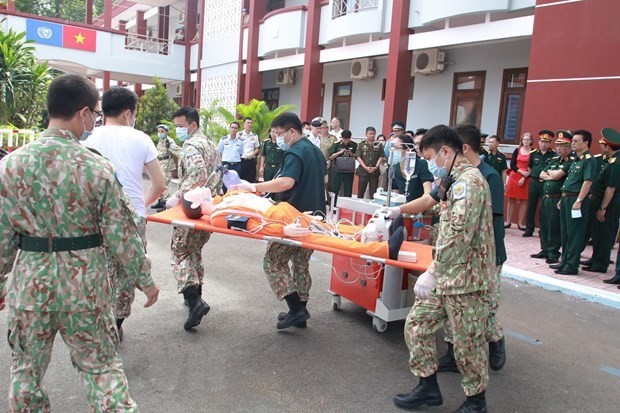 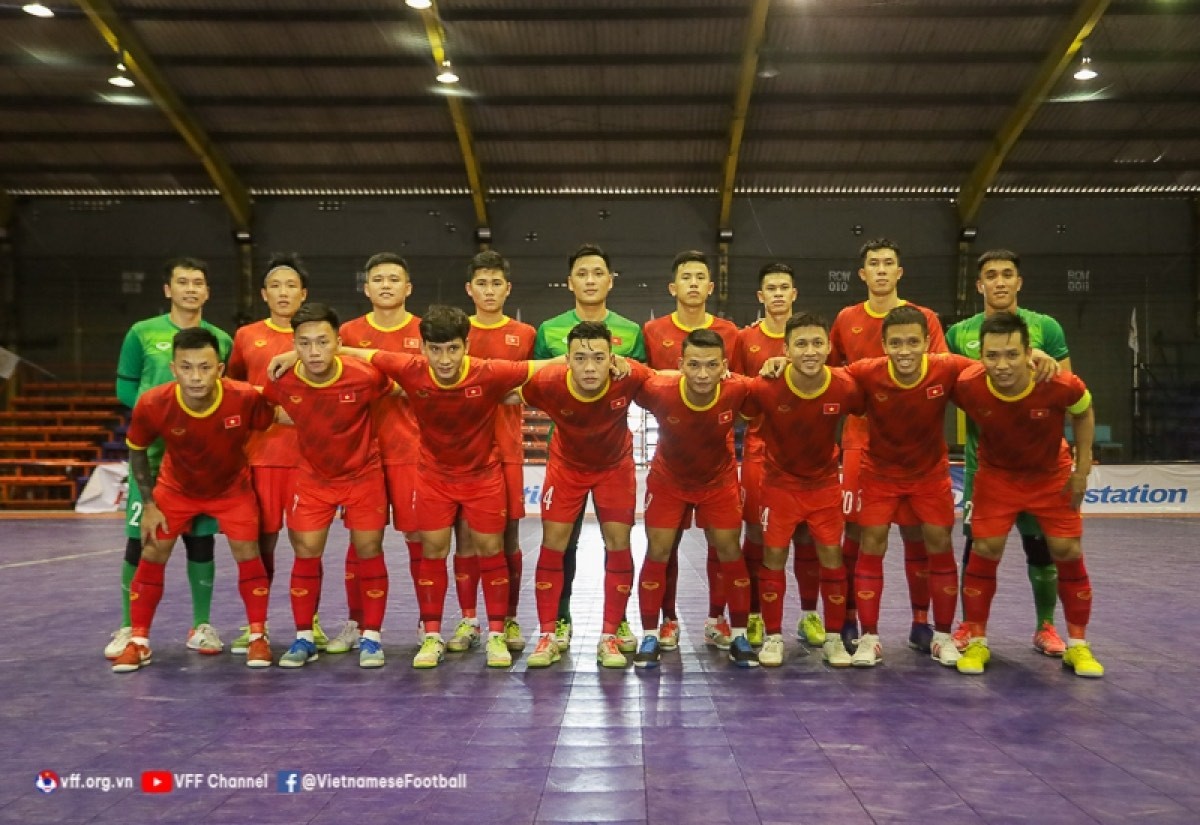 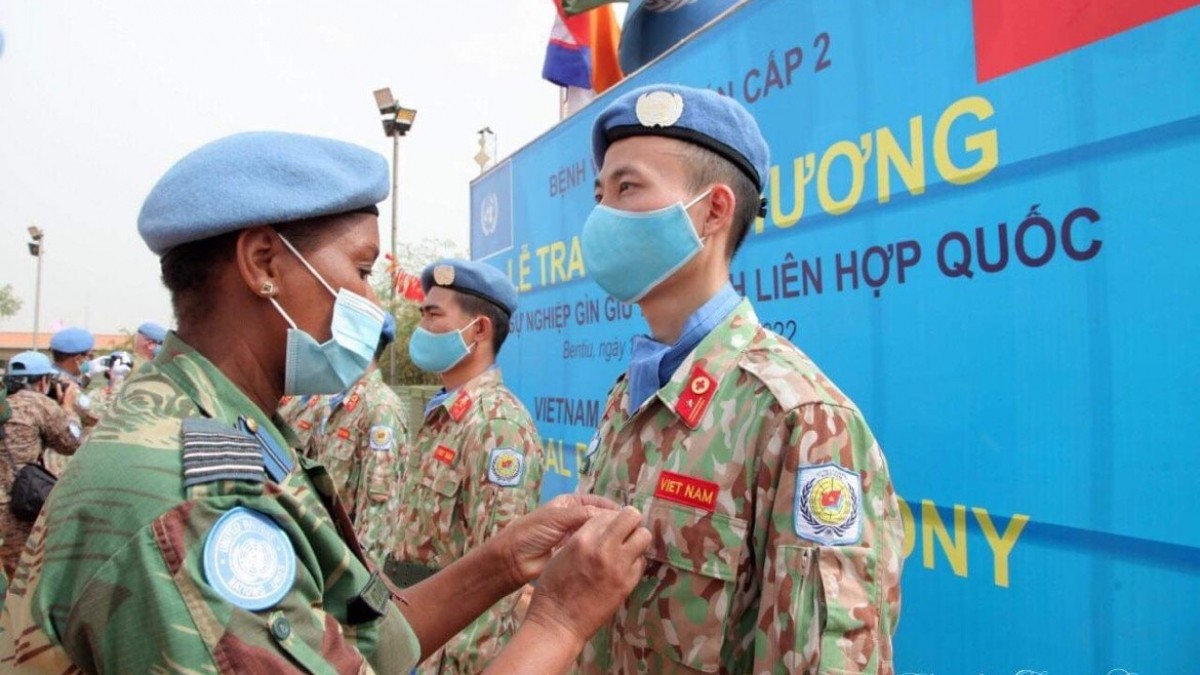 Vietnam's Level 2 field hospital No. 3 in South Sudan was awarded the United Nations (UN) Peacekeeping Medal for its dedication and outstanding contributions.
March 16, 2022 | 14:01