The groundbreaking is more meaningful as it takes place at a time when the Cambodian Government and people are celebrating the 41st anniversary of the victory (January 7, 1979 - 2020). 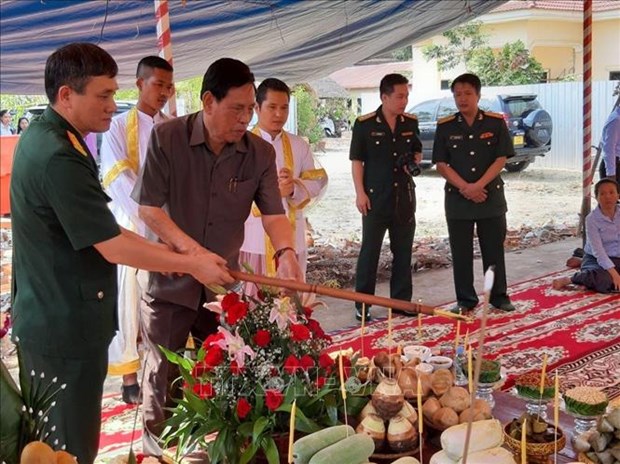 At the groundbreaking ceremony (Photo: VNA)

Construction of a Vietnam-Cambodia Friendship Monument began in the Cambodian province of Kampong Speu on March 2.

This is the 20th out of 22 friendship monuments to be upgraded or built across Cambodia, aiming to affirm the great historical significance of Vietnamese volunteer soldiers’ assistance to the neighbouring country in the fight against the Pol Pot genocidal regime.

The new friendship monument is built on the foundation of the previous one that had existed in Kampong Speu since the 1980s.

The groundbreaking ceremony saw the attendance of Vice Chairman and General Secretary of the National Council of the Solidarity Front for the Development of Cambodian Motherland Nhem Valy, leaders of Kampong Speu province and Vietnamese Defence Attaché in Cambodia Colonel Nguyen Thanh Chinh, among others.

Sam Saophal, Director of Kampong Speu’s Department of Cults and Religion, described the monument as a demonstration of the traditional solidarity between Vietnam and Cambodia.

People in Kampong Speu always keep in mind the great support of Vietnamese volunteer soldiers in reviving Cambodia, the official stressed. The monument also serves to express respect and appreciation for volunteer Vietnamese soldiers and those of the Cambodian Royal Army who laid down their lives for independence, freedom and prosperity of both nations./.

Marching towards national salvation – A valuable and factual documentary (Part 4)

Marching towards national salvation – A valuable and factual documentary (Part 3)

Hon Do - The land for best sunrise sightseeing in Ninh Thuan