On the occasion of the 50th anniversary of diplomatic relations between Switzerland and Vietnam (October 11, 1971 - October 11, 2021), Ambassador of Switzerland to Vietnam Ivo Sieber wrote an article reviewing the history of diplomatic relations and cooperation between the two countries over the past half century. Vietnam Times would like to share his full writing.
Tarah Nguyen
thuyhang.vietnamtimes@gmail.com October 10, 2021 | 00:37

With the formal establishment of diplomatic relations on the 11th October of 1971, prospects of how Viet Nam and Switzerland would henceforth cooperate were lifted to a new level. It is hardly an exaggeration to say that not even the most daring visionaries could have predicted the quality and intensity of our relations today.

Early Swiss-Vietnamese relations date back to the second half of the nineteenth century, with Swiss trading companies, such as Diethelm and Biedermann, laying the ground work for relations beyond business. While most Swiss then living in Viet Nam were engaged in trade, engineering or agriculture, the country also attracted travellers, adventurers and explorers. Clearly the best known among them is Swiss-born bacteriologist Alexandre Yersin. His curiosity and vigour opened new areas of science, healthcare and agriculture for Viet Nam and left a vivid legacy that still prevails today. Not least his discovery of the pest bacillus had lasting impacts beyond Viet Nam.

In 1954, Switzerland hosted the Geneva Conference on Indochina. With its neutral status, Switzerland enabled the first foray by the Democratic Republic of Viet Nam into multilateral diplomacy.

The next key moment, which we commemorate today, happened 50 years ago. In 1971, Switzerland became one of the first Western countries to establish diplomatic relations with Viet Nam. While the Treaty concluded on 11 October 1971 initiated formal diplomatic relations, a first Swiss Embassy was opened at the Metropole Hotel in Ha Noi in 1973. A plaque where the Embassy offices were located serves as testimony, while accounts of former colleagues recall the challenges of operating a diplomatic mission at a time when Viet Nam was still embroiled in the troughs of war.

After 1975, numerous Swiss nationals and well established Swiss companies, such as Nestlé or Ciba-Geigy, international trading companies, the Federation of Swiss Watch Manufacturers and the Swiss Association of Machinery Manufacturers maintained their presence in Viet Nam, along with diplomatic and humanitarian activities.

The steady commitment and belief in Viet Nam set the basis for bilateral relations to broaden and intensify from 1990 onwards. Viet Nam’s economic reforms and rapid integration into the world economy from 2000 onward further facilitated the strengthening of Vietnamese-Swiss relations, leading to the opening of a Swiss Consulate General in Ho Chi Minh City in 2015. On its side, Viet Nam inaugurated a Consulate in Geneva in 1984 and elevated it to the rank of a Consulate General and UN Mission 10 years later. In 2000, Viet Nam opened an Embassy in Berne; this diplomatic presence was further extended this year with a new honorary consulate covering the cantons of Zurich and Zug. High-level visits in both directions, including during this jubilee year, are another regular feature of the past decades of cooperation.

Over the past 50 years, relations evolved, broadened and deepened. Cooperation initially strongly focused on humanitarian and development assistance. Over the course of the past 3 decades, the Swiss government provided more than Swiss Francs 600 million (VND 15 trillion) to support Viet Nam’s socio-economic development. The Swiss Agency for Development Cooperation SDC had a permanent presence in Hanoi since 1991 and was joined 4 years later by the State Secretariat for Economic Affairs SECO. While SDC’s engagement was phased out in 2016, SECO’s program was stepped up, with the latest four-year program 2021-2024 launched during the official visit to Hanoi of Swiss Vice-President Ignazio Cassis.

Today, cooperation by private companies from both countries has taken the lead role and is now the main driver of economic development. Viet Nam also benefits from an annual trade surplus of over Swiss Francs 2 billion (VND 50 trillion). With over 100 Swiss companies present in Viet Nam and some 20’000 jobs created in Vietnam, Swiss direct investments in Viet Nam currently amount to around Swiss Francs 2 billion (VND 50 trillion). The potential for more Swiss investments is sizable, as Switzerland is ASEAN’s 9th largest foreign investor, but so far only ranks 19th in Viet Nam. With this positive outlook, both Viet Nam and Switzerland – together with partners of the European Free Trade Association EFTA – are redoubling efforts for the conclusion of a progressive Free Trade Agreement that will boost benefits for all parties. Last month’s meeting between Vietnamese President Nguyen Xuan Phuc and Swiss President Guy Parmelin on the side-lines of the 76th UN General Assembly underscored this commitment.

Commemorating 50 years of diplomatic relations is an important moment for any two countries. Viet Nam’s and Switzerland’s accomplishments achieved over the past half century underscore the strength of this partnership as well as the trust and commitment for the future. Next month’s inauguration of the Swiss designed “Geneva Conference Room” at the Diplomatic Academy of Viet Nam bestowed by the Swiss government is not only a symbol of this year’s commemoration, but also a promise for the future. Our two countries’ history augurs well, and I am confident that the next 50 years of Vietnamese-Swiss relations will continue to be strong, mutually beneficial and successful.

Ambassador of Switzerland to Viet Nam 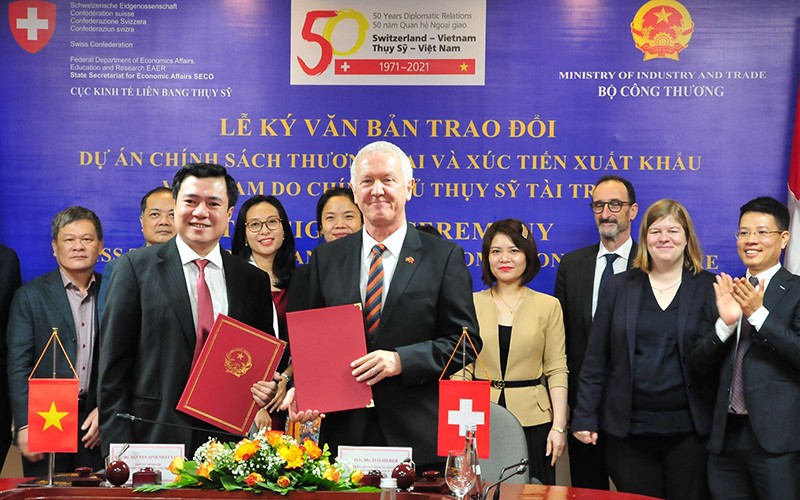 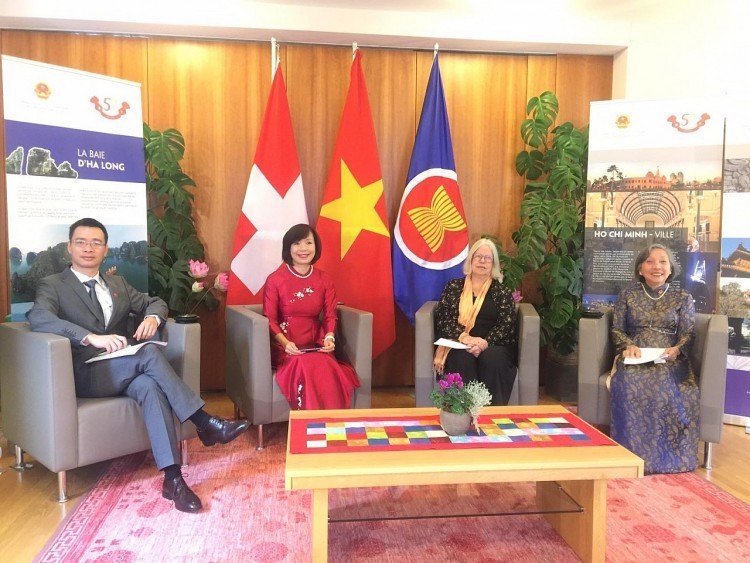 On Oct. 9, the Vietnamese Embassy in Switzerland participated in organizing the online Vietnam Day in Switzerland on the occasion of the 50th anniversary of the establishment of diplomatic relations between Vietnam and Switzerland.
October 10, 2021 | 22:07