Rallies and protesters have called for an end to anti-Asian violence, amid a spate of racially motivated attacks targeting Asians, Asian Americans and Pacific Islanders.
Ruby Lee
lethanhha8991@gmail.com March 29, 2021 | 16:43

Hundreds of people took to the streets this weekend to demonstrate against violence toward Asian Americans and Pacific Islanders following the shooting in Atlanta last week that killed eight people, six of them women of Asian descent, USA Today reported.

There has been a significant increase in violence against Asian Americans and Pacific Islanders nationwide during the pandemic, including a 6% uptick in online harassment, such as the use of racist and xenophobic slurs. In one recent incident, a 75-year-old woman was punched by man in the streets of San Francisco.

"We are Americans, we are mothers, we are friends, we live here," said Ling Liu, who marched in Indianapolis on Saturday. "We love our community. This affects all of us, and we don't want any violence against anyone."

According to ABC News, rallies held in dozens of cities Saturday called for an end to anti-Asian violence, amid a spate of racially motivated attacks targeting Asians, Asian Americans and Pacific Islanders.

"We're out here to say that we're not going to tolerate racism towards Asian American communities," Satya Vatti, an organizer with the Answer (Act Now to Stop War and End Racism) Coalition, told Atlanta ABC affiliate WSB, at a rally against Asian hate in Atlanta.

The rally was just one of 60 that the coalition organized across the U.S. on Saturday, Vatti said.

Authorities are still investigating the motives behind the March 15 shootings. They have said that the suspect, Robert Aaron Long, admitted to the shootings and claimed they weren't racially motivated.

"We need to continue to be loud and stand together to stop hate crimes,'' Los Angeles County Supervisor Holly Mitchell said, according to Los Angeles ABC station KABC. "Now is not the time to be silent. Let's continue to support each other and speak out against hate.''

According to USA Today, there has been a significant increase in violence against Asian Americans and Pacific Islanders nationwide during the pandemic, including a 6% uptick in online harassment, such as the use of racist and xenophobic slurs. In one recent incident, a 75-year-old woman was punched by man in the streets of San Francisco.

Crimes targeting Asian Americans have risen dramatically since the beginning of the coronavirus pandemic. Stop AAPI Hate, a coalition that tracks incidents of violence and harassment against Asian Americans and Pacific Islanders in the U.S., reported nearly 3,800 instances of discrimination against Asians in the past year. The actual number could be much higher, npr reported.

Since the start of the pandemic last spring, Asian Americans have faced racist violence at a much higher rate than previous years. The NYPD reported that hate crimes motivated by anti-Asian sentiment jumped 1,900% in New York City in 2020. Stop AAPI Hate, a reporting database created at the beginning of the pandemic as a response to the increase in racial violence, received 2,808 reports of anti-Asian discrimination between March 19 and December 31, 2020.

The violence has continued into 2021, and President Joe Biden signed an executive order denouncing anti-Asian discrimination shortly after taking office in January. While anti-Asian violence has taken place nationwide and particularly in major cities, the uptick in attacks in 2021 has been particularly focused in the Bay Area, especially in San Francisco and Oakland’s Chinatowns.

According to Time, many attribute the 2020 uptick to the xenophobic rhetoric of Biden’s predecessor; former President Trump repeatedly referred to COVID-19 as “the China virus,” blaming the country for the pandemic. In doing so, Trump followed in a long American history of using diseases to justify anti-Asian xenophobia, one that dates back to the 19th and 20th centuries and has helped to shape perception of Asian Americans as “perpetual foreigners.”

“There’s a clear correlation between President Trump’s incendiary comments, his insistence on using the term ‘Chinese virus’ and the subsequent hate speech spread on social media and the hate violence directed towards us,” says Russell Jeung, a co-founder of Stop AAPI Hate and a professor of Asian American Studies at San Francisco State University. “It gives people license to attack us. The current spate of attacks on our elderly is part of how that rhetoric has impacted the broader population.” 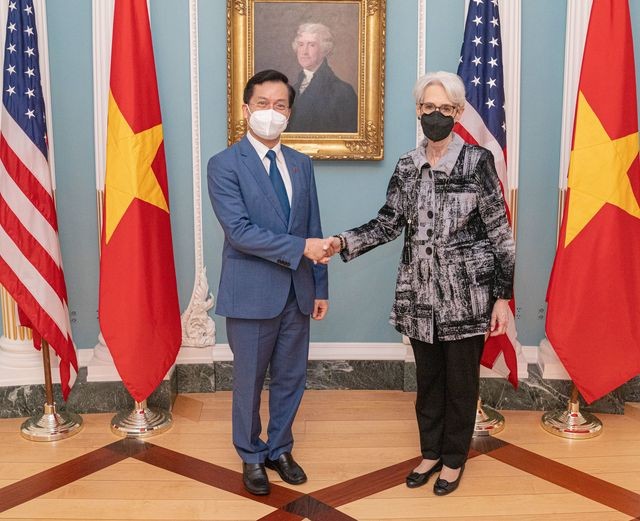 US Deputy Secretary of State Conducts Trip to 4 Asian Countries, include Vietnam

US Deputy Secretary of State Wendy Sherman to set out Sunday on a nine-day trip to the Republic of Korea, the Philippines, Vietnam and Laos
June 06, 2022 | 12:15