H&M, Nike, Adidas, and other brands are caught in a spiraling conflict over allegations of forced labor in the production of cotton in China's Xinjiang region.
Valerie Mai
mnghonganh@gmail.com March 30, 2021 | 10:57

H&M, Nike, Adidas, and other brands are caught in a conflict over Xinjiang after Western governments imposed sanctions on officials accused of abuses. State media called for a boycott of H&M for saying it would no longer use cotton from Xinjiang and are criticizing other brands for expressing concern about reports of forced labor.

China stepped up pressure Monday on foreign shoe and clothing brands to reject reports of abuses in Xinjiang, telling companies that are targeted by Beijing for boycotts to look more closely and pointing to a statement by one that it found no forced labor. “When the stick of sanctions is brandished on Xinjiang, it will also hit your own head,” a spokesman for the Xinjiang regional government, Xu Guixiang, said at a news conference in Beijing. H&M should “look into this matter seriously,” Xu said. “Where did you get this evidence? That would be some fake scholars or distorted reports or so-called testimonies,” Xu said. “Many of these people are ill-intentioned. They just want to destabilize Xinjiang.”

The attacks began when the ruling party’s Youth League publicized H&M’s statement last Wednesday. State TV called for a boycott of the Swedish retailer. Official media have criticized Nike, Adidas, Uniqlo, and Burberry for expressing concern about reports of forced labor in Xinjiang.

The Xinjiang issue & How international brands got kicked out

Xinjiang is a region in northwest China that happens to produce about a fifth of the world’s cotton. It is home to many ethnic groups, especially the Uyghurs, a Muslim minority. More than 1 million members of the Uyghur and other predominantly Muslim ethnic minorities have been confined to camps in Xinjiang in China's northwest, according to foreign governments and researchers. Authorities there are accused of imposing forced labor and coercive birth control measures, said NBC. The issue centers on the Xinjiang region of China and allegations of forced labor in the cotton industry — allegations denied by the Chinese government. Last summer, many Western brands issued statements expressing concerns about human rights in their supply chain. Some even cut ties with the region altogether.

On March 22, Britain, Canada, the European Union, and the United States announced sanctions on Chinese officials in an escalating row over the treatment of Uyghurs in Xinjiang. Not long after, screenshots from a statement posted in September 2020 by H&M citing “deep concerns” about reports of forced labor in Xinjiang, and confirming that the retailer had stopped buying cotton from growers in the region, began circulating on Chinese social media. There were calls for a boycott, and H&M products were soon missing from China’s most popular e-commerce platforms, Alibaba Group’s Tmall and JD.com. The furor was stoked by comments on the microblogging site Sina Weibo from groups like the Communist Youth League, an influential Communist Party organization. Within hours, other big Western brands like Nike and Burberry began trending for the same reason, NYT cited.

Last week, calls for the cancellation of H&M and other Western brands went out across Chinese social media as human rights campaigns collided with cotton sourcing and political gamesmanship. H&M goods have disappeared from major Chinese e-commerce platforms but on Monday the other brands still were available. The smartphone apps for H&M, Adidas, and Nike were missing Monday from major Chinese app stores, according to ABC News.

A foreign ministry spokesman warned Japan, which has been silent about Xinjiang, against joining Western governments in imposing sanctions. “We hope Japan will be prudent with its words and deeds and not follow the United States in making unwarranted attacks on China only because it is a U.S. ally," Zhao Lijian said in a response to a question at a ministry briefing. “It does not serve of the interest of Japan.”

Another government spokesman, Elijan Anayat, pointed to a statement by athletic shoe brand Skechers USA, Inc., that it failed to find evidence to support a report by an Australian think tank that one of its Chinese suppliers might use forced labor. The supplier, Dong Guan Lu Zhou Shoes, confirmed some of its workforces are Uyghurs but said they are free to leave, according to Skechers. It said the company has conducted multiple audits of the supplier since 2017 and has “no reason to believe that Lu Zhou is using any forced labor.” 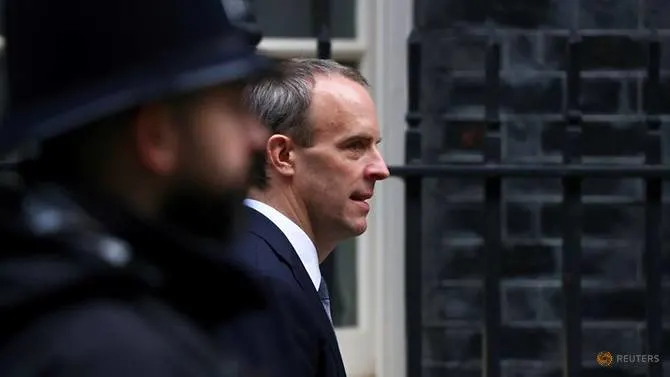 On Monday, Britain requests "urgent and unfettered" access to Xinjiang at the United Nations, in order to set light on the reports of abuses in the Chinese region.
February 23, 2021 | 17:16