The new confirmed cases raise the number of infections detected on the Diamond Princess to 218, in addition to a quarantine officer who also tested positive for the coronavirus.
VNF/AFP/Japan Times
February 13, 2020 | 13:46

Another 44 people on board a cruise ship moored off Japan's coast have tested positive for the novel coronavirus (COVID-2019), the country's health minister said Thursday (Feb 13).

Health Minister Katsunobu Kato said the 44 new cases were from another 221 new tests. They raise the number of infections detected on the Diamond Princess to 218, in addition to a quarantine officer who also tested positive for the coronavirus.

Kato said authorities now want to move elderly people off the ship if they test negative for the virus, offering to put them in government-designated lodging.

"We wish to start the operation from tomorrow or later," Kato told reporters.

Among them are 29 Japanese and 15 non-Japanese. Forty-three of the new coronavirus cases were those of passengers, while one case was that of a crew member.

The Diamond Princess has been moored off Japan since Feb 3, after it emerged that a former passenger who disembarked in Hong Kong (China) last month had tested positive for the virus now named COVID-19.

The ship was placed into quarantine shortly afterwards and authorities have asked passengers and crew to remain on board until Feb 19.

Those who have tested positive for the new virus have been taken off the ship to medical facilities, but questions have been raised about whether the quarantine on the ship is working, with dozens of new cases diagnosed almost daily.

Passengers are confined to cabins and required to wear masks and keep their distance from each other when they are allowed out for brief periods on open decks.

The total number of confirmed cases in Japan, including passengers and crew members from the ship, is now at 247. Five passengers that were sent to hospitals earlier have severe symptoms, are on artificial respirators or under intensive care, health minister Katsunobu Kato told reporters Thursday.

Elderly people made up the large majority of those newly infected with the virus, with 40 of the 44 being 70 or older. About 80 percent of the ship passengers were age 60 or over, with 215 in their 80s and 11 in their 90s, according to media./. 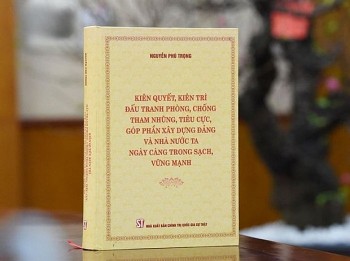 A ceremony was held in Hanoi on February 2 to release the book entitled “Resolutely, persistently fighting corruption and negative phenomena to contribute to building more transparent and stronger Party and State” by General Secretary of the Communist Party of Vietnam (CPV) Nguyen Phu Trong.
09:38 | 03/02/2023