Vietnam has been placed in the No. 6 seed group, together with Lebanon, among six seed groups for the upcoming draw of the 2022 FIFA World Cup’s third Asian qualifiers.
Rosy Huong
huongthhd@gmail.com June 20, 2021 | 07:52

With two wins and one loss in the final matches in group G of the second qualifiers in the United Arabian Emirates (UAE), Vietnam earned 2.79 more points and ranked 11th among 12 teams competing in the third qualifiers. Lebanon ranked in the 12th position, according to VietnamPlus.

The No. 1 group comprises Japan and Iran. Meanwhile, Australia and the Republic of Korea are in the No. 2 group, Saudi Arabia and the UAE in the No. 3, Iraq and China in the No. 4, and Oman and Syria in the No. 5 groups.

Permanent Vice President of the Vietnam Football Federation (VFF) Tran Quoc Tuan said the VFF will create optimal conditions for coach Park Hang-seo and his team at the third qualifiers.

He said Vietnam’s rivals will be strong teams like Japan, the Republic of Korea (RoK), Iran and Australia that had joined the World Cup final for many times.

Therefore, Vietnam needs to make thorough preparations, he stressed, adding that the VFF is working on different scenarios based on the development of the COVID-19 pandemic.

How to help the players maintain their regular exercise and fitness, and have the best performance is the most important, according to Tuan.

He said after the draw results, the VFF and the coaching staff will draw up detailed plans to make the best preparations for the upcoming matches.

VFF recognised as A Level member of AFC

The VFF said the Asian Football Confederation (AFC) on June 18 officially announced the recognition of A Level membership for the VFF related to the AFC Coaching Convention.

This is good news for the VFF following its endeavours in organising football coach training courses at all levels in line with the AFC's standards. Particularly in 2020 and 2021, despite impacts from the COVID-19 pandemic, the VFF has still organised a full range of courses as planned, thereby making a positive contribution to the training of human resources for Vietnamese football.

It was attributed partially to the efforts of Technical Director Yusuke Aachi, who have been proactive in making plans.

Adachi is known as one of the elite coaches of the AFC. He was appointed as a lecturer in the AFC professional football coach training course held in Vietnam for the first time in 2017. This is the highest certified coaching course in the AFC training system.

Being recognised as a A level membership of AFC, the VFF can organise its courses and grant certificates to the trained coaches. These certificates are valid throughout Asia.

After six months, depending on the ability and training programmes, the VFF can continue to apply for PRO membership from the AFC so that they can organise their own Pro-Diploma Coaching Courses – the highest level of coaching accreditation issued by the AFC, VietnamPlus said./. 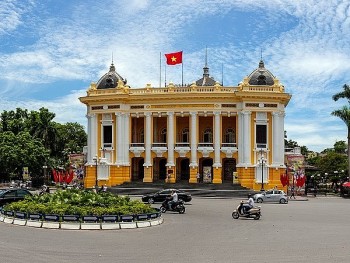 A safety tour with a combination of automatic audio guides and traditional sightseeing was launched on October 23 at the Vietnam National Museum of History.
13:28 | 24/10/2021

Hoi An ancient town in central Vietnam wins the Asia’s leading cultural city destination category at 2021 World Travel Awards (WTA), which was nicknamed by The Wall Street Journal as the Oscars of the travel industry.
October 21, 2021 | 08:07
Phiên bản di động