The European Union has summoned Russia, condemning Moscow over the decision of barring eight officials from entering the country in retaliation for sanctions.
Chau Polly
May 04, 2021 | 16:04

Diplomatic tensions have continued to rise since the start of 2021, when Moscow expelled European diplomats during an official visit by the EU’s high representative, according to Politico.

European Commission Vice President Věra Jourová hit back at Moscow after she was banned from entering Russia, telling Monday's Brussels Playbook that the regime "aims to divide us and sow mistrust" in Europe.

"There has been enough evidence for everyone to realize that Vladimir Putin’s Russia is not a standard international partner," said Jourová, one of the eight European officials targeted by the Kremlin's sanctions, implemented in retaliation for EU sanctions on Russians. She cited the Dutch reports on the 2014 MH17 plane crash in Ukraine, the 2018 Salisbury attack in the U.K. on former spy Sergei Skripal and his daughter, and the Vrbětice case, in which Czech authorities recently accused Russian intelligence agents of being behind a warehouse blast in 2014 that killed two people.

"We have to be systematic and firm," Jourová said. “I don’t think the current Kremlin’s regime will understand the language of diplomacy as long as there are no significant financial consequences.”

The EU has in turn angered Moscow by demanding that Kremlin critic Alexey Navalny should be released from prison, while blacklisting more Russian officials for human rights abuses.

Russia’s ambassador to the EU, Vladimir Chizhov, was summoned “to condemn the decision of the Russian authorities from last Friday to ban eight European Union nationals from entering the territory of the Russian Federation”, the EU Commission said in a statement.

“Ambassador Chizhov was informed of the strong rejection and firm condemnation by the EU institutions and EU member states of this decision, which was purely politically motivated and lacks any legal justification,” the EU executive added, Al Jazeera reported.

In the meeting with Chizhov, the EU representatives also recalled Russia’s expulsion of Czech diplomats and Russia’s executive order of so-called “unfriendly states”, according to the statement.

Russia’s foreign ministry said on Friday those banned included Vera Jourova, vice president for values and transparency at the executive European Commission, David Sassoli, the president of the European Parliament, and Jacques Maire, a member of the French delegation at the Council of Europe’s Parliamentary Assembly.

“The importance of diplomatic efforts to rectify the current unhealthy situation in the dialogue between Moscow and Brussels was stressed,” Chizhov said in a statement after the meeting, adding the Russian side had reaffirmed its readiness for this endeavour.

The EU imposed sanctions in March on two Russians accused of persecuting gay and lesbian people in the southern Russian region of Chechnya.

Russia on Friday barred eight officials from European Union countries from entering the country in retaliation for sanctions imposed on Russian citizens by the EU.

Russia's foreign ministry said those banned included Vera Jourova, vice president for values and transparency at the executive European Commission, David Sassoli, the president of the European parliament, and Jacques Maire, a member of the French delegation at the Council of Europe's Parliamentary Assembly.

"The European Union continues to pursue its policy of illegitimate, unilateral restrictive measures against Russian citizens and organizations," the ministry said in a statement, according to Reuters.

It accused the EU of "openly and deliberately" undermining the independence of Russia's domestic and foreign policy.

Sassoli, Commission President Ursula von der Leyen and European Council chief Charles Michel said in a joint statement they condemned Russia's "unacceptable" action in "the strongest possible terms" and said it showed Moscow had chosen a path of confrontation with the bloc.

"The EU reserves the right to take appropriate measures in response to the Russian authorities’ decision," they said

Sassoli said in a tweet that no sanctions or intimidation would stop the parliament or him defending human rights, freedom and democracy.

"Threats will not silence us. As Tolstoy wrote, there is no greatness where there is no truth," his tweet read.

Scott was among officials who said Kremlin critic Alexei Navalny had been poisoned in Russia with a Soviet-era nerve agent.

Navalny recovered from the poisoning in Germany and was detained upon his return to Russia in January, and sentenced in February to 2-1/2 years in prison for parole violations on an earlier embezzlement conviction that he says was politically motivated.

The EU imposed sanctions in March on two Russians accused of persecuting gay and lesbian people in the southern Russian region of Chechnya. The EU also imposed sanctions on four senior Russian officials close to President Vladimir Putin in March. 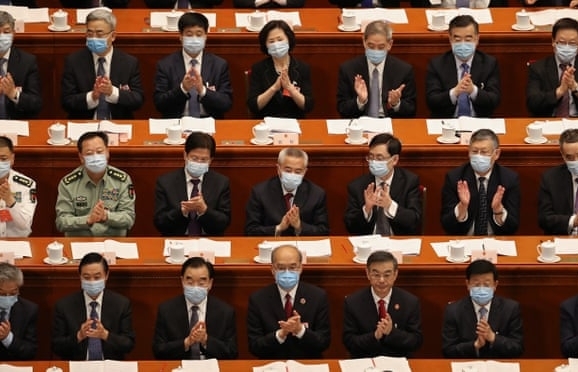 The Chinese parliament has approved plans for a bill that threatens to limit freedoms in the semi-autonomous state, with an overwhelming vote in favor of the proposal to draft the law. The move will bypass Hong Kong's internal legislature to punish acts that subvert state power.
May 28, 2020 | 16:53