Chairwoman of the Sovico Group and CEO of Vietjet Nguyen Thi Phuong Thao has become the first Vietnamese businesswoman to be presented with France’s National Order of Legion of Honour.
Malie Nguyen
Dieuhuong270198@gmail.com April 15, 2021 | 22:55

French Ambassador to Vietnam Nicolas Warnery conferred the noble order to Thao at a ceremony held on April 14, Vnexpress reported.

“The order is in recognition of Thao’s outstanding career and personalities”, said Nicolas Warnery, adding that Thao is “a friend of France".

The Ambassador reiterated Thao’s career from when she studied abroad to when she returned to Vietnam to do business.

"Now, Mrs. Thao becomes an excellent businesswoman who is often honored on prestigious rankings such as Forbes, Bloomberg", he stressed.

According to the diplomat, Thao has reaped considerable achievements in many fields such as finance, real estate, international trade, and especially aviation.

“When Vietjet Air was established, there was only 1% of Vietnamese having the chance to travel by plane. Now, 30% of its customers are people flying for the first time”, said the Ambassador. With the transportation of more than 100 million passengers, Vietjet has contributed to the trade and socio-economic development between Vietnam and countries in the world, he added.

Aviation has also served as a bridge between Thao and France. The diplomat said the female billionaire has contributed to “foster the development of aviation industry in general and Vietnam-France trade exchanges in particular".

According to Deputy Foreign Minister To Anh Dung, Thao has worked hard to “bring Vietnamese closer to the world and vice versa”. He described order presentation as a highlight in the diplomatic, cultural, and economic ties between the two countries.

For her part, Thao said she would continue to make efforts to create new values for a better Vietnam and the world.

Thao has been honored with numerous awards such as top 100 people transforming business in Asia, top 100 world’s most powerful women, top Asia's most powerful female leaders, CEO of the Year 2019 in Asia-Pacific, etc.

Earlier, Vietnamese Ambassador to France Nguyen Thiep and Member of the National Assembly Standing Committee and Chairwoman of the NA’s Committee of Social Affairs Nguyen Thuy Anh were also presented the French State’s National Order of the Legion of Honour. 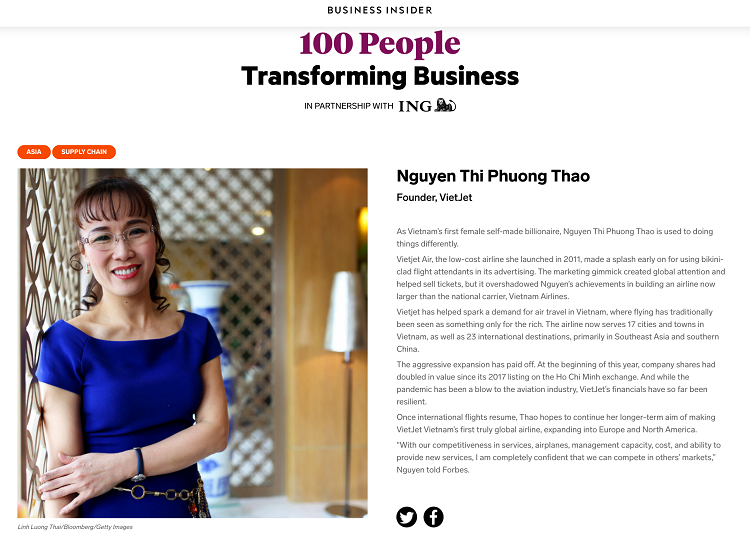 Vietjet Air CEO Nguyen Thi Phuong Thao has been the only Vietnamese to be included in the list of 100 People Transforming Business in Asia in 2020 by Business Insider.
September 13, 2020 | 16:11