During his visit to the Northeast provinces of Thailand on May 10-11, Deputy Minister of Foreign Affairs Pham Quang Hieu, chairman of the State Committee for Overseas Vietnamese Affairs presented certificates of merit and gifts to Vietnamese associations and expatriates in two provinces of Nakhon Phanom and Udon Thani.
Rosie Nguyen
ngtrang12.ftu@gmail.com May 15, 2022 | 09:12

For decades now, Thai people of Vietnamese origin in the Northeast of Thailand have always turned to their homeland, maintaining the good cultural traditions of Vietnam. They have contributed to the two resistance wars of the nation, always respected President Ho Chi Minh, believed in the policies of the Party and State.

They are always willing to participate in domestic charities, such as supporting the poor, victims of Agent Orange/dioxin, victims of natural disasters, soldiers in remote islands and border areas. They are the bridge contributing to fostering stronger relations between Vietnam and Thailand.

Deputy Minister Pham Quang Hieu said: “Currently, there are about 5.3 million Vietnamese people living in over 130 countries around the world. However, the community in Thailand is special.

It can be said that this is a community rich in revolutionary traditions, with solidarity and always towards the homeland. We are always grateful and acknowledge the contributions of people from the most difficult times. From the time when we were still fighting for independence, as well as in the future construction of the country, we received contributions and support from people.

The Deputy Minister thanked the valuable contribution of overseas Vietnamese in Thailand not only to Vietnam but also to Thailand - their second homeland.

They have donated to support the prevention of the Covid-19 pandemic in Vietnam and Thailand, and the people in the Central region who have encountered floods. The Deputy Minister suggested that people continue to strengthen the spirit of mutual support.

They have well met the needs of the people in preserving the national culture, and teaching and learning Vietnamese. They are also appreciated by the Thai government, and at the same time contribute to tightening the friendship between the two countries.

He hoped they would continue to maintain historical values, encourage children to study Vietnamese, and preserve the cultural identity.

On behalf of the Ministry of Foreign Affairs, the Deputy Minister also presented gifts to overseas Vietnamese with meritorious services to the country.

He thanked the teachers for their efforts in spreading and teaching Vietnamese. The Deputy Minister said that the efforts of the teachers contributed to the homeland and the country.

The Deputy Minister hoped that Vietnamese pagodas would continue to organize cultural activities of the community, strengthening the image of Vietnamese culture, country, and people in the host country.

He also hoped they continued to encourage the younger generation to learn Vietnamese, increase their affection for their homeland, and preserve Vietnamese for future generations. 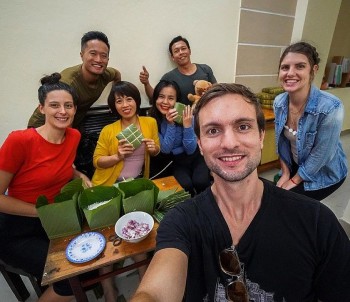