This unique attraction is Vietnam's biggest cathedral of the Cao Dai religion, also the main attraction in Tay Ninh and is considered as one of the biggest religious sanctuaries in the world.
Zoey Nguyễn
[email protected] April 17, 2022 | 10:27

This unique attraction is Vietnam's biggest cathedral of the Cao Dai religion, also the main attraction in Tay Ninh and is considered one of the biggest religious sanctuaries in the world.

Adorned with eye-catching colors, Cao Dai Holy See will attract you at first sight with its unique architecture.

The strong vibrant colors, which are perfect for snapping travel photos, make the destination one of the tourists' favorite attractions in Tay Ninh.

Cao Dai draws upon ethical precepts from Confucianism, occult practices from Taoism, theories of karma and rebirth from Buddhism, and a hierarchical organization (including a pope) from Roman Catholicism. Its pantheon of saints includes such diverse figures as the Buddha, Confucius, Jesus Chirst, Muḥammad, Pericles, Julius Caesar, Joan of Arc, Victor Hugo, and Sun Yat-sen.

The religion's organization is patterned after that of Roman Catholicism, with a pope, cardinals, and archbishops. Worship involves elaborate rituals and festivals.

Caodaism architectural designs can be seen in both the exterior and interior architecture of the Temple with meticulous motifs.

The windows of the Great Temple are decorated by lotus patterns surrounding the divine eye in the middle of equilateral triangle.

With an area of about 40km², Tay Ninh Cao Dai Temple includes nearly 100 religious architectural works such as the Great Temple, Bao An Tu (Mother of Buddha Temple), the towers, etc, and 12 three-door gates, of which, the biggest gate is Chanh Mon, 11 remain gates is numbered from 1 to 12 (except number 5).

The most interesting work in this complex is the Great Temple built according to the architectural requirements of the Caodaism religion. The construction is a harmonious fusion of Asian and European styles, with domes and embellishments exemplifying the spirit of the religion.

The Great Temple has an actual size of 97.5m long and 22m wide with the shape of dragon horse kowtowing.

Bat Quai (Pa kua) Pavilion located at the end of the Great Temple has 8 dragon pillars arranged in the pa kua shape. In the middle, there is 3.3m-diametre Can Khon (Qian Kun) Ball with Divine Eye - symbol of Caodaism religion.

The two sides of the Great Temple are the bell tower (in the left) called Bach Ngoc Chung Dai and the drum tower (in the right) called Loi Am Co Dai. The both two towers are 27m high and have 6 floors.

When visiting Cao Dai temple, you must follow dressing rules such as only long trousers and sleeved tops are allowed. Also, taking photos is restricted in certain areas so look out for the signs or the instructions from the staff. 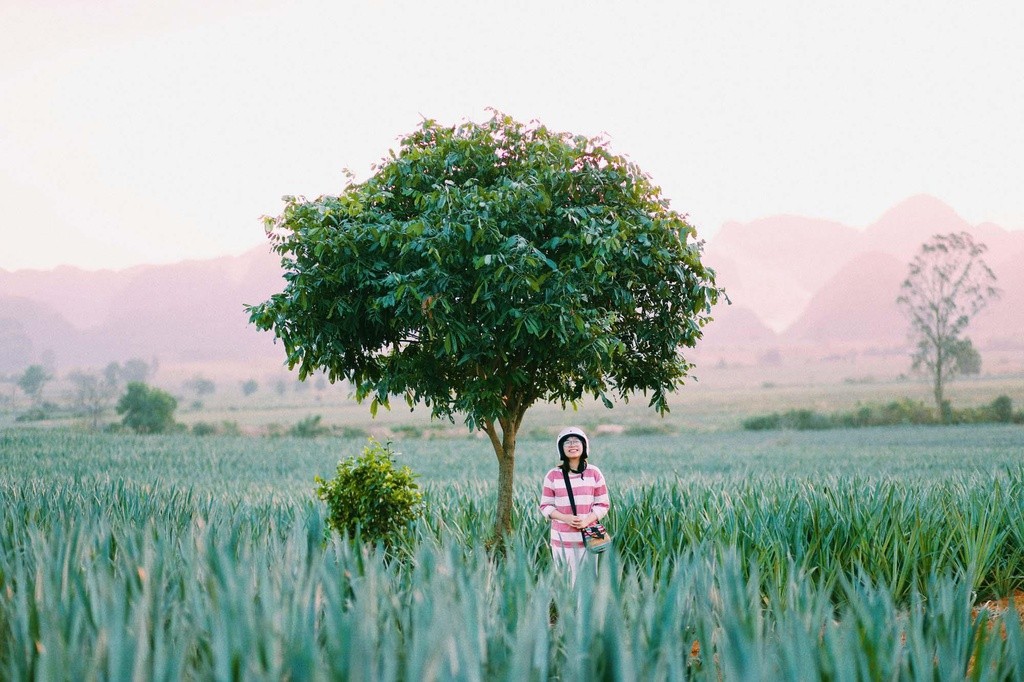 Ninh Binh is not only famous as a tourist destination like Bai Dinh and Trang An, but it also attracts a lot of young people thanks to the Tam Diep pineapple hill.
February 09, 2023 | 09:38

Banh Cuon is the next representative to bring Vietnam into the world culinary field.
February 09, 2023 | 07:48

Hue is famous for its unique dishes such as Hue beef vermicelli, mussel rice, rice dumpling cake, or salted coffee. Here are 5 dishes that visitors must try if they have the opportunity to come here.
February 03, 2023 | 12:21
Phiên bản di động