Following are the opinions of Lawyer Quach Thanh Vinh of The Vietnam Association for Victims of Agent Orange after the Evry Court rejected Tran To Nga’s requests on her lawsuit against U.S. chemical companies to seek justice for Agent Orange victims.

- Do you know about Tran To Nga’s journey to demand justice for Agent Orange victims?

The Vietnam Association for Victims of Agent Orange has been accompanying and supporting Tran To Nga as she files lawsuits against U.S. chemical companies. I know and have also met Nga since she began preparing for the lawsuit in 2009 until the Evry Court approved her petition for the case, through five years with 19 sessions. William Bourdon’s legal firm had worked closely with the association. We sincerely believed in France’s legal system, in the case’s just causes, and the ability of Nga’s lawyers. However, the Evry Court rejected the case on May 10, 2021.

- As a lawyer, what is your opinion about the action of the Evry Court?
In 2005, the US court rejected the petition of the group protecting the right of Agent Orange / Dioxide victims – The Vietnam Association for Victims of Agent Orange. The US court reasoned that Vietnam’s side did not provide enough scientific evidence to prove the connection between the victims’ diseases and Dioxin. They said that the petition was not based on international law and that chemical companies were merely commissioned by the U.S. government, which can exercise state immunity. Drawing lessons from the previous petition, Nga, the Bourdon Lawfirm, and the association had been discussing extensively and prepared the paper works very carefully. However, the Evry Court rejected the case based on civil procedures. The court said it did not have jurisdiction to judge the actions of a foreign country with sovereignty rights under the country’s wartime “defensive policies”.

The Evry Court’s explanation about its jurisdiction is cited from decisions made a long time ago. The court has applied a very outdated definition of the principle of immunity, contrary to modern principles of international and national law.

In addition, the Evry Court was not right when they judged that the U.S. companies had sufficient grounds to exercise immunity. The U.S. government at the time did not impose any requirements to make products with high levels of dioxin like Agent Orange. Further, when they accepted the U.S. government’s order, they were the ones who understood the technical issues the most. They understood whether their products had been made correctly and what safety procedures should have been applied. And yet, they provided these chemicals to the U.S. military to use during the Vietnam War. They were accomplices in this crime. When the Evry Court announced its decision, we were so disappointed. This was a roundabout decision. The court had seen the wrongdoings and injustice, but still met the demands of these companies.

The Evry Court’s rejection of Nga’s lawsuit showed that the court has taken away its own jurisdiction and power to handle lawsuits that involve French citizens suffering damages inflicted by foreign factors, whether foreign individuals, natural persons or legal entities. The Evry Court has not performed its duties to protect French citizens, because Tran To Nga is a French citizen.

- How do you evaluate the challenges facing Tran To Nga in this legal fight?

There are other factors relating to the decision of the Evry Court, particularly the relationships between the countries involved. This goes beyond the lawsuit and is not simply a legal matter.

With their decision, the Evry Court has also brought more challenges to Nga. If she could not file the lawsuit in France, it would be difficult for her to do it in other countries. To file a lawsuit in countries with a legal system like France, the plaintiff must be a citizen of that country to be accepted by the court. In addition, lawsuits are very expensive. People need to be financially viable even when lawsuits can be pursued. Nga herself is facing financial difficulties.

- In the coming time, what do you and the association plan to do to support Tran To Nga and Agent Orange victims?

After the Evry Court announced its decision to reject the petition, Nga and her lawyers have published a press release about the court’s judgment and reaffirmed that they would take the case to the Court of Appeal. On May 12, The Vietnam Association for Victims of Agent Orange declared that they fully supported Nga’s lawsuit and her decision to go to the Court of Appeal. The association has released its statement. In addition, the association has been calling for The Vietnam Associations for victims of Agent Orange at different levels, as well as individuals and organizations in Vietnam and abroad, to voice their support for Nga’s lawsuit and provide mental and, where possible, physical support to Agent Orange victims. I will do my best to support the association’s works to help Tran To Nga and victims of Agent Orange.

Victims of Agent Orange are the poorest amongst the poor, the most vulnerable amongst the vulnerable. Their pain is the pain of Vietnam and all mankind. We will continue to wait and believe in justice. 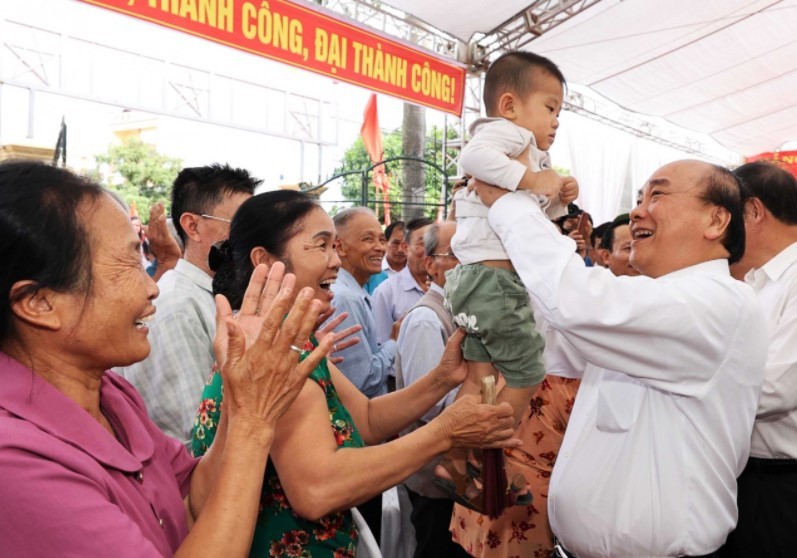 Part 1: Humanity- The Center Of Every Policy In Vietnam

Protecting and promoting human rights is the consistent policy of Vietnam. This policy is reflected throughout the Constitution, laws and socio-economic development strategies and plans as well as the respect and implementation of international obligations and commitments in the field of human rights. Among them, there are recommendations under the Universal Periodic Review (UPR) Mechanism that Vietnam has accepted at the third cycle in 2019.
December 09, 2021 | 08:02