Not only famous for their natural beauty, but these rivers are also an important part of the cultural and spiritual life of many people living in these countries.
Charlotte Pho
December 04, 2021 | 21:36

A river is a natural flowing watercourse, usually freshwater, flowing towards an ocean, sea, lake, or another river. In some cases, a river flows into the ground and becomes dry at the end of its course without reaching another body of water. Small rivers can be referred to using names such as stream, creek, brook, rivulet, and rill. Flowing through mountains and valleys, and villages, and cities – rivers have been attracting settlers to build the civilizations around them for centuries. Here are the most stunning and alluring rivers in the world that you should visit once in your life.

The Yangtze River (or, "Changjiang" in Chinese, literally, the "long river"), is the longest river in China, running 6,300 kilometers (3915 miles). It is also the third-longest river in the world. Its basin, extending for some 2,000 miles from west to east and for more than 600 miles from north to south, drains a huge area in South China. The Yangtze also carries more water than any other river in China.

The Yangtze is open to navigation all year-round. The picture to the left features one of the so-called "Three Gorges," dangerous to navigate because of its currents and shallows, but of incredible beauty.

The Yangtze flows through a wide array of ecosystems and is habitat to several endemic and threatened species including the Chinese alligator, the narrow-ridged finless porpoise, and the Yangtze sturgeon, but also was the home of the extinct Yangtze river dolphin (or baiji) and Chinese paddlefish. In recent years, the river has suffered from industrial pollution, plastic pollution, agricultural runoff, siltation, and loss of wetland and lakes, which exacerbates seasonal flooding. Some sections of the river are now protected as nature reserves. A stretch of the upstream Yangtze flowing through deep gorges in western Yunnan is part of the Three Parallel Rivers of Yunnan Protected Areas, a UNESCO World Heritage Site.

Caño Cristales, Meta Department, Colombia. Also known as the River of Five Colors, Caño Cristales is the most spectacular natural wonder in the country. Found in the mountain range of Serranía de la Macarena, the river mesmerizes with amazing colors: vivacious yellow, green, blue, black, and red shades quiver from the bottom.

The Liquid Rainbow is caused by a unique phenomena: a red plant – Macarenia clavigera – growing in the riverbed. Other colors come from black rocks, green algae, blue water, and yellow sand, producing an iridescent effect. The river also features waterfalls, pools, and caverns, making it even more dramatic. Furthermore – there are no fish or other creatures, so visitors can enjoy uninterrupted bathing in Caño Cristales.

Caño Cristales river has a wide variety of aquatic plants. The water of the river is extremely clear due to the lack of nutrients and small particles. Almost unique is the bright red-pink coloration of the riverbed after the rainy period at the end of June - November. This color is caused by great quantities of endemic plant species Macarenia clavígera. This plant is found in some more local rivers, such as the Caño Siete Machos. These red plants adhere tightly to rocks in places where the river has a faster current.

Every river retains the memory of its route to the sea. This is no less true for the Cahabón River, which wends its way down Guatemala’s high central plateau over a distance of 121 miles. The river forges a path through the lovely department of Alta Verapaz. The most striking section of its journey is the iconic intense turquoise of the pools of Semuc Champey. The river imposes its majestic presence on the land where it was born.

Visitors encountering the pools of Semuc Champey are moved to new emotional heights by the sumptuous environment. At this point in its meanderings, the river is cloistered by high mountains. Before it is channeled into a series of tranquil pools, the water roars toward the underworld, disappears, and then hurries into the bowels of the earth, to emerge perhaps a thousand feet ahead and reclaim its sunlit course.

The local geology, which features karst formations (a pitted landscape of carbonate deposits and dissolved rocks), creates mysterious netherworlds beneath the surface. The region contains caves that run several miles into the earth where the constant drumming of millions of water droplets has sculpted stalactites and mirror-image stalagmites. Visitors now have access to this nocturnal world. Those who have traveled to the innards of the earth find a harmony reminiscent of an impressionist painting as they experience the liquid sensation evoked by life lived to the rhythm of water in the depths of the earth, according to Panorama Of the Americas.

Perfume River spans approximately 80 kilometres in length, flowing from Truong Son Mountain through Hue City Centre and Bang Lang Fork. The river was given its name over 100 years ago, due to the scent of flowers that dropped in the water from upriver orchards. As the strong floral scent was carried through the river during autumnal months, it resulted in locals naming it as Perfume River.

Today, it may not smell as fragrant due to modernization and the increasing number of riverboats but it’s still one of the most popular landmarks in Hue. The waterfront gets very lively in the evening. Local youths often flock to the park to enjoy breathtaking sunset views of the Perfume River. The Trang Tien Bridge (Cau Truong Tien) also becomes illuminated with colorful LED lights, resulting in an impressive sight.

As most of Hue’s iconic attractions, temples, and local villages are set along the Perfume River, there are numerous tour operators offering cruises and paddleboat rentals at various price points. A popular option is the Perfume River dinner cruise, where you depart from Huong Pier on a traditional dragon boat.

After several minutes, the boat stops in front of Hue Imperial City, where you get to explore iconic Hue landmarks such as Thien Mu Pagoda, Hon Chen Temple, and the tomb of Emperor Minh Mang.

The cruise continues with an authentic Vietnamese dinner, which includes dishes such as bun bo hue (hue beef noodle soup), banh khoai (Vietnamese crepe), and banh it ram (fried sticky rice dumplings). You also get to enjoy live folk music and songs before the boat returns to the pier.

The Rapa River (also called Rapaätno) flows through the Sarek National Park, winding through magnificent mountain ranges and narrow valleys, in north Norrland, in Norrbotten County, Sweden. A tributary of the Lesser Lule River, Rapa stretches 75 km from its source up in the glaciers of Sarektjåkkå to the mouth of Lake Laitaure, flowing through a 35 km long Rapa Valley or Rapadalen. The Rapa valley is the artery of Sarek. It is a splendid piece of unspoiled wilderness with dense thickets of mountain birch, osier, and herbaceous plants. The flora is poor in most of the park, but the animal life in the valleys is rich. If you are lucky you can see bear, wolverine, lynx, or one of the unusually large elks.

The Rapaätno river has an enormous flow and carries green glacial water from about thirty glaciers. It runs down the Rapa Valley as far as Lake Laitaure and then rejoins the Lesser Lule River river which eventually forms the Lule River river at the confluence with the Lule älv. At the mouth of Lake Laitaure, the Rapa River forms the Laitaure Delta. The Rapa delta is considered to be the most beautiful river delta in Scandinavia.

The Congo River is a long, arcing river with a basin that spans nine countries in West-Central Africa. This extensive body of water provides food, water, medicine, and transport to about 75 million people in the surrounding basin, according to Yale University's Global Forest Atlas.

The Congo River zigzags across the equator twice as it flows from eastern Africa, through the Congo rainforest, all the way to the Atlantic Ocean, according to Mongabay, a nonprofit environmental science, and conservation news site. From its tributaries to where it meets the Atlantic Ocean, the massive river includes rapids, wetlands, floodplains, lakes, and swamps.

In addition, the Congo River is the world's deepest recorded river at 720 feet (220 meters) deep in parts — too deep for light to penetrate, The New York Times reported. It's also the second-longest river in Africa, spanning a length of approximately 2,920 miles (4,700 kilometers), according to Phys.org. (Africa's Nile River is the longest river in the world at 4,135 miles or 6,650 km long.) That makes the Congo River the ninth-longest in the world. 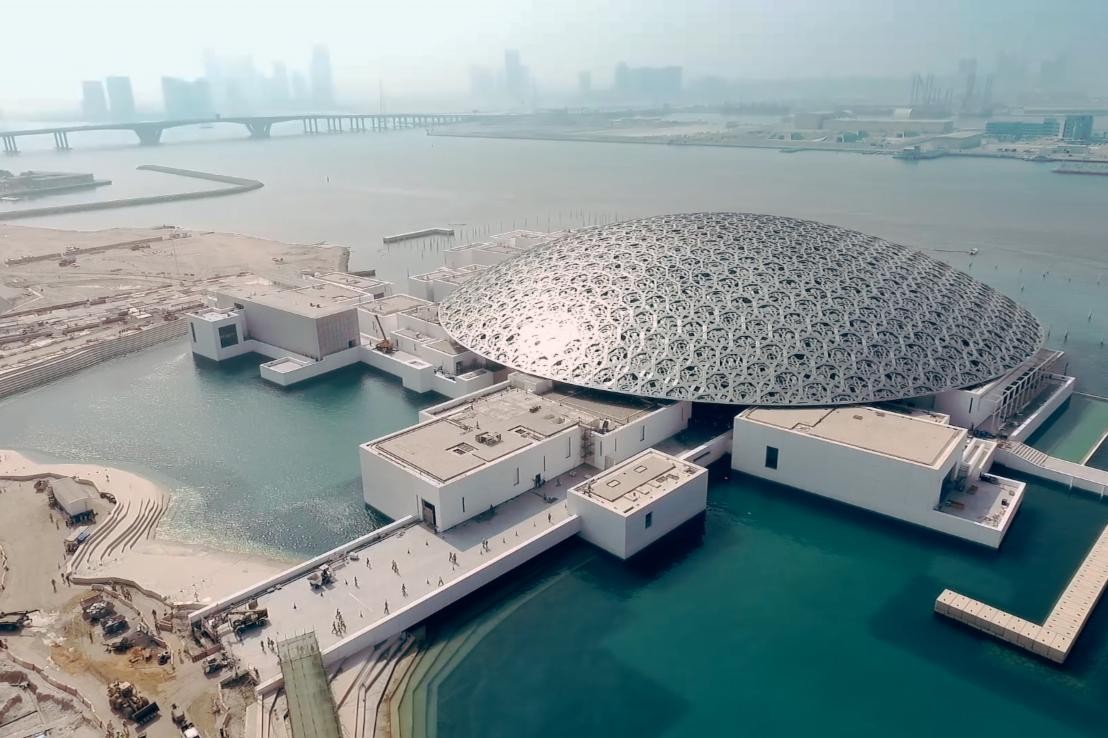 With a long history of culture and architecture, Abu Dhabi has left many extraordinary architectural masterpieces to the world, and here are six of them that you can visit.
January 06, 2022 | 08:05

The Most Colorful Mountains In The World

When people think of mountains, they are only green and gray of the trees and rocks. But some mountains in the world have vibrant and bright colors like rainbows.
December 12, 2021 | 06:38

With beautiful natural scenes and favorite tourist destinations, the U.K has some of the best and most wonderful driving roads that you can enjoy rolling on no matter what the weather and time is.
January 13, 2022 | 08:11
Phiên bản di động