On June 13, air medical rescue of Military Hospital 175 was called to the hospital on Song Tu Tay island (Spratly island district ) to rescue a fisherman who had a stroke.

Dr. Tran Thi Hai Anh of the Intensive Care Unit of Military Hospital 175 joined this air ambulance team for the first time.Talking about her first fisherman rescue flight, she has many intense emotions, mainly nervousness and anxiety as well as pride and responsibility.

The young doctor recounted that the hospital received information that the fisherman were fishing for squid in the area near Song Tu Tay island, when they showed signs of fatigue and unconsciousness, and was taken to the hospital.

"Patients are identified at risk of complicated development, progressive respiratory failure , critical condition. I volunteered to participate in the emergency, uncertain if the leader would agree. Once he did , the honor was unspeakable," said Dr. Two English.

"I was also worried, not knowing if I could handle the task or not, or whether the emergency conditions harsh… The commander and his colleagues were encouraging me a lot. stepping on the helicopter, those worries faded," Hai Anh shared .

The young female doctor also said that she has long admired the doctors and nurses involved in air ambulance because that is not only the doctor's mission to the patient, but also contributes to strengthening the trust of the doctors, medical staff, soldiers and people who are living and protecting the sacred sea and islands of the Fatherland.

Those were extremely fierce days, she recalls. Working and living conditions were difficult in the context of the Covid-19 epidemic.

“From seeing the number of cases helped increase to the peak of August - September 2021, the number of patients is overloaded, the number of deaths increases. I am helpless to see the patient go. Sadness, confusion, stress... are all I can feel. But I told myself that I had to get up and fight for other patients," Hai Anh said.

She added: “But I also remember the successful treatment of a patient infected with Covid-19 after nearly 2 months. It is impossible to describe the feeling when seeing the patient being weaned off the machine, removed the endotracheal tube and discharged from the hospital… They make me think about the patient's vitality and energy; the value of life and also my value and responsibility as a doctor".

Joining the emergency team on Song Tu Tay Island is not only an unforgettable experience, but also an opportunity, as she says, to fulfill her mission and to overcome herself.

Air ambulance work was pioneered by Military Hospital 175. Participating in this emergency team requires members to have solid expertise, good health, and an extremely high sense of responsibility to monitor the patient's situation during the flight.

Colonel, doctor Dinh An, Deputy Head of the Intensive Care Unit at Military Hospital 175, said that Doctor Hai Anh's spirit, bravery and professional capacity were remarkable. The department always motivates the young doctors to follow the tradition of the hospital, the department, to overcome all challenges, dare to accept difficult and complicated jobs, to constantly improve in the professional capacity. 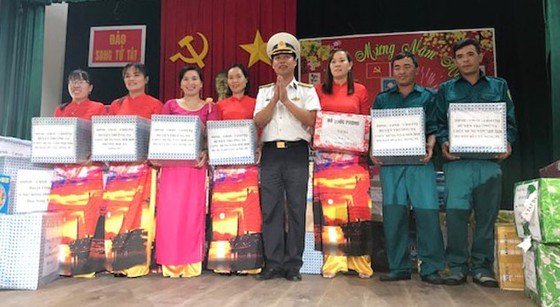 A working delegation from Brigade 146, High Command of Naval Zone 4, and reporters visited and presented gifts to soldiers and residents on Song Tu Tay island, Truong Sa district, the central province of Khanh Hoa on December 24, ahead of the upcoming Lunar New Year (Tet) festival.
December 25, 2019 | 21:18