Vietnam Finishes Second in Their First Match of 2021 Tank Biathlon

The Vietnamese tank crew No.1, consisting of tank commander Vu Ba Trong, gunner Le Quang Hiep and driver Do Quoc Tuan, performed well, hit all 5 targets and finished the competition with a result of 24 minutes 58 seconds and a top speed of 65 km/h.

With this result, Vietnam's tank team No. 1 finished second. The Mongolian team finished first with a result of 24 minutes 4 seconds and a top speed of 70 km/h, while the Venezuelan and Syrian teams completed the test after 31 minutes and 35 minutes 22 seconds respectively.

Tank Biathlon is the main content and attracts the most attention at the Army Games, an international military sports festival held every year by Russia. The tank race emerged from the international competition in Moscow in 2013 with only 4 participating teams, then renamed the tank biathlon from 2014.

The organizers of the Army Games 2021 announced that teams from 19 countries and territories will take part in this year’s tank biathlon competition, in which 11 teams participate in Group 1, including hosts Russia, Azerbaijan, Belarus, Kazakhstan, Mongolia, Serbia, Syria, China, Uzbekistan, Venezuela and Vietnam.

After qualification, the three worst performing teams have to leave the tournament and the remaining 8 teams advance to the semi-finals.

The Russian team has the advantage of the homeowner and the ability to master the falm, allowing the water car to hit all 5 targets, reaching a maximum speed of 81 km/h on the run and completing the fastest section.

The Chinese team seemed to have trouble with the first post barrel, but still hit all three targeted beers in the tank killing.The Uzbekan team also lowered 3/5 targets, finishes with results 24 minutes 16 seconds, a maximum speed of 75 km/h.

In the first match of Table 2 qualifiers, Myanmar team plays with Laos, Kyrgyzstan and Mali. Myanmar is the earliest completion team with the result of 28 minutes 58 seconds, reaching a maximum speed of 70 km/h and hit 2/5 targets.

The Kyrgyz team had trouble and had to switch to back-up vehicles, affecting the competition results. Kyrgyzstan finished second with a result of 32 minutes 12 seconds, a speed of 70 km/h and lowered 1/5 of the target.

The International Army Games were first held in 2015 and is an annual Russian military sports event organized by the Ministry of Defense of Russia.

The 2021 Army Games is scheduled for Aug. 22 – Sep. 4 with 34 contests and 260 teams from 45 countries. The latest event marks the fourth consecutive year that Vietnam has taken part in the competition. At this year's games, all teams uses Russian-supplied T-72B3 tanks, except China uses self-made Type-96 tanks and Belarus uses T-72 tanks upgraded by Russian companies. 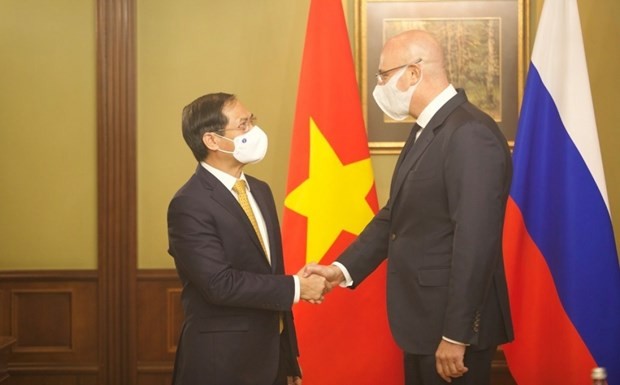 Lena Pillars is a geological formation and nature park of the same name located on the banks of the Lena River in Yakutia, with big stone pillars that make this place a tourism attraction in Russia.
September 28, 2021 | 08:30