Vietnam’s export turnover of aquatic products in March has been estimated at around $640 million, bringing the total for the first quarter of the year to $1.64 billion, up 3 percent year-on-year.
Malie Nguyen
[email protected] April 04, 2021 | 08:44

According to the Vietnam Association of Seafood Exporters and Producers (VASEP), the global shortage of containers began to improve in mid-March and China has loosened its pandemic control measures over imported goods, thus boosting Vietnam’s aquatic exports.

After increasing by 16 percent in January, shrimp exports were down 10 percent in February but bounced back to grow 10 percent in March. Total export turnover is estimated at $646 million in the first quarter, up nearly 3 percent year-on-year, according to Vietnamplus.

Tra fish exports, meanwhile, enjoyed a growth of 11 percent in March after falling 5.5 percent during January-February. Vietnam earned a total of $336 million from exporting Tra fish in the first quarter, a slight rise of 0.6 percent year-on-year.

Thanks to preferences in the EU-Vietnam Free Trade Agreement, the export of squid and octopus to the EU market is also recovering, pushing up export value by 8 percent in March.

VASEP predicts that aquatic exports will not recover strongly in April, with growth reaching only 10 percent to $680 million.

Vietnam’s aquatic product exports are expected to rake in $9.4 billion this year, a surge from $8.5 billion in 2020, driven by a strong rebound in demand of export markets and the support of free trade agreements, according to the Vietnam Association of Seafood Producers and Exporters (VASEP).

Stable supply will be an advantage for Vietnamese shrimp exporters to expand their market shares in export markets.

The prices of exported shrimps are also forecast to rise slightly by 5 percent to an average of $9.6 per kg, according to an FPTS report.

Meanwhile, experts from BIDV Securities Company said that it is difficult for Vietnam’s shrimp sector to enjoy high export growth in 2021, as the production of competitive countries such as India and Ecuador begins strong recovery, especially when the two countries’ shrimp prices are 10-15 percent lower than that of Vietnam.

However, the shipment of shrimps to the EU, which accounts for 21 percent of Vietnam’s total shrimp export turnover, is expected to be supported by the EU-Vietnam Free Trade Agreement (EVFTA).

The tariffs imposed on frozen shrimps were slashed to zero percent immediately after the EVFTA became effective on August 1, 2020, while those on processed shrimps will reduce to zero percent from January 1, 2027.

The output of Vietnam’s Tra fish is also forecast to maintain an uptrend this year.

FPTS expects that the export will bounce back thanks to the increasing demand of Vietnam’s main importers such as China, the US, and the EU.

Vietnamese businesses’ efforts to focus on value-added processed products which meet all requirements on food safety and origin traceability of products will be paid off, with the export value of processed Tra fish to surge in 2021. 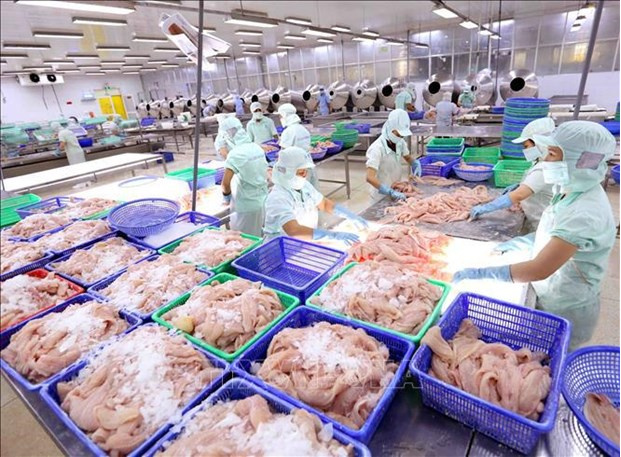 Vietnamese aquatic exports reach US$2.39 billion in first 4 months of 2021

According to the Ministry of Agriculture and Rural Development, aquatic exports of Vietnam hit an impressive of US$2.39 billion during the opening of the first 4 months of 2021, representing an increase of 6.1% compared to the same period last year.
May 17, 2021 | 10:35