Cham temples in central Vietnam are proof of the cultural connections between Vietnam and India, says Ambassador of India to Vietnam.

The Embassy of India & Swami Vivekananda Culture Centre (SVCC) in Hanoi held a webinar on “Indian Temple Architecture and Cham Temples” on Feb. 25.

In his opening speech, Pranay Verma, Ambassador of India to Vietnam, highlighted the role of architecture as a cultural bridge to connect the Vietnamese and Indian people.

"In Vietnam, the imprints of Indian architecture are quite visible in the temples in the central and southern provinces of the country, which shows our age-old civilizational and cultural connection," he said.

Cham (Champa) temples in central Vietnam are proof of the two countries' relations despite their geographical distance.

The ambassador is pleased that Indian archaeological experts have supported the conservation works of some Cham temple blocks in Vietnam, namely the UNESCO-recognized My Son Sanctuary.

"Some of the findings that Indian archaeologists have made in My Son are extremely significant as it shows our rich cultural interactions," the ambassador said.

Ambassador Pranay Verma believes that temple architecture is a great way to study India and Vietnam's cultural interactions and connections.

Notably, the Champa civilization, which was greatly influenced by Indian culture, has become an inseparable party of the Vietnamese community and left a considerable heritage to Vietnamese culture.

65 identifiable Cham towers have been found in the central and southern part of Vietnam so far, the oldest one dated back to the 7th century, while the youngest was built in the 17th century.

Cham towers are located from Thua Thien Hue to Binh Dinh but mostly appear in the old capitals of Cham people, such as Quang Nam, Binh Dinh, and Ninh Thuan provinces.

By analyzing Cham towers' structure, special architectural features, and icons, Dr Le Dinh Phung concluded that among Vietnamese civilizations, the Cham had the most influence from India, which continued throughout the history of Cham culture.

However, during its development process, Cham took up several features from other cultures, such as Khmer and Java. As a result, Cham towers left in Vietnam show the signature of Indian architecture and religion yet have their own speciality. 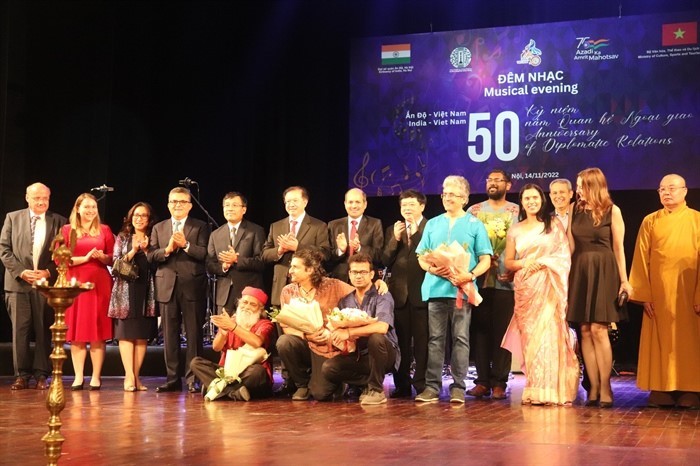 On the occasion of 50 years anniversary of Vietnam - India diplomatic relation establishment, Indian Embassy in Hanoi, Vietnam Ministry of Culture, Sport and Tourism together organized a Musical Night performed by Ocean Band who is a leading and famous musical band in India over 30 decades.
November 15, 2022 | 09:51

The Norwegian Embassy and Innovation Norway, along with the Norwegian energy companies in Vietnam stand ready to contribute to unlocking the full potential of wind power in Vietnam, Ambassador of Norway to Vietnam Hilde Solbakken said at Vietnam Wind Power 2022 in Hanoi on December 1.
December 02, 2022 | 08:30
Phiên bản di động