Marking President Ho Chi Minh’s 130th birth anniversary this year, VOV.VN takes you to a tour of the late president’s house where he lived from 1901 to 1906.

Located in Kim Lien commune of Nam Dan district, Nghe An province, in central Vietnam, Sen Village is the place where President Ho Chi Minh spent his childhood. In the village, there is a 5-room wooden house with thatched roofs owned by Nguyen Sinh Sac, President Ho’s father. This is the house where President Ho lived from 1901 to 1906.

The signpost reads: The house of Phó bảng Nguyen Sinh Sac, the father of President Ho Chi Minh. (Phó bảng was an academic degree granted to those who passed exams under the Nguyen Dynasty from 1829 to 1919).

Proud to have the first person accredited by the Hue royal court, Sen villagers erected a house for Nguyen Sinh Sac to recognize his contribution to the locality. The house was built on a total area of approximately 2,500 m2, including a garden.

After the house was completed, Nguyen Sinh Sac and some of his relatives, including Nguyen Sinh Cung, the former name of President Ho Chi Minh during his childhood, moved to live in.

. Pictured is the intricately patterned tea set which was used by Nguyen Sinh Sac to receive guests, including national patriots. After more than a century, the set há been kept intact.

This is the kitchen with simple wooden cupboards.

All the artifacts have been kept till today

The house was hidden behind big trees

Bamboo trees were planted on the path leading to the house

The house is part of the Kim Lien Relic Complex which has been recognized as the national special heritage site. It displays many valuable artifacts associated with President Ho’s childhood and his two visits during his lifetime. In the picture, this is the car that took President Ho to Sen village for the first visit on June 16, 1957.

This is the silk outfit President Ho was wearing during his first visit to his hometown in June 1957.

The white khaki costume and a pair of rubber sandals were worn when President Ho visited his home country for the second time in 1961.

On display are a microphone, an ashtray, and a cup set President Ho used when he visited Dong Hieu farm in Thai Hoa town of Nghe An province in 1961.

This is the latest artifact which was awarded to the Kim Lien Relic Complex in January 2020. Hearing of President Ho’s death, Nguyen Cong Phi, a worker of Vinh mechanical factory, portrayed the late President on the wreckage of US aircraft shot down by soldiers and people of Vinh city. The portrait was used in President Ho’s memorial service in Nghe An province from September 4-9, 1969. 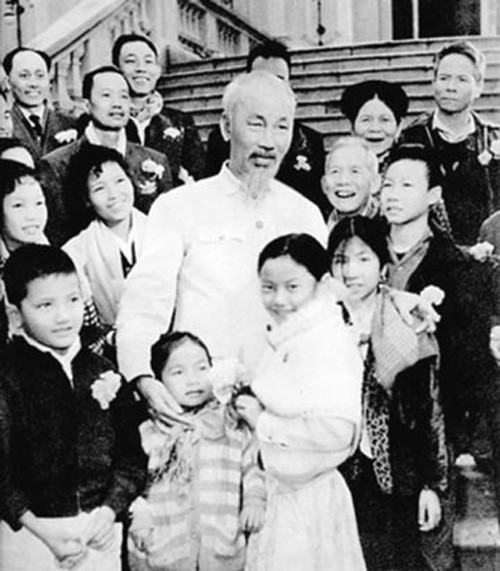 President Ho Chi Minh has always paid special attention to overseas Vietnamese and in return for that love, many people have given him very precious memorabilia.
October 24, 2022 | 07:08