Wearing a red sports shirt with a yellow star print, Bernat (29, Spanish) went to Nguyen Hue pedestrian street (District 1) to cheer for Vietnamese players in the match against Malaysia U23.
Rosie Nguyen
ngtrang12.ftu@gmail.com May 21, 2022 | 00:00

During his trip to Vietnam 3 years ago, Bernat went to Ho Chi Minh City to watch the 30th SEA Games final round of U22 Vietnam - U22 Indonesia.

“At that time, the Vietnamese team won with a score of 3-0. I still remember joining people on the streets celebrating. In Barcelona, when the home team wins, people also flock to the central areas, carrying national flags, drums and singing to spread joy," Bernat said.

On the evening of May 19, Vietnam U23 team met Malaysia U23 in the 31st SEA Games semi-final match at Viet Tri Stadium (Phu Tho). Before kick-off time, thousands of fans flocked to Nguyen Hue pedestrian street (District 1, Ho Chi Minh City) to cheer for the players.

They brought banners, national flags, trumpets, and trumpets to strengthen the fighting spirit of the players, making the atmosphere more vibrant and energetic.

Foreigners in Vietnam are excited

With the bustling atmosphere of the fans, Gauthier Daridon (22, French) also showed his love for the king sport in Vietnam.

He learned about the match information through social networks. He came here early to choose a nice location, convenient to watch the football match.

“I have never watched a match of the Vietnamese team. This is my first time watching football in a place like this. I was quite surprised by the bustling atmosphere and the cheering spirit of the Vietnamese people. Everyone is excited and proud of the home team, which makes me excited too,” he said.

Similar to Gauthier Daridon, Marta (27) and Laia (24), from Spain, were also delighted by the passionate spirit of the Vietnamese fans.

They came to Vietnam about 2 weeks ago to get new jobs. After work, they go to the pedestrian street to enjoy the vibrant and bustling atmosphere.

“I am impressed with the way Vietnamese people support football, friendly and civilized. When they saw us, people raised their hands in greeting and handed out banners. Hopefully, Vietnam will win tickets to the final because the players have made great efforts," said Marta.

Cheering for the Vietnamese team

Present at Nguyen Hue pedestrian street (District 1) from 6 p.m., Minh Huy (24) and his best friend found a nice place to watch football. This is the second time he cheered for the U23 Vietnam team with everyone here.

According to Huy, the football match was much more attractive thanks to the vibrant cheering atmosphere of the crowd on the pedestrian street.

In order not to miss beautiful moments, Minh Huy has a raincoat and shoe bag ready. He said he could not watch the first 10 minutes of the second half in the Vietnam - Timor Leste match because he had to find shelter from the rain.

"Although I have prepared for watching football in the rain, I still hope the weather is stable, ensuring playing conditions for the players," he said.

Thu Huyen and Yen Nhi (21, living in District 3) also prepared flags to cheer for the players. The two girls brought raincoats, ready to watch the match to the end regardless of bad weather.

“This is the first time we went to Nguyen Hue pedestrian street to watch football. We are happy because it has been a long time since we have had the opportunity to join this bustling atmosphere. At first, I wanted to find a seat close to the screen, but with this crowd, I feel bustling and vibrant everywhere I sit," Huyen said. 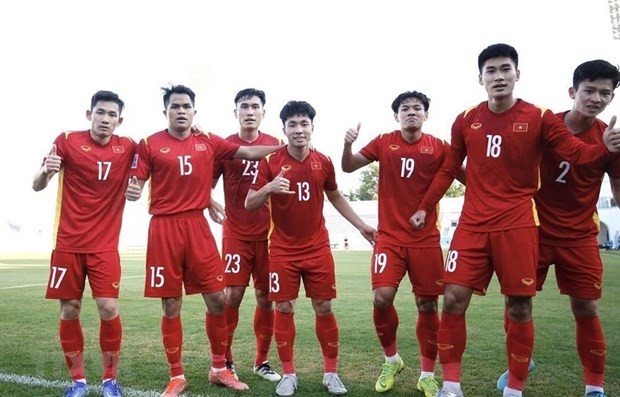