The colorful rose garden of a Vietnamese doctor in Japan helps him to reduce stress after tiring working hours and think up new ideas.
Malie Nguyen
Dieuhuong270198@gmail.com June 07, 2021 | 08:02

Nguyen Ngoc Mai Khanh, a Vietnamese doctor working at the center for circuit design and education under the University of Tokyo previously thought that gardening was time-consuming and more difficult than scientific research. At a party at school, I was really surprised when hearing one of his Japanese colleagues shared about his hobby of gardening, VnExpress reported.

“I was then taken aback because I didn’t think that technical people were into soft things like that. Nevertheless, when communicating with this colleague, I found that he was a neat, efficient employee who always stayed calm at meetings,” Khanh said.

Two years ago, Khanh moved to a new home in Matsudo city, bordering Tokyo and Chiba because he wanted to live near his work office and escape the hustle and bustle of the capital.

Because Khanh’s house is located at an intersection with many passers-by, he wanted to plant flowers to adorn his neighborhood. He then chose to grow roses.

As a scientist, he felt quite confused when growing flowers for the first time. Thus, he has joined groups of rose lovers and learned experience of plating roses on the Internet. Japanese people have various ways of taking care of land and roses, but, due to his tight schedule, he has learned the easiest way, which is focusing on tending roots and trimming branches appropriately.

To repel worms and bedbugs, Khanh has taken advantage of insects from the nearby park to catch them. He only catches earthworms, the most dangerous species by himself. The earthworm can amputate the entire roots of roses, he said.

Apart from 40 rose trees, Khanh grows climbing rose bushes on the fence. This type of rose often needs to be pruned.

Khanh only remains roses to bloom twice a year instead of all year round because he supposes roses need to stay “healthy” for the next season.

The above picture shows Japanese Urara roses. When bursting into full bloom, flowers make Khanh’s house the most outstanding in his neighborhood.

In Japan, roses show off their most gorgeous beauty in May and October when the weather is cool.

The above picture is Japanese La Marie roses. They are often used to produce perfume thanks to their strong aroma.

In addition, Khanh grows other kinds of roses such as Desdemona or Bordeaux.

These are Japanese thornless Mokobara roses that only bloom once a year. Flowers bloom very early. Japanese often plant this type on fences, while Khanh plants it in a pot.

It took Khanh five months to collect some varieties of ancient Vietnamese roses. In the first year of planting them in Japan, although trees produced many buds, they could not bloom and gradually withered due to the unsettled weather.

“Many people thank me for offering them the chance to admire flowers free. One person even gave me a tree. My neighbors, coming from South Africa, India, South Korea and China often visit my garden and check-in,” Khanh said.

“The rose garden is the best remedy for me to relieve stress after tiring working hours. It is also a source of inspiration for me to come up with new ideas,” Khanh said. 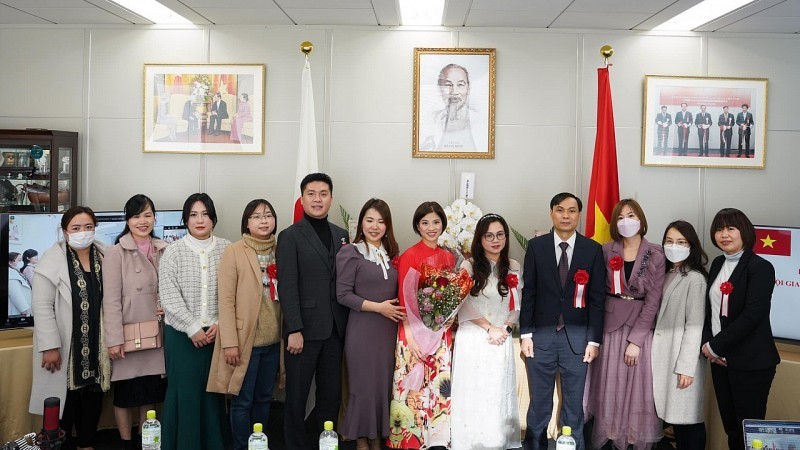 The Association of Vietnam-Japan Families has freshly debuted in Japan’s Kyushu-Okinawa region, grouping families whose spouses are Japanese.
December 27, 2021 | 13:39

“Xuan Que Huong” (Homeland Spring) Programme 2022, the biggest annual event held for overseas Vietnamese (OV) on the occasion of the Lunar New Year Festival, will be held on January 22, or the 20th day of the last lunar month of the Year of the Buffalo.
January 17, 2022 | 16:40
Phiên bản di động