Kitchen God (Ông Táo) Day falls on the 23rd day of the last Lunar month, only a week before Lunar New Year. As one of the most important celebrations for many Asia countries, Kitchen God Day bears meaningful stories behind.

Who is Kitchen God?

As for Chinese people, the Kitchen God – also known as the Stove God, named Zao Jun, Zao Shen, or Zhang Lang – is the most important of a plethora of Chinese domestic gods that protect the hearth and family. Traditionally, every Chinese household would have a paper effigy or a plaque of Zao Jun and his wife (who writes down everything that is said in the household over the year for her husband's report to Jade Emperor) above the fireplace in the kitchen. This tradition is still widely practiced, and Zao Jun was the most highly worshiped god of those who protects the household and family.

Known in English as the Kitchen God, Ong Tao in Vietnamese culture is a pretty eccentric character. He sticks strictly to rubber boots and shorts under his áo dài, and in the final week of the lunar year, he rides a carp to heaven to report the news from earth. For all his oddities, the story of this venerated figure is not so lighthearted. In fact, Ong Tao himself is the amalgamation of three separate figures – Tho Dia, Tho Cong, and Tho Ky – who oversee matters of the family, business, and kitchen, respectively, according to Urbanist Hanoi.

It is believed that on the twenty-third day of the twelfth lunar month, just before Lunar New Year, the Kitchen God returns to Heaven to report the activities of every household over the past year to the Jade Emperor. The Jade Emperor, emperor of the heavens, either rewards or punishes a family based on Kitchen God's yearly report.

Although residents in each region across the country pay their homage to the Kitchen God in slightly different ways, the gods remain important figures in the rich texture of Vietnamese New Year. The fire in the kitchen is the symbol of not only a warm family union but also a bumper harvest and agricultural development of Vietnamese people. The custom of worshipping the Kitchen Gods reflects Vietnamese’s respect for family happiness.

The legend of Kitchen God

Once upon a time, there was a poor couple who often struggled to make ends meet. The husband, a woodcutter, grew bitter about their circumstances and took up drinking to ease his sorrow and later began to beat his wife. Fearing for her safety, the woodcutter’s wife fled the house, wandering aimlessly through the forest until she came upon the house of a hunter. The man took her in and gave her a place to stay. Over time, the two became husband and wife. They lived together happily, and the wife was glad to be rid of her former husband.

Meanwhile, the woodcutter regretted his actions. Depressed and alone, he set out in search of his wife to make amends.

One day, on the 23rd of the final lunar month, the wife was burning votive paper in the front yard when a beggar turned up, asking for food. In no time at all, the wife recognized her former husband, who had lost everything. Taking pity upon him, she brought him some rice and money but, fearful of what her new husband might think, tried to conceal this from the hunter.

When the hunter came home, however, this did not go over well. Jealous and angry, he began to give his wife a hard time and she, overcome with grief at the state of her former husband and depressed by her current husband’s response, committed suicide by jumping into the kitchen fire. Devastated at having caused this mess, the woodcutter soon followed, and the hunter, realizing he might have overreacted to the situation, also killed himself. For their faithfulness, the trio was thus assigned to oversee affairs of the home, business, and kitchen; it is for this reason that traditional Vietnamese clay stoves have three prongs upon which to set cooking pots and pans.

Over time, the three gods, collectively known as Tao Quan, were fused into Ong Tao, a single figure in rubber boots and a dragonfly-winged hat. On the 23rd day of the last month of the lunar year, Ong Tao mounts a carp and rides to heaven to report the goings-on of the living.

Vietnamese people in the north normally hold the ceremony early, preparing a tray of offerings from the 20-23 days of the last lunar month. Not many people conduct ceremonies after that because they believe the Kitchen Gods have already gone to Heaven.

The difference between the ritual in the north and in other regions is the majority of families offer carp as offerings. Depending on each province and family, the carp can be real or made of paper. While live carp are placed on a tray and set free after the ceremony, the paper carp are burnt to help the Gods travel to Heaven, said Vietnam Insider.

The tray of offerings is not complete without paper clothing for the Gods, which is also burnt after the ceremony. Other offerings are mainly traditional food like steamed sticky rice, boiled chicken, Vietnamese pork sausages, spring rolls, and dried bamboo shoot soup.

The ceremony to worship the Land Genie and the Kitchen Gods in the central region is considered the most sophisticated in the country. Instead of paper clothing that includes hats, robes, and boots intended for the genies on their trip, people in central provinces offer a paper horse with a saddle, votive papers, and many other items to the Gods.

The first thing they do is remove old incense sticks from the burners and clean the altar. After the ceremony has finished, families carry three terracotta statuettes of the Kitchen Gods to shrines in their villages or place them under ancient trees. After bidding farewell to the old statues, they place new ones on their altars to welcome the new year.

People in the central province of Thua Thien - Hue also erect a "nêu" pole in front of their house or in yards of communal houses on the morning of Kitchen Gods’ Day to scare off evil, signal the arrival of the new year and pray for favorable weather and bumper crops.

According to Vietnam News, the ceremony in the south usually takes place at night, from 8-11 pm. According to their beliefs, the ceremony should be conducted at the end of the day after families have finished their dinners. At that time they do not use the kitchen to cook and therefore do not disturb the Kitchen Gods.

Besides traditional food like spring rolls, pork sausages, and "hưng" cakes, their offerings include stuffed sticky rice balls, peanut, and black sesame candy bars, and votive papers printed with flying storks and running horses. Instead of paper carp, southern families burn these votive papers with the hope of sending the Kitchen Gods back to Heaven quickly. 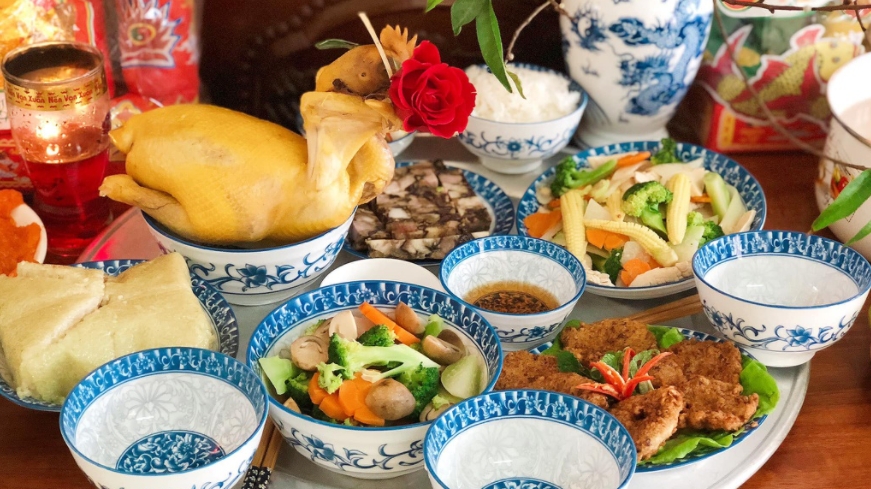 On the 23rd day of the last Lunar month, every Vietnamese family prepares a decent food tray to send the Kitchen God (Tao Quan) to heaven. Depending on local traditions, each region in Vietnam has its special way to offer the Kitchen God.
February 02, 2021 | 11:14