Twenty five out of 33 people in close contact with Hà Nội’s first COVID-19 patient have tested negative for the virus, according to the latest reports from the municipal Department of Health at an urgent meeting on Saturday morning.

The remaining eight, including the patient’s driver and uncle, have also been tested by the municipal Department of Health. The results of these tests have not yet been confirmed.

The department has drawn up a list of 90 other people who have been in close contact with the 33. All will be tested for the virus.

The department is working with Nội Bài International Airport to collect information about passengers and crew members on the same flight as the patient to implement follow-up prevention measures.

Chairman of Hà Nội’s People’s Committee Nguyễn Đức Chung said more preventive measures were needed at Hồng Ngọc Hospital where the patient had a check-up and asked relevant agencies to follow up on the health status of those this in close contact with the patient so quarantine measures can be put in place.

The health department said flight VN0054 that the patient took to back to Việt Nam had 197 passengers and crew members on board. Eight people – her father, uncle, cleaners and a driver – had close contact with her at home.

Eighteen people at Hồng Ngọc Hospital had contact with the patient.

All of these people have so far shown no symptoms of fever or coughing, according to the department.

The female patient, residing on Hà Nội’s Trúc Bạch street, tested positive for the novel coronavirus SARS-CoV-2 on March 6 after returning from Europe and has been quarantined at the National Hospital of Tropical Diseases.

Disinfectants have been sprayed at the patient’s house, Hồng Ngọc Hospital and houses of people in contact with her.

All 22 households with 176 people living on Trúc Bạch street where the patient resides have been put under quarantine, according to Hà Nội's Party Committee Secretary Vương Đình Huệ at an urgent meeting held in Hà Nội on Friday evening.

Trúc Bạch street where the patient lives was sterilised on Saturday morning.

This is the 17th COVID-19 infection case in Việt Nam. The previous 16 patients have been successfully treated and discharged from hospital.

Hà Nội has decided to close schools of all levels in Hà Nội until March 15 after the city reported the first case of COVID-19, according to Chairman of Hà Nội People's Committee Nguyễn Đức Chung.

The national steering committee for COVID-19 prevention and control has sent an urgent official dispatch to the Ministries of Public Security and Transport, and the People’s Committee of Ha Noi, asking them to investigate and deal with any possible outbreaks related to the newly confirmed patient in the city.

The Ministry of Public Security was requested to instruct relevant units to verify addresses of passengers on flight VN0054 and inform local authorities so as to quarantine these people and monitor their health in line with regulations.

Meanwhile, the Ministry of Transport was asked to direct competent units to provide the list of passengers on the same flight as the patient to monitor their health and conduct quarantine as needed.

The Ministry of Transport was also urged to sterilise relevant aircraft and areas where the patient had been or used services at Nội Bài International Airport to prevent the spread of the virus.

The steering committee requested the Hà Nội People’s Committee to coordinate with units of the Ministry of Public Security to investigate and make a list of people in close contact with the confirmed patient, including the aircrew and passengers on flight VN0054 and ground staff at Nội Bài airport to quarantine and monitor their health.

Those in close contact with the patient must be quarantined at medical establishments while their samples and samples of the patient’s family members must be sent to the National Institute of Hygiene and Epidemiology for testing, the steering committee said.

The municipal People’s Committee must thoroughly sterilise the houses of the patient and neighbouring families as well as vehicles used to transport the patient and other related offices and areas, if any.

A 26-year old Vietnamese woman returning from Europe became the 17th case in Vietnam after the nation had gone 22 days with no new infection, authorities confirmed late Friday night.

She has been quarantined and is undergoing treatment at Campus No.2 of the Hanoi Central Hospital for Tropical Diseases.

"I urge Hanoi people to stay calm and yet remain on high alert," Chung told the media Friday night.

Soon after information about the new infection was released, Hanoi residents rushed to buy food and essential supplies at supermarkets for stocking up at home so as to avoid going out and contacting too many people in the coming days.

Saying that Hanoi has the highest risk of hosting an outbreak as residents of almost all 90 countries and territories hit by the new coronavirus so far are now living and working in the city, Chung said: "I urge everyone to be aware of the risks of infection and how dangerous the epidemic is. Everyone returning to Vietnam from abroad needs to report themselves to the authorities and follow quarantine protocol as regulated.

"The authorities are still tracking down anyone that has been in close contact with this patient so as to quarantine them," he said.

For now, 29 such people have been identified.

The latest Covid-19 patient had left Hanoi's Noi Bai Airport on February 15 to visit family members in London, England. Three days later, she travelled from London to Milan City in the Italian province Lombardy and returned to London on February 20.

During her time in Milan, Lombardy had not recorded any Covid-19 positive case.

On February 25, the woman travelled from London to Paris to visit her sister. She contracted a cough on February 29, but did not get her health checked by a doctor.

On March 1, she reportedly felt body pain and fatigue, but it was unclear if she had a fever. The same day, she boarded flight VN54 of Vietnam Airlines from London and landed in Hanoi at 4:30 a.m. on March 2. She did not have a fever then.

Later, she developed a mild fever and a severe cough, and was admitted to the Hong Ngoc Hospital in Ba Dinh District Thursday. The very same day, she was transferred to the Central Hospital for Tropical Diseases where she tested positive for the novel coronavirus.

Eight of the patient’s family members – her father, uncle, five janitors and a personal chauffeur are also being isolated at the Central Hospital for Tropical Diseases. All are reportedly healthy, with no signs of fever or cough.

Seventeen doctors from Hong Ngoc Hospital who had been in contact with the patient are also being isolated at the hospital, and in good health.

Flight VN54 had carried 201 passengers and crew members, and authorities are in the process of verifying their names and whereabouts.

After Vietnam reported its 16th Covid-19 infection on February 13, the nation went 22 days without detecting any new case . All the 16 patients have recovered and been discharged from hospitals.

As of Friday, 23,228 people were being isolated at home or in communal facilities across the country, an increase of 9,000 compared to the day before, while another 101 infection suspects are being isolated in hospitals.

The Covid-19 outbreak broke out in China’s Wuhan City, Hubei Province in late December last year. By Friday, the disease had infected over 102,200 people worldwide and killed 3,495, mostly Chinese citizens.

Italy had recorded more than 4,600 infections as of Saturday morning with 197 deaths, making it the country with the second highest number of deaths after China.

Hanoians started to stock up on supplies Friday night as soon as the capital’s first Covid-19 infection was confirmed by local authorities.

Almost immediately after local authorities announced a confirmed Covid-19 infection in the capital city Friday night, many residents of Time City, an urban area in Hanoi’s Hai Ba Trung District, rushed out and spent the whole night shopping to stock up on food.

A Time City resident brought a large bag to buy food during the night shopping rush. The nation’s 17th Covid-19 patient has been quarantined and is undergoing treatment at Campus No.2 of the Hanoi Central Hospital for Tropical Diseases, the capital city’s Chairman, Nguyen Duc Chung, said at an emergency meeting held late Friday.

On average, each household seemed to use three baskets to buy food, with considerable focus on milk, egg, rice and cookies with long expiration dates.

Choice pickings of vegetables and meat went to early birds and latecomers had no choice but to picking leftovers on the shelf.

A rice shelf with around 10 packages left. Around 1.30 a.m, most shelves were on the verge of being emptied by the late night shoppers.

My Linh from Linh Dam said she bought enough supplies for 10 days in case there is an outbreak in Hanoi. "I bought mostly rice, vegetables, pork. I also bought instant noodles but not much because my family may not be able to consume it all," she said.

Lan, a representative of a convenience store in Ha Dong District said customers started queuing from 11 pm until 2 am. "We have never been such overwhelmed. We have to ask that each customer is allowed to buy only two cartons of instant noodles and 30kg of rice. We don't have much supply," she said.

Also in Ha Dong District, Cao Tuan Ninh said when he went out to buy instant noodles at 1 am, everything was sold out within five to seven minutes.

Cuong from Gia Lam District said he walked 5 km and queued 30 minutes in order to buy toilet paper and instant noodles. When he returned home, it was 2 am. "I've never had to queue before but today, rice, vegetables and fruits were all sold out. The prices didn't increase though," he said.

In the morning of March 7, supermarkets and shopping centres were overcrowded. Meat and fish shelves were nearly empty. Long queues can be seen at supermarkets even though it was only 8 am. 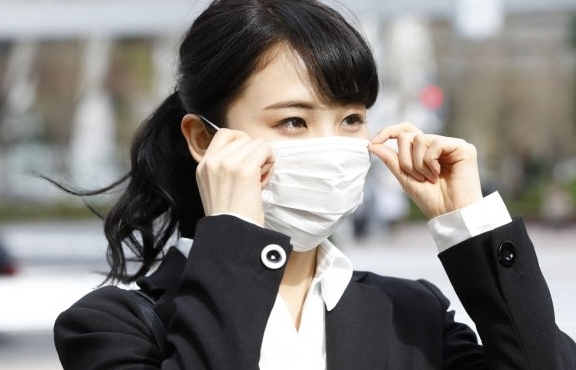 The Covid-19 pandemic has killed more than 33,900 people in 199 countries and territories, made more than 722,000 people infectious. The super small virus is worrying and threatening any human parts on the earth, so is Vietnam, when the epicenters are two biggest centers of population and development.
March 30, 2020 | 10:53 How Asia fend off hoarders amidst coronavirus panic?

Authorities from Japan to Thailand to India among others are making efforts to bar their citizens to store up commodities due to the fear of the novel coronavirus or Covid-19 outbreak recently.
March 10, 2020 | 19:12