A festival to celebrate the 45th founding anniversary of the Vietnam – Germany diplomatic ties was held in Leipzig city, the German state of Sachsen, on February 23. 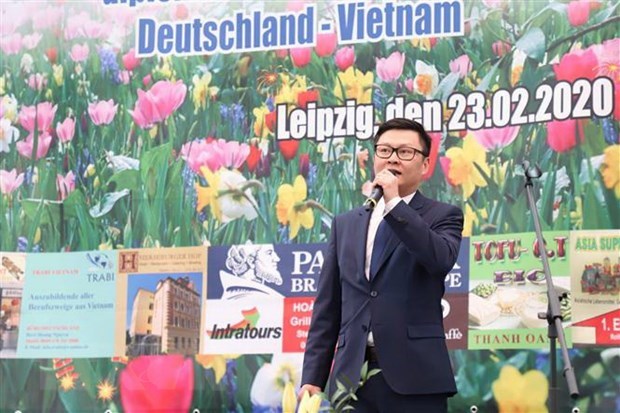 Counsellor at the Vietnamese Embassy in Germany Dang Chung Thuy speaks at the event (Photo: VNA)

The event was jointly hosted by the Vietnamese Association in and the women's association of Leipzig city.

In his speech at the event, Vice Chairman of the Vietnamese Association in Leipzig Nguyen Manh Dan highlighted the significance of the festival, saying that it marks the close solidarity, cooperation and friendship between the two countries.

The festival spotlighted Vietnam’s cultural identities, and friendliness and hospitality of Vietnamese people through art performance programmes and fashion shows.

Meanwhile, Counsellor at the Vietnamese Embassy Dang Chung Thuy praised efforts made by the Vietnamese community in Leipzig and vicinities in organizing the festival.

He said Leipzig is one of the German localities leading the way in cooperation with Vietnam, especially the effective cooperation between the German city and Ho Chi Minh City.

Held in parallel with events at the Leipzig international fair 2020, the festival attracted a large number of German friends and international visitors.

It offered a great chance to promote the images of Vietnam’s land, culture and people to international friends./.