The Ministry of Foreign Affairs on February 25 held a conference to review activities abroad honouring President Ho Chi Minh - a hero of national liberation and a great man of culture - over the past decade.
VNA
February 26, 2020 | 16:35 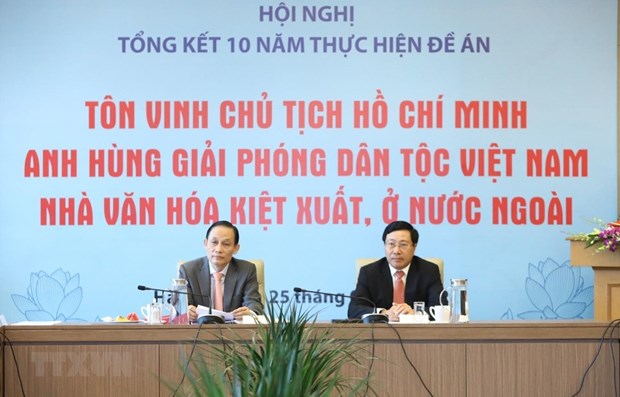 In his remarks, Deputy Prime Minister and Foreign Minister Pham Binh Minh stressed the significance of the UNESCO Resolution adopted in 1987 marking the centennial birthday of President Ho Chi Minh as a hero of national liberation and a great man of culture.

The document said the President is an outstanding symbol of national affirmation, who devoted his whole life to the national liberation of the Vietnamese people, contributing to the common struggle of peoples for peace, national independence, democracy and social progress.

It also highlighted the late leader’s important and multifaceted contributions in the fields of culture, education and arts, Minh said.

Over the past ten years, ministries, agencies, localities and overseas representative offices of Vietnam have carried out plans and activities to honour President Ho Chi Minh as a hero of national liberation and a great man of culture, helping promote Vietnam’s image to the world, he stressed.

He added that more work needs to be done in order to raise the efficiency of these activities, while ensuring the sustainability and pervasiveness of their outcomes.

According to Deputy Foreign Minister Le Hoai Trung, various activities have been organised in all continents through the network of Vietnamese representative offices to commemorate President Ho Chi Minh.

Such activities have received the warm response of local political parties, scholars and media, contributing to spreading the President’s thought, morality, personality and talents, he said.

In addition, a total of 35 statues of President Ho Chi Minh have been installed in 22 countries worldwide, he said, adding that apart from relic sites, many museums and memorial sites dedicated to the Vietnamese leader have been built and upgraded.

Many countries have also named schools, streets and squares after President Ho Chi Minh and issued publications and made films featuring his life and career, Trung said.

On the sidelines of the conference, the foreign ministry and the State Records And Archives Department of Vietnam co-organised an exhibition on President Ho Chi Minh./.