The practice was held periodically at the end of every lunar year under the Nguyen Dynasty.

In the past, the agricultural economy was key to Vietnamese people, thus the calendar book played a pivotal role in helping people track the time, acknowledge of weather changing patterns to promptly respond and avoid the different natural disasters.

Ban Soc ceremony was held on a large scale at the beginning of the Minh Mang Dynasty. Once the calendars were finished, the court would hold the ceremony.

In the photo, a spokesperson is telling the historical and cultural meaning of Ban Soc ceremony to attendants.

In 1984, the Ban Soc ceremony was instructed by Emperor Minh Mang at Ngo Mon gate. Calendar books are given to residents.

The calendars are brought into the Royal Palace for the Royal Family to use, the calendars were distributed to the mandarins in the Imperial City, in localities and distributed among the public to use according to Zing News.

On New Year's Day, many visitors are excited to be greeted with a solemn welcome upon their visit to Dai Noi relic, Hue city.

On this occasion, Hue Monuments Conservation Center opened the Ngo Mon space after a long restoration. 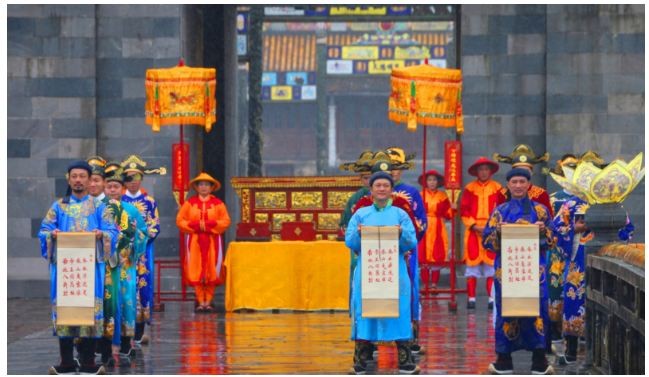